Standing in a winding queue in downtown Harare, Zimbabwe’s capital, Judith Kapito, 38, cannot hide her excitement: she is waiting to receive a new identity document, one that will offer her rights and opportunities she has long been deprived of.

Kapito was born to Malawian parents who migrated to Zimbabwe - then Southern Rhodesia - in 1960. She lost her citizenship in 2001, when the government’s amendment of the Citizenship Act forced those born of alien parents to renounce their foreign citizenship.

Kapito, who was born in Zimbabwe and registered as a national of the country, had no other citizenship to renounce. She became stateless, and remained so until the country’s new constitution, passed in April 2013, restored her status as a Zimbabwean.

“For 10 years, I had no identity, just a name. I had no country to call mine because the government of Malawi, where my parents came from, did not consider me as its citizen and could not help me in any way.”

The processing of documents at the Registrar General’s office has been slow, but Kapito remains upbeat. “I am happy that there is now… a new constitution that brings back my citizenship, and I see so many opportunities ahead of me,” she told IRIN.

Once she acquires her new passport, Kapito plans to become an informal trader, buying hairdressing chemicals from Botswana for resale in Zimbabwe.

“My citizenship was taken away at a time when things were bad in Zimbabwe, and it was difficult to make ends meet. I could not cross the border, not even to Malawi, which was supposed to be my country, and thus could not make money as other traders were doing,” she said.

In 2000, an economic and political crisis began when the government of President Robert Mugabe forced out thousands of white commercial farmers to resettle black Zimbabweans, leading to the displacement of former farm workers, massive unemployment levels and acute shortages of basic commodities. The move also forced millions of people to migrate and others to rely on cross-border trade to earn a living or access food.

Kapito’s statelessness followed soon after. The 2001 amendment prohibited dual citizenship; people who had migrated to Zimbabwe had to renounce their natural citizenship before they could acquire a Zimbabwean one. Kapito did not have the details, such as the name of her Malawian village head, needed to acquire a Malawian passport from the embassy in Harare, which she could then renounce.

Since then, the challenges have been myriad. An unemployed widow with three school-going children, she has been struggling to get a court directive to inherit and sell an old truck that her late husband left behind because she could not obtain a marriage certificate; both she and her husband were considered foreigners who could not legally marry in Zimbabwe.

Kapito is among thousands of migrants and their descendants to face such difficulties.

Her neighbour, Duncan Sapangwa, 30, whose parents also migrated from Malawi, hopes that restoration of his Zimbabwean citizenship will help him open a bank account for his small carpentry business.

“Banks always turned my applications for a loan down because they said I was an alien who could run away from Zimbabwe any time. I have no doubt that my business would have grown if I had access to a loan,” Sapangwa told IRIN.

The Harare municipality also refused to put him on the city’s housing waiting list, he said, because of his "alien" status.

“I have many relatives who used to work on white farms but were chased away by the new owners. The government said they could not be resettled under the land reform programme because they were foreigners, and they ended up as beggars on the streets. Since we are now citizens once again, we hope the future will be better,” he added.

According to the Harare-based Research and Advocacy Unit’s December 2008 report, A Right or Privilege: Access to Identity and Citizenship in Zimbabwe, the law prohibiting dual citizenship left thousands stateless, most of them young people. 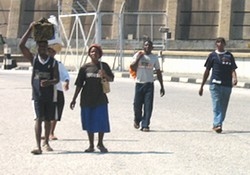 “Among the most affected are young generations of Zimbabweans whose grandparents migrated from Malawi, Mozambique, and Zambia” for a variety of reasons, including war, famine and unemployment back at home, said the report.

Thabani Mpofu, spokesperson of the Crisis in Zimbabwe Coalition (CiCZ), told IRIN it was difficult to establish the exact numbers of those considered aliens living in Zimbabwe as no formal study has been conducted, but he said the figure could run to “several hundreds of thousands”.

The acting president of the Zimbabwe Chamber of Informal Economy Associations, Lucia Masekesa, accused the government of having been insensitive towards migrants and their families.

“The political leadership in this country failed to consider the plight caused by taking the so-called aliens’ citizenship away... Nothing was done to cushion them,” she told IRIN.

Once Kapito and Sapangwa receive proof of citizenship, they will be able to exercise the rights due any other citizen of Zimbabwe, including, crucially, the ability to vote in the impending general elections.

Kapito was prevented from voting in the 2000 general elections because of widespread political violence against perceived opponents of the government. Afterwards, considered an alien, she was unable to vote in the 2002 presidential election or the 2005 and 2008 parliamentary polls.

Mugabe, who has been in power for more than three decades, set 31 July 2013 as the next election date. This decision was met with an outcry from the opposition, who pointed out that amendments to electoral laws were still being debated and that the voter registration exercise needed more time. The South African Development Community has since intervened, asking Mugabe to extend the date to 14 August.

Whatever the date, Kapito says she is happy she will finally be able to cast her vote.

Still, Arnold Sululu, a member of parliament and of the parliamentary committee on home affairs and defence, warned that it was too early for many to celebrate the restoration of their citizenship.

“Many people of migrant origin are facing problems getting new identity documents and passport[s], and it may be a while before normalcy returns," he said.