In London on 8 June, UK Prime Minister David Cameron, together with an array of presidents, prime ministers, businesspeople and philanthropists, signed the Global Nutrition for Growth Compact, an agreement to improve the nutrition of children and pregnant women around the world. Inside the meeting room, organizers said they had secured new commitments of up to US$4.15 billion to tackle undernutrition between now and 2020; outside, in Hyde Park, activists laid a carpet of flower petals to represent the lives of children lost each year through malnutrition.

The children represented by those petals do not starve to death. Rather, many of them die of diarrhoea, pneumonia, malaria or measles - the usual child-killer diseases - but under-nutrition is an underlying factor in many of these fatalities. Being poorly nourished more than doubles a child’s likelihood of dying.

A major new Lancet series on maternal and child nutrition attempts to quantify the damage done by poor nutrition. Taking into account infant mortality linked to undernourished mothers and nutrition-linked birth defects, the authors of the study estimate that poor nutrition is the root cause of 45 percent of child deaths - 3.1 million deaths among children under age five each year.

Mortality figures would seem to be the ultimate measure of the world’s failure on nutrition, but the broader damage, say many in the field, is to children’s long-term development.

Sally Grantham-McGregor, of the Institute of Child Health, said, “Really, we have to move on from the outcome being death. We know that once children get severely malnourished, their development is going to be bad. Once a child is severely malnourished, feeding alone will only save their lives, not their brains. We are perpetuating the cycle of poverty, and we have got to break it.”

There has been progress since the last such report was published five years ago. The number of the world’s children who are stunted - who never grow to their potential height - has dropped steadily over the past two decades, from more than 253 million in 1990 to 167 million in 2010. The drop has been especially dramatic in Asia. In Africa, the percentage of stunted children has dropped, but population growth means that the numbers affected have actually risen.

In the past five years, there has also been a steady accumulation of knowledge about what works to reduce malnutrition. This new Lancet series aims to go further than its predecessor by presenting a list of 10 interventions whose effects are backed by scientific evidence.

The authors estimate that if this package achieves 90 percent coverage in the 34 countries with the highest malnutrition burdens, it could save nearly a million lives a year at a cost of $9.6 billion.

The lead author of the paper on interventions, Zulfiqar Bhutta, of Pakistan’s Aga Khan University, said, “We believe that these 10 nutrition-specific interventions have the potential to save lives. The cost is affordable for a world which spends close to a hundred times more than this on conflict.”

A girl has her arm measured as part of a weekly nutritional assessment organized by DIAL, a local NGO and UNICEF partner, in Ras Kamboni, Somalia (July 2012) 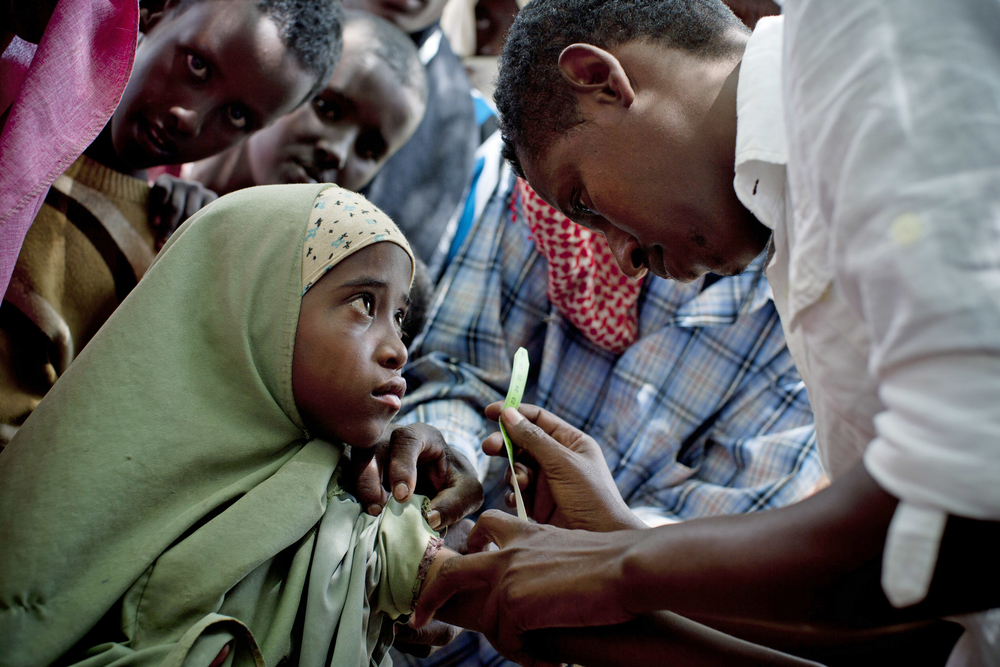 The World Food Programme (WFP) has welcomed the proposed package. Its executive director, Ertharin Cousin, told IRIN, “We believe that it’s very helpful, a recognition that the provision of interventions does make a difference in an area where WFP has a comparative advantage - distributing micronutrient support to mothers and to children… And we have now announced a partnership with UNFPA [the UN Population Fund] where we will support pregnant and lactating women’s access to nutritious food, as well as adolescent girls.”

Interventions that do not directly involve nutrition also have a role to play. The health of adolescent girls, their education level, and the age at which they marry and start to have children all affect the nutritional status of their children. Targeted agricultural programmes can improve child nutrition, as can social safety nets and other programmes to reduce poverty. But one of the hurdles to improving mother and child nutrition is that it must bring together many different disciplines and agencies.

Better nutrition is now a more high-profile cause than it has been in the past. The food price spike of 2008 brought the issue to the fore, and the UN high-level panel on post-2015 development goals has recommended the inclusion of a separate goal on nutrition.

But Lancet editor Richard Horton told a symposium on the series: “The high-level panel is only one strand of [a] series of political processes that are taking place over the next six to 12 months. So although we should feel good that nutrition and food security are there, we should not be complacent about its position in the political process.”

Talking about ways of building commitment on the issue, Lawrence Haddad, the director of the UK’s Institute of Development Studies, stressed the need for political action. “You don’t often see the words ‘politics’ and ‘malnutrition together’… but international development is political - no two ways about it. And malnutrition is potentially more political than some other issues because it needs lots of different actors to come together to act in concert towards something that none of them could achieve on their own, and that requires a lot of coordination and alignment of incentives… Also, we know that malnutrition in many of its guises is invisible.”

Haddad says malnutrition must be reduced through deliberate action. Improvements in nutritional status tend to lag behind economic growth, he said, meaning people must apply pressure to make their leaders fulfil their commitments.“ Let’s will the politicians to act,” he said.