Tibetan refugees in Nepal, many of who have been here for decades, say they lack the documentation they need to lead normal lives.

“Without any form of identification paper, I don’t know where I belong. There is no future for me in Nepal,” Palden Lama, a Tibetan refugee, told IRIN outside a refugee settlement in Pokhara, Nepal’s second city. The 25-year-old was born in the settlement and has lived his entire life in Nepal.

Nepal is home to at least 20,000 Tibetan refugees, many of whom fled south across the Himalayas following the 1959 Tibetan uprising against Chinese rule in Lhasa, the capital of the Tibet Autonomous Region. Tens of thousands were reportedly killed.

Each year hundreds continue to transit through Nepal to India, home of Tibet’s exiled spiritual leader the Dalai Lama and seat of the Tibetan government-in-exile. There are more than 100,000 documented Tibetan refugees living in India.

Currently, there are 11 Tibetan refugee settlements in Nepal, with an estimated 9,000 people living in Kathmandu alone.

Under normal circumstances, most pre-1990 arrivals, qualifying as bona fide refugees, should have been documented and given refugee cards (RCs) by the government, allowing them the right to live and work in the country, as well as access to basic services.

“There has been no decision made yet,” Shanker Koirala, a senior government official with the Home Ministry, told IRIN regarding the Tibetans, adding that he had “no other comment” - a position many believe underscores government sensitivity on the issue and relations with neighbouring China.

According to the Human Rights Organization of Nepal (HURON), a prominent rights group campaigning on behalf of Tibetan refugees, Kathmandu, under pressure from Beijing, stopped issuing RCs to Tibetans in 1995, including children born in Nepal to refugee parents who had been residing in the country for decades.

“Their lack of an RC or any form of documentation means they are totally stateless and have absolutely no place in this world,” Sudeep Pathak, head of HURON, explained.

“There is a fundamental need for documentation - whether refugee identification or citizenship - for Tibetans in Nepal,” said Kate Saunders, a senior official from the International Campaign for Tibet, noting a large number of Tibetans in Nepal are effectively stateless, vulnerable to political exploitation, and unable to benefit from state services or travel without the threat of harassment, extortion or detention.

“It’s a very difficult situation for us especially after we finish school because we need a valid document to prove we are residents of this country,” said Pema, a high school student in the Tashi-Paikheli Settlement in Hyangjha village.

“This is such a wrong time to be a Tibetan,” said one young Tibetan refugee in Kathmandu who preferred anonymity.

An old Tibetan woman sells souvenirs to western tourists for livelihood which is key source of income for many Tibetans but less tourists are buying. There an estimated 15,000 Tibetan refugees in Nepal, more than half of which are undocumented 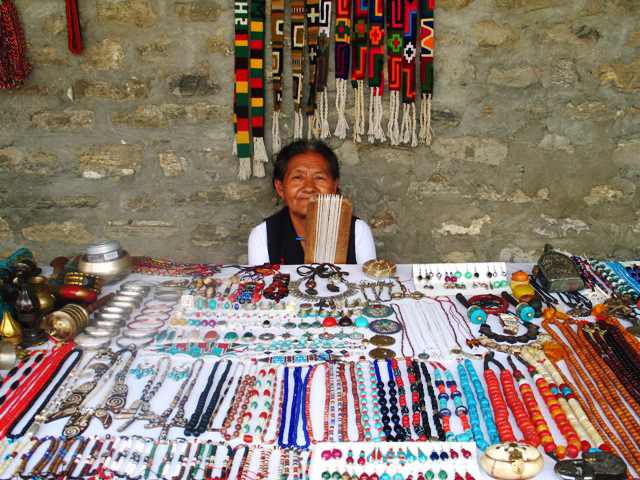 Tibetans in Nepal say they face restrictions from Nepalese authorities, particularly around significant Tibetan anniversaries, with activists accusing Beijing of using aid and investment in Nepal to ensure the government prevents any anti-Chinese activity.

“China is determined that Nepal should not become a breeding ground for activists campaigning for an independent Tibet. It fears that Tibetan refugees, who enjoy considerable sympathy and support in India and the West, will use Nepal as a base to protest against the Chinese occupation and to carry out `anti-China activities’,” said a 2012 report by Safer World, an independent international organization working to prevent violent conflict.

But according to one activist who has worked with the Tibetans for years, their desire for documentation now has nothing to do with politics, but rather a desire to live in peace and dignity in Nepal.

“I have worked with thousands of Tibetan refugees in the past 20 years, but I have not met anyone express any interest in anti-China activities. All they want is a safe and legitimate residence in Nepal where they can live with freedom as local citizens,” said Nilkantha Sharma, chief of Sambad Nepal, an NGO supporting Tibetan refugee rights in Pokhara.

Nepal is not party to the 1951 UN Convention or 1967 Protocol Relating to the Status of Refugees and there are no national laws to grant asylum or refugee status.