Aid workers are calling for better health access for an estimated 140,000 internally displaced persons (IDPs) in Myanmar’s western Rakhine State, most of them Rohingya Muslims.

Although a number of NGOs and government mobile clinics are providing basic health services inside the roughly 80 camps and settlements, they are limited, and emergency health referrals remain a serious concern, they say.

According to Médecins Sans Frontières (MSF), conditions inside the camps, combined with the segregation of ethnic Buddhist Rakhine and Muslim Rohingya and ongoing movement restrictions, are having a severe impact on health care.

Movement restrictions were slapped on Rohingyas around Sittwe, the Rakhine State capital, after bouts of sectarian violence in June and October 2012.

Another concern is the negative attitude of many ethnic Rakhine to assistance provided to Muslim IDPs.

“With threats and intimidation both to health provider and patient, this becomes an irreconcilable dilemma,” Carol Jacobsen of the medical NGO Merlin told IRIN, adding that “hostile access”, limited transportation and poor security were obstacles to health care for the Muslim population.

Aside from IDPs, thousands of Rohingyas in their villages or places of origin - many reachable only by boat - are restricted from travelling to local township hospitals in the event of a medical emergency, aid workers report.

“MSF has just returned from areas where whole villages are cut off from basic services,” said Ronald Kremer, MSF emergency coordinator in Rakhine State. “What we have seen shows that current policies such as movement restrictions are having a detrimental impact on people’s health. This includes TB patients unable to access the treatment they need to stay alive, and pregnant women dying unnecessarily because they have nowhere safe to deliver.”

It’s estimated there are 5,000 pregnant displaced women living in the camps.

“Normally, these women would be going to government hospitals or clinics,” said Marlar Soe, field coordinator for the UN Population Fund (UNFPA) in Sittwe, noting that government midwives, who are largely ethnic Rakhine, are not going into the camps.

Almost one year after the initial violence in Rakhine State, more than half the IDPs are in Sittwe, one of nine strife-affected townships. Most Rohingyas are confined to a series of camps on the outskirts of the town.

Security forces and metal barricades, topped with razor wire, prevent camp residents from leaving what activists are now describing as a ghetto-like prison.

Thee Chaung Camp, near Sittwe, Rakhine State, Myanmar. An emergency evacuation team transfers a young child from a health post in Thee Chaung Camp to Sittwe hospital. Access to health care is a major problem for people who have fled to camps outside Sittw 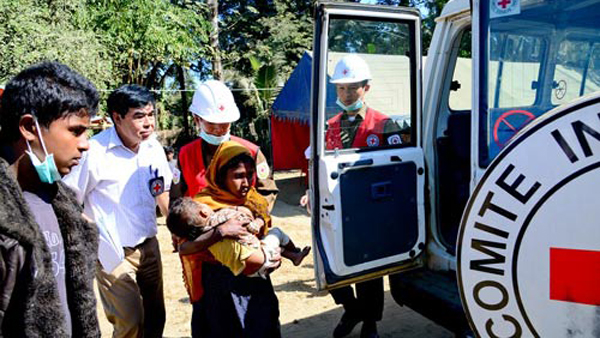 Call for action on hospitals

The 12-bed Dar Pai emergency hospital is the only government-run health facility for the more than 100,000 Muslim IDPs and residents in an area which encompasses 11 IDP camps and makeshift sites, as well as five Rohingya host communities.

Doctors are rarely seen and medicine is in short supply, say IDPs.

“You’re lucky if you can get an aspirin there,” said Aung Win, a 57-year-old Rohingya man from the Mawlee quarter of Sittwe, referring to the hospital.

Edward Hew, head of relief operations for Mercy Malaysia, says it is time for the international community to come together with state health authorities to strengthen the Dar Pai hospital as it is currently the only option available. “Many patients are not comfortable with being referred to Sittwe Hospital,” he said.

The International Committee of the Red Cross (ICRC) currently provides emergency medical evacuation services to Sittwe Hospital. “This, however, is not always easy given the security situation, as well as the limited number of beds [12] allocated for Muslims,” said one aid worker who preferred anonymity.

Meanwhile, with monsoon rains having begun, there is growing concern about the risk of water-borne and communicable diseases.

“Many of the risk factors for an outbreak are present, including overcrowding, open defecation, limited potable water, poor hygiene standards and many living in makeshift shelters,” said Ingrid Maria Johansen, project coordinator for MSF in Sittwe, warning that an outbreak of acute watery diarrhoea could spread quickly through the camps.