This week marks five years since tensions between foreigners and South Africans living in impoverished communities across the country erupted in xenophobic violence, leaving more than 60 people dead and tens of thousands displaced, their homes and businesses robbed and abandoned.

Since May 2008, various initiatives have been established to detect early warning signs of future xenophobic attacks and to improve responses. But while no further outbreaks have occurred on the scale of the violence five years ago, attacks on foreign nationals have continued. On average, one person was killed every week in 2011, according to the Consortium for Refugees and Migrants in South Africa (CoRMSA).

The looting and victimization of foreigners has also remained a feature of the frequent service delivery protests that have rocked South African townships in recent years, as has the near impunity of perpetrators.

In a statement released on 13 May, CoRMSA concluded that “much more still needs to be done to promote peaceful communities”.

Philippi Township, 25km southeast of Cape Town, has been a hotspot for xenophobic violence in Western Cape Province post-2008. In an area where nearly 60 percent of residents are unemployed, according to census data, Ward Counsellor Thobile Gqola, estimated that foreign nationals run more than half of businesses.

“Generally, people are happy to live side-by-side; the problem starts when it comes to business,” he told IRIN.

Most of the violence has been directed at Somali refugees who run many of the small grocery stores known as ‘spaza’ shops in the township. Like many other Somali traders in Philippi, Abdullahi Wehliye, 28, opened a shop there after losing his shop in neighbouring Khayelitsha Township during the 2008 xenophobic violence.

“I lost everything; I had to start over,” he told IRIN as he served customers through a metal grill, a security precaution that has done little to protect him from crime.

Wehliye said his shop had been robbed seven times since it opened in 2010. During one incident in 2012, his brother was shot and killed. Although he reported all of the robberies, no arrests have been made. Of 60 Somali shopkeepers in the area, who have formed an association that Wehliye chairs, all have had their shops robbed and the vast majority have experienced shootings, Wehliye said.

A 2012 study by Vanya Gastrow and Roni Amit, of the African Centre for Migration and Society at Witwatersrand University in Johannesburg, found that Somali-run shops suffered disproportionately from crime, including attacks orchestrated by competing South African traders. Their vulnerability to such attacks was found to be partly the result of their lack of access to informal justice mechanisms and community structures.

In township settings, noted the researchers, leaders of local street committees, most of which fall under the authority of the South African National Civic Association (SANCO), often play a more important role in responding to crime than the formal justice system.

ARESTA partnered with the International Organization for Migration (IOM) to start a project in Philippi in 2012 that identified 20 community leaders in each of the townships’ five wards and trained them to be “peace monitors”. The three-day training included mediation and conflict-resolution skills as well as information about the rights of migrants and refugees.

“There’s a lot of conflict here,” said Vra Mdledle, a SANCO member and secretary to a ward counsellor who went through the training last year. “When you’re in SANCO, they don’t give you training, they just nominate you. ARESTA gave us skills we could use in our communities.”

She gave the example of a Somali shopkeeper in her area who had recently experienced an arson attack. Following a similar attack last year, he alleged that local police had pressured him to drop the case.

“I called all the peace monitors, and we decided to accompany him to the police station,” said Mdledle. “We asked to see the station commissioner and demanded that the previous case be reopened. I saw the police are not really doing their job.”

Although the focus of the project is to promote diversity and quell xenophobic tensions, the peace monitors do not limit themselves to advocating for foreign nationals. Locals also suffer as a result of police negligence, said Mdledle, and there are many situations that demand conflict-resolution skills in this densely populated township.

Voyiseka Nzuzo, 24, who went through the ARESTA training in February, said peace monitors in her area had recently intervened after the family of a nine-year-old rape victim beat and stabbed a man they believed to be the perpetrator. “We found that the child had pointed out five different people. We went to the police station and tried to convince the case investigator they had the wrong suspect,” she told IRIN. 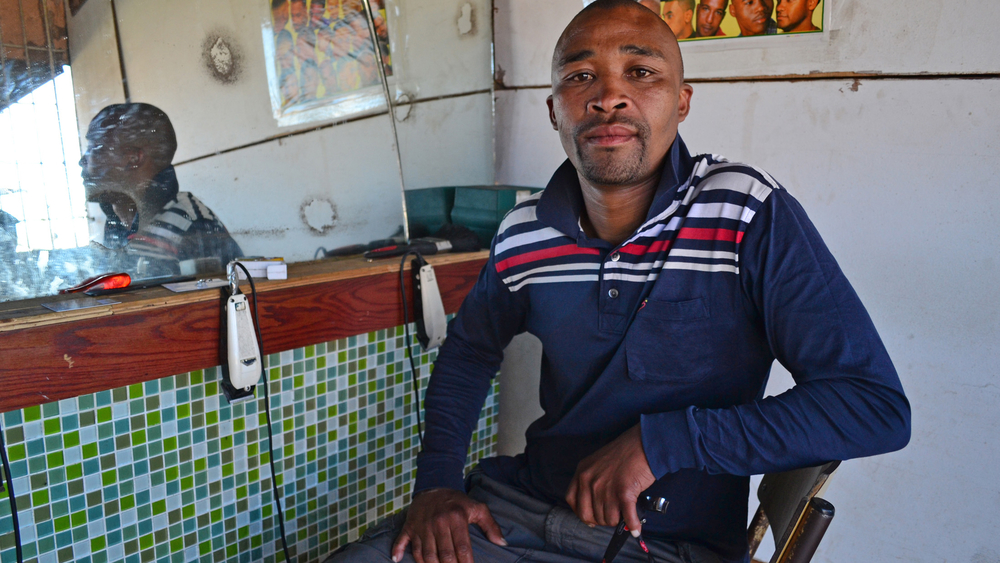 As the owner of a barber shop with foreign customers and the founder of a local business association that includes South Africans and migrants, Lefefe Mdunyelwa said he already had friends from other countries before he became a peace monitor, but that he still learned a lot from the training. “I learned that each and every person is just living for themselves; nobody’s trying to steal your business,” he told IRIN.

Noticing that the foreign members of his association were often discriminated against when it came to the issuing of business permits and the charging of rent by municipal officials, he said his association is now advocating for equal treatment.

Although ARESTA has made efforts to include members of Philippi’s Somali community in the peace monitor training and quarterly peace marches, Mutabazi said participation had been disappointing.

Wehliye, who is one of eight Somalis to have gone through the training, said language remained a barrier, and Gqola, the ward councillor, said foreign nationals often stayed away from meetings aimed at facilitating dialogue between local and foreign business owners because they felt intimidated.

Wehliye said he signed up for the training because “after we’d been robbed so many times, I wanted to know what rights I had. I learned I had the same rights [to justice] as local people. I feel empowered.”

Becoming a peace monitor has also brought him into contact with local leaders whom he works with to resolve conflicts. “I now feel like a member of the community,” he told IRIN.

Mutabazi said the success of the peace monitor project lay in its emphasis on changing the mindset of influential community leaders. Whether it will be rolled out in other townships will depend on funding, but Mutabazi is convinced that the value of the training has been tested.

“It’s empowering [participants] to be better community leaders. If we’re leaving that kind of legacy behind, it’s very good for promoting social cohesion.”