The time lost put one family in a horrific predicament. With only a single motorbike, the parents could not transport their family of six in a single trip so it was decided to remain at home so that the whole family would live or die together. They and some 350 others perished.

The brother of the mother of that family, Margoutomo, who like many Indonesians goes by only one name, said that after the 2010 tragedy, Merapi residents came to acknowledge they had lived alongside the 2,914m volcano for so long that they had become dangerously inured to its threat.

However, more than two years on, residents say they are much more aware of the danger and better prepared.

“Before 2010, if there was lots of smoke from the volcano or even rocks rolling down it, we didn’t pay much attention,” said Suwarni, a woman in her thirties who runs a gift shop for tourists on the mountain. “Now, even if there is a small sign of some activity from the volcano, people react quickly.”

“Now there is much better coordination and we’re always disseminating information about the weather,” said Triyanto, 30, a tour guide and community emergency response volunteer.

One simple but effective change is the introduction of hand-held radios, commonly seen on the belts of residents and set to the same frequency allowing for constant updates and interchanges about conditions on the mountain.

A three-tier warning system was also established in 2011 whereby government monitoring centres regularly inform appointed community representatives of the threat level so they can disseminate information to people around them. Before the 2010 eruption, such warnings were slower to spread and sometimes were contradictory because they came from various sources.

Road and bridge infrastructure leading off the mountain was also improved to make evacuation more efficient, said Aris Marfai with the Faculty of Geography at Gadjah Mada University in Yogyakarta, while government and non-governmental groups have conducted a number of training sessions in communities, so evacuations are less improvised.

There are no longer houses on the upper reaches of Merapi but some former residents continue to work there, providing services for tourists. The area was badly affected by the eruption of Mount Merapi in late 2010 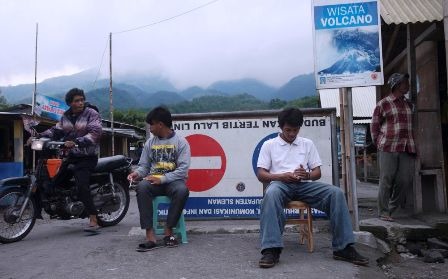 However, probably the biggest preparedness step of all has been moving people off of the mountain’s upper reaches.

Two thousand five hundred families have moved to government-built houses in relocation sites and the authorities want to relocate another 668 families, according to Subandrio, head of the Yogyakarta office of the Research and Technology Development Agency for Volcanology, a government agency that monitors volcanoes.

But hundreds of families are still refusing to go. Their reluctance stems from a desire to remain in familiar territory and from skepticism about their vulnerability if their particular corridor of the mountain was not directly affected in 2010, said Subandrio.

It was this mistaken belief that Merapi’s eruptions follow a predictable pattern that caused many residents to delay their escape in 2010 and die as a result, he added.

Initially, most residents resisted government orders to relocate: Residents were accustomed to living and farming on large plots with fertile soil, and local culture emphasizes attachment to ancestral land.

But, with the offer of a relocation house and little or no capital to rebuild their previous homes, most people came to accept the deal.

Of the relocated families, 81 now live in Karang Kendal, several kilometres further down the mountain from their previous village. The government constructed a new community there, with homes and paved roads.

The transition to such sites has not been seamless and there is a prevailing sense of aimlessness among older residents who are not accustomed to the confines of the new community, which has no fields or even private yards.

Many farmers who lost their crops and livestock in 2010 have yet to find new work. They still own their former plots higher up on Merapi but they say they lack the capital to start over. Limited education levels limit their prospects of getting non-agricultural work.

Budiutomo, 55, has been in his new home for six months but remains idle. He used to be a dairy farmer but he has yet to sort out what he will do. “There was more work to do there. Here, it’s difficult to know how to find regular work,” he says. Two male neighbours, also unemployed, nod in agreement.

“It’s painful to leave our former homes,” chimes in Andri Joko Supatra, 27. “But the good thing is that we are further from the danger.”