Historically, as countries have industrialized, the number of small farms has dwindled, with workers opting for city life. But the Philippines government is concerned that this trend could exacerbate food insecurity in an import-dependent country already struggling to meet current food demand.

“The average age of the Filipino farmer is 57. Assuming an average life span of 70, we might reach a critical [shortage] of farmers in just 15 years,” said Asterio Saliot, director of the Department of Agriculture - Agricultural Training Institute (DA-ATI).

“The average level of education of a farmer is grade five only,” he added.

According to Saliot, farmers’ age and limited education make them less receptive to new farming technologies that can boost yields in the face of growing losses from volatile weather.

Weak government policies and programmes, an excessive reliance on agricultural imports, and corruption, have taken their toll on the agricultural sector, say experts.

According to the 2012 Bureau of Agricultural Statistics, the agricultural sector employs an estimated 12 million people, making up 33 percent of the country’s labour force. About 70 percent of the rural poor are farmers and fishermen.

Though the sector contributes about 11 percent to the country’s GDP with US$14.7 billion, 2011 government investment in the sector was only 4 percent of the national budget.

That year total government spending on agriculture was $1.6 billion, almost 24 percent lower than the previous year.

“We didn’t pay enough attention to the agricultural sector because we thought that we could always import our food if we couldn’t grow it ourselves,” said Kala Pulido-Constantino, advocacy campaigns and communications coordinator with Oxfam in the Philippines.

In 2010, the Philippines imported 2.45 million tons of rice, making it the biggest rice importing country worldwide that year.

Compounding the problem is the country’s population, which is growing at about 2 percent per year and is projected to reach 120 million by 2025.

“We cannot meet local demand as it is,” Francis Pangilinan, a senator and chairman of the Congressional Committee on Agricultural and Fisheries Modernization (COCAFM), told IRIN. Boosting imports is not a reliable option, he added. “The world food crisis of 2008 taught us that while we may have the money to import rice, rice-exporting countries may not be willing to sell the rice to us.”

“Being a farmer is like being a priest; you take a vow of poverty and make a pact with the lord that no typhoon will come and destroy your crops."

The average daily wage of a farmer is $6, versus the national average of $10.

But a major typhoon can easily wipe out earnings, small-scale farmers have learned. The archipelago, ranked as one of the most disaster prone countries in the world, experiences an average of 20 typhoons annually.

“Being a farmer is like being a priest; you take a vow of poverty and make a pact with the lord that no typhoon will come and destroy your crops,” said Pangilinan.

A 2009 survey by the Canada-based International Development Research Centre (IDRC) showed that all regions in the Philippines are vulnerable to extreme weather events, some of which are linked to climate change.

The Global Climate Risk Index (CRI) of German Watch ranked the Philippines among the countries that experienced the greatest loss from weather disturbances in 2011.

In the past two years tropical storms have battered the southern island of Mindanao, a region largely untouched by natural disasters in recent decades.

Last December, the eastern coast of the southern island of Mindanao, where 80 percent of the population relies on subsistence farming, was hit by the Category 5 (winds of at least 250km per hour) Typhoon Bopha, which caused an estimated $663 million worth of damage to agriculture.

“I lost my home, my crops - everything,” said Armando Banudan, 48, a farmer from the coastal Davao Oriental Province who used to plant coconuts on a small patch of land that he also called home.

“It takes 8-10 years for my coconuts to grow. What will happen to us in the meantime?” Banudan asked.

The International Fund for Agricultural Development counts residents of the archipelago’s mountainous regions and the island of Mindanao among the country’s poorest.

Farmer Armando Banudan lost his home, his crops and everything during Typhoon Pablo last December 2012 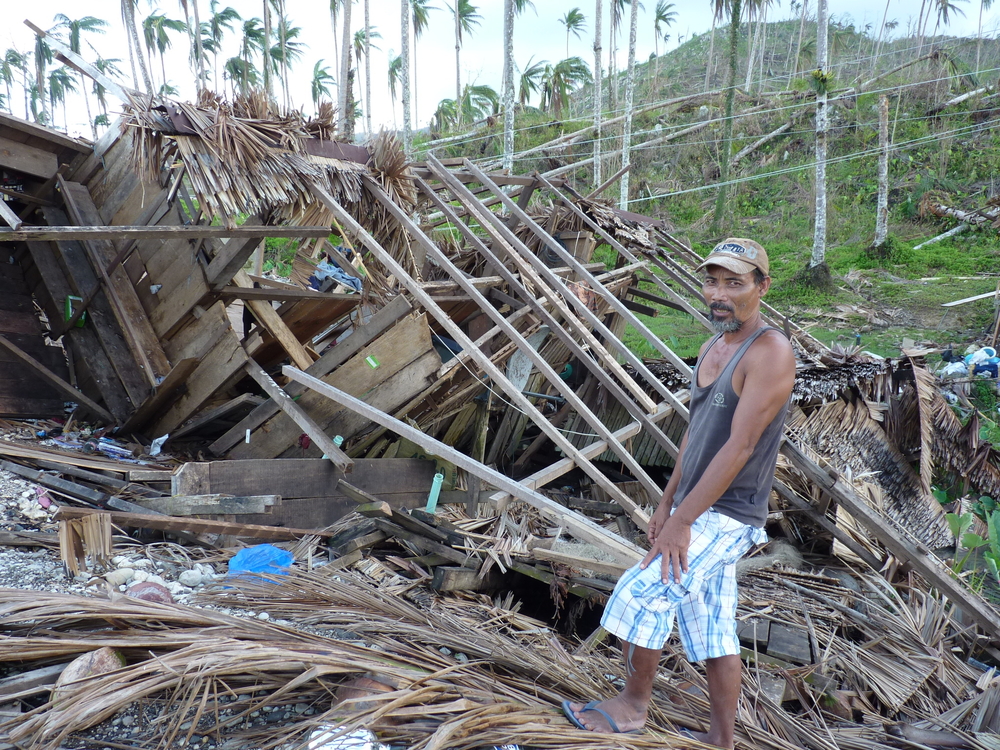 Compounding the problem is a younger generation that is, largely, leaving rural areas nationwide, depleting the pool of potential agricultural workers.

“The problem with farming is that it is associated with poverty. So no farmer would want their children to become farmers,” said Jocelyn Alma Badiola, executive director of COCAFM.

Most rural families instead want their children to pursue more lucrative jobs in commercial centres near Manila.

“It is too late to do something about our current farmers. We must now change the mind-set of the younger generation and make farming appealing for them,” said Jose Rene Gayo, president of local NGO Foundation for People Development.

The foundation is working with the government to offer scholarship programmes that combine classroom lectures and field training in farming to young people with the right skills and motivation who have dropped out of school.