Mozambique has dealt with years of recurrent floods and set up an effective early warning system, yet the intensity of this year’s rains came as a surprise.

At least a 100 people have been killed and 150,000 displaced in the country’s southern Gaza Province, with the Chókwè District among the worst affected by flooding of the Limpopo River.

The numbers of people killed and displaced have dropped since 2000, when floods in Mozambique killed 700 people and displaced a quarter of a million others, but they are higher than the tolls from 2008’s floods.

Aid workers and officials in Mozambique are now discussing problems in the early warning system, and they are looking to long-term solutions, including reviving a long-standing debate on dams, to save people from future floodwaters.

Although 2008 saw floodwaters along the Zambezi River Valley reach levels higher than in past flood years, increased planning, early warning and the rapid response capacity of the National Institute for Disaster Management (INGC) ensured a better-coordinated response and lower casualties, according to the UN in Mozambique.

But these measures proved less effective against this year’s torrential rains.

Américo Ubisse, the general secretary of the Mozambican Red Cross, has already started thinking about lessons learned. “The early warning system worked well this time. People already understand the meaning of blue, orange and red alert [colours signifying levels of risk]. But still the problem is that we were taken by surprise by the magnitude of the rains. The forecast talked about between 75 and 150mm of rain [over two days in the south]. But in the end [we received] 400mm. Suddenly, the water was already in the city and many people were affected at the same time.”

Sergio Buque at the National Meteorological Institute in Maputo says it is difficult to forecast rain quantities over 75mm using the equipment they have.

“Our radars are not functioning,” he said. Weather radar helps locate precipitation and calculate its motion, type and intensity. “[It] helps to better predict rainfall within the coming 12 hours. But we are doing our best with the equipment available.”

Buque hopes the radar system will be renovated in the coming years; such a renovation is listed in the government’s plans.

Forecasting water levels in the Limpopo River is also crucial for the early warning system. Last year, a report of the World Meteorological Institute said information on available water resource and flood monitoring systems was inadequate. The report also noted that communication and technical cooperation between Mozambique’s national weather services and national hydrological services are limited, which prevents the sharing of hydro-meteorological data for real-time flood forecasting and warning.

Mozambicans are also discussing whether it is possible to avoid recurrent floods altogether. Dykes could protect the city of Chókwè, for example, but the dykes that existed were partially destroyed by floods in 2000 and have not been restored.

"The government has been occupied with the forming of a mitigation unit, and they have done a good job with that. The problem is that they have used a lot of energy dealing with the effects of floods, but the long-term prevention has been put aside"

Most of Mozambique’s major rivers flow from neighbouring countries into Mozambique before emptying into the Indian Ocean. Mozambique depends on its neighbours to deal with water levels in the dams on their sides of the border. But when there are heavy rains, they are forced to release water from their dams; the water then flows downstream into Mozambique.

Some believe a dam is the solution for the Chókwè area, but others believe a cheaper and more sensitive option is to move people out of high-risk areas. Resettlement is also being discussed in Maputo, where uncontrolled urbanisation is blamed for the displacement of thousands of people during floods.

Opponents of dam construction often invoke the Cahora Bassa Dam on the Zambezi River, which was constructed by the Portuguese in the 1970s and is widely viewed as an environmental catastrophe. Cahora Bassa displaced tens of thousands of people and severely degraded downstream floodplains and fisheries. It permanently altered the natural pattern of flooding, on which the local population relied for food cultivation, and has been blamed for decimating crustacean stocks along the coast.

But the administrator of Chókwè, Alberto Libombo, believes a dam in Mapai, in the district of Chicualacuala, could help prevent flooding as it would make water-level regulation possible on the Mozambican side of the Limpopo river.

”I don´t know if the government plans to build a dam, but I hope it will be included in the next five-year plan. It will, of course, cost a lot of money, and we will need to find partners to help us with the financing, but that´s the only solution.”

Mozambique’s President Armando Guebuza said in a speech on 3 February that resources must be mobilized for new infrastructure to mitigate the effects of floods. He gave as an example the dam in Mapai. Yet a 2010 study by an initiative of the Consultative Group on International Agricultural Research concluded that a dam in Mapai would not prevent flooding.

Experts have cautioned authorities about relying on dams, which could actually pose risks to the population because it is difficult to construct dams able to withstand extreme weather conditions. Daniel Ribeiro, a dam expert with the NGO Environmental Justice, in Maputo, says dams can normally protect populations from small floods but not big ones. And when dams are built, settlement patterns change; people, feeling safer from floods, move closer to dangerous areas, making them more vulnerable when dams fail.

Ubisse of the Red Cross believes in another approach: The village of Chiaquelane in Chókwè, where approximately 70,000 people have gathered in a camp since the recent floods, was created after severe floods in 1977-1978. During that time, the government provided the affected population with plots and fields to entice them to stay in elevated areas.

”We should encourage people in this area to have two houses,” said Ubisse - a permanent house in the high areas where their children can go to school, and a temporary house to live in while working on their fields. “There is enough land in the high areas to do this.” 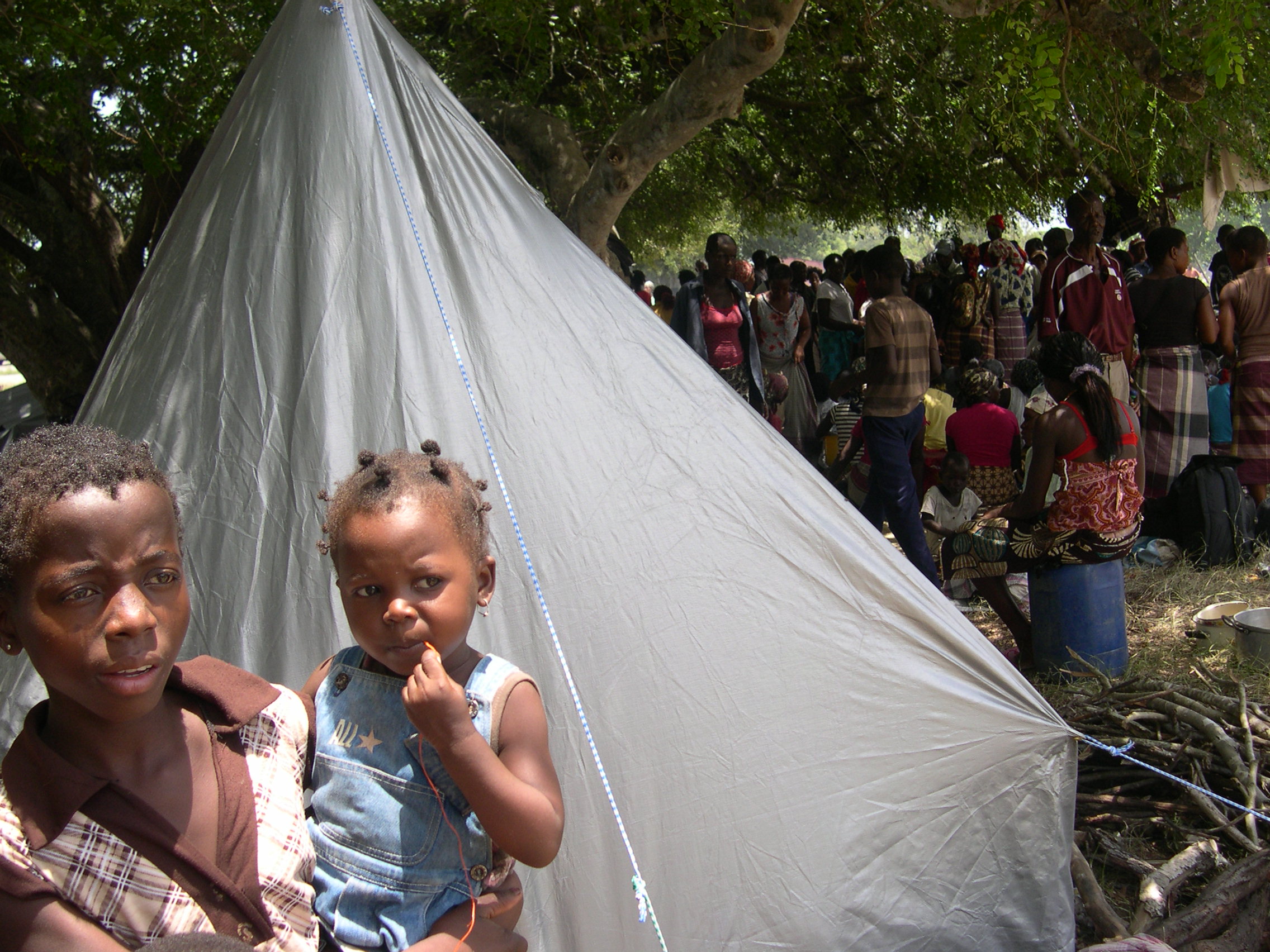 Ribeiro is uncertain if enough land is available for this plan, and he believes that resettlement would have been easier in the past. Still, he says, a long-term plan is needed. “The government has been occupied with the forming of a mitigation unit, and they have done a good job with that. The problem is that they have used a lot of energy dealing with the effects of floods, but the long-term prevention has been put aside.”

The government has already begun to move ahead with its resettlement plans. Rita Almeida, spokesperson for INGC, told IRIN the government’s goal is to identify and give away 4,830 plots, the majority of them on the higher ground of Chiaquelane. This is both a short- and a long-term solution, she said.

“There are too many people living under precarious conditions in the camp in Chiaquelane, and the risk is that diseases will start spreading. This is a way to ease the pressure on the camp, but we also want the people to move permanently to their new plots.”

When IRIN visited Chiaquelane, the majority of interviewees wanted to return to their homes. When asked if people really want to stay in Chiaquelane, Almeida said, “The ones that have received plots until now have accepted them, but we need to work with the population concerning this aspect.”

Ribeiro advocates consulting with the affected communities first. He says that if the government goes through a fair, transparent process first and still identifies the need for a dam, he would accept that rather than have a decision imposed on the people.