I will support your work.
COLOMBO

Thousands of northern Sri Lankans are unable to return to their homes as the land they are on is still occupied by the army, say residents and activists, though military sources reject the allegations.

“I would like to go home, but I can’t. Our homes and land are occupied by the military,” Sivaguru Angaramuttu Udayakumari, a 43-year-old mother-of-two told IRIN. Her home in Seeniyamottai, a village in the northern district of Mullaitivu, lies deep inside a former high security zone (HSZ).

“We lost our livelihoods and now live either with host families or in government resettlement villages,” said Manoharan Suriyakumari, 41, another resident.

After the end of hostilities between government forces and the Liberation Tigers of Tamil Eelam (LTTE) on 18 May 2009, the government announced it would “release” areas in the HSZs, often comprising whole villages, in 2010 to facilitate the resettlement of more than 400,000 displaced people.

While progress has been made in certain areas, large tracts of land remain occupied, activists say.

Compounding the problem is the government’s sensitivity on the issue and the lack of reliable data as to how much land is still being held, said another.

According to government officials, more than 26,000 people are still unable to return to their homes in military-restricted areas (primarily Mullikulam, Mannar, Jaffna, Sampoor, Mullaitivu and Kilinochchi).

Most HSZs were set up in the 1990s to prevent attacks on strategic areas and reduce the threat of LTTE artillery fire on Sri Lankan army installations. Tens of thousands living in declared HSZs were ordered out, leaving behind their homes and property.

Jaffna District at the extreme northern tip of the island, one of the most militarized areas of the country, is particularly affected, with large tracts of land still off limits to civilians.

Prior to 1990, more than 80,000 people lived in Valikamam North Divisional Secretariat Division (DSD), one of 15 DSDs that comprise the district, which includes both the airport and Jaffna harbour.

A war-damaged home in northern Sri Lanka. At least 160,000 houses need to be repaired or reconstructed in the Vanni 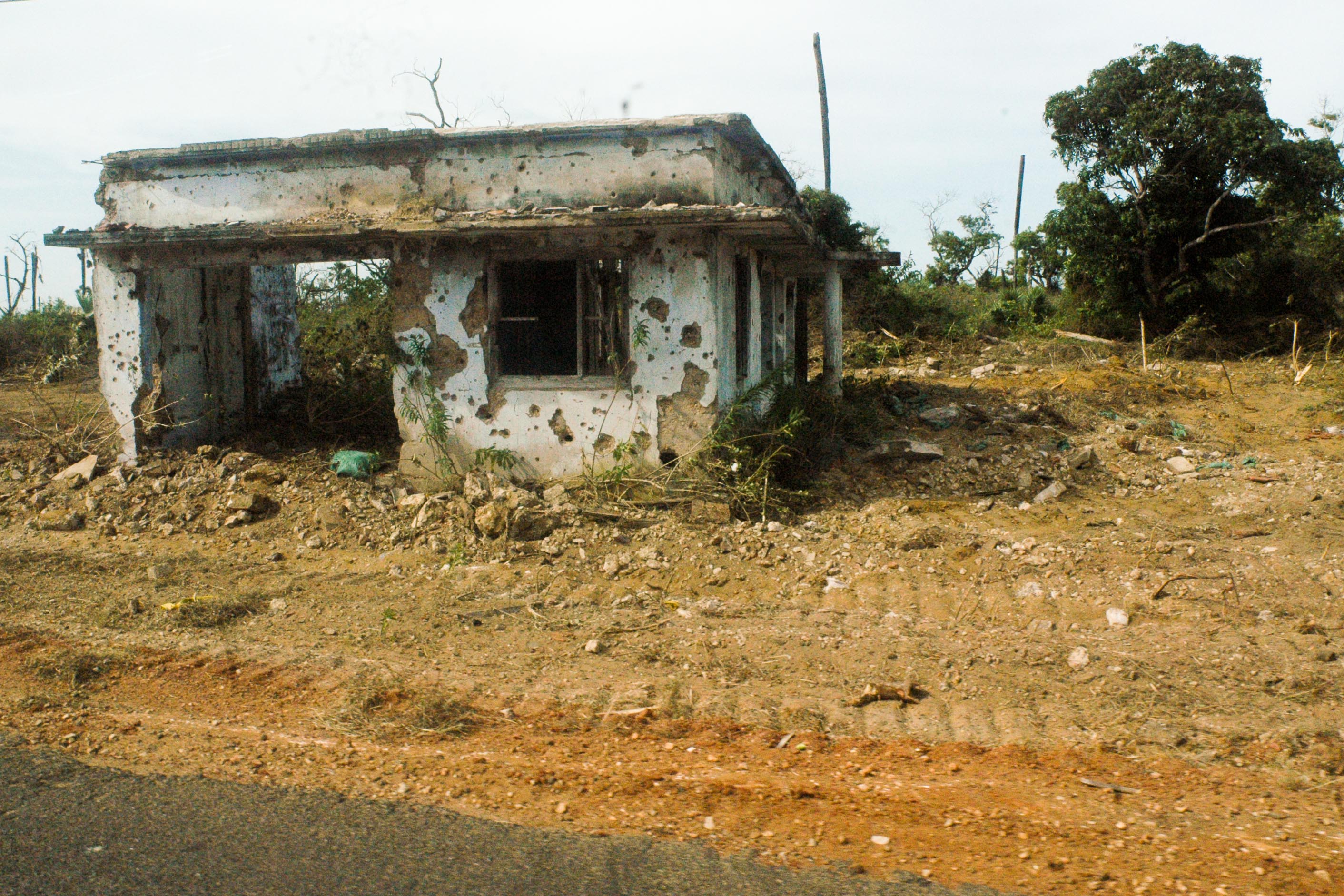 Today there are some 23,000 individuals registered for resettlement in the 58.6sqkm area, most staying with host families. At the same time, thousands of homes - many of them close to the Palali military airport - stand abandoned, overgrown with vegetation and jungle - a potent reminder of an as yet unresolved issue.

Sri Lankan activists describe the government’s failure to hand over thousands of hectares of land to their original owners - most of whom possess valid deeds - as an impediment to peace.

“Though the war is over and HSZs have officially been abolished, certain areas are still under military occupation,” said human rights lawyer M A Sumanthiran. “Holding these lands is illegal in the absence of a legally declared HSZ and the absence of war.”

“This is not just a barrier to peace and reconciliation, but a serious infringement of a citizen’s rights,” said activist Saroor.

The Sri Lankan military denies they are still holding land - and even that there are any HSZs.

“With the repealing of emergency regulations [August 2011], HSZs became a thing of the past. There are only military cantonments. Lands have been returned to the owners through government agents in four districts,” Military Spokesperson, Brig Ruwan Wanigasooriya, told IRIN.

Any delays were due to demining activities and loss of documentation, he said.

“It [the issue] is not as big as it is made out to be. The lands occupied by the military during the war have been released. Lands are being legally acquired to develop Palali and Kankesanthurai as an international airport and a harbour.”

LLRC recommended that all families who had lost land and or houses due to formal HSZs or to other informal or ad hoc security-related needs, be provided alternative land or compensation within a specific time frame in compliance with the UN Guiding Principles on Displacement and the Restitution of Land of the Displaced - something activists say has not yet happened.