When Sonny Johnson left Tripoli for the Italian island Lampedusa in a wooden fishing boat, he feared he might never set foot on dry land again. But for Johnson, from a small village in eastern Sierra Leone, it was worth the risk.

"I had been working in Tripoli for four years, after travelling there overland from Freetown [Sierra Leone capital]," he told IRIN shortly after arriving on the island. "I had a well-paid job, but when the situation broke down in Libya, I started to suffer abuse because I was African. I started to get tired in my soul. Then I knew I had to leave, and I decided to try to come by boat.

"On the boat, nobody talked about where we were going," he said. "I don't think anyone wanted to jinx our arrival. We talked about other things, like family and football. All we knew was that we were going to Italy."

Johnson left on a boat with 110 other migrants, among them several women and children, at 4am on 11 June. After being tracked by Lampedusa's coastguards, the boat was escorted into port at midday the following day. "The sea was a little bit rough," he said. "But I believed we would arrive."

Johnson paid US$800. The boat captains are usually also migrants who have paid a slightly reduced rate to agents who ask them to operate the boats. Often they have limited experience at sea and are treated like the other migrants. The boats are often impounded and a "boat graveyard" is appearing by the port.

There is also a small museum on Lampedusa where local artists have turned belongings that were previously owned by migrants - shoes, korans, photos, letters, fuel containers, life jackets - into an art collection.

Lampedusa's sandy shores have been a landing point for migrants from North Africa for centuries. But the island was overwhelmed by a surge of more than 30,000 migrants between February and April this year. Aid workers based on the island say the situation, although difficult, has since improved.

"Lampedusa's two processing centres are crowded but the situation is not critical," said Barbara Molinario, spokesperson for the UN Refugee Agency (UNHCR) in Lampedusa. "But logistically it is difficult when we receive large influxes."

In the 10 days prior to 12 June, Lampedusa had received no boats from North Africa, but on 12 June UNHCR registered 1,500 migrants in seven boats during a 12-hour period.

As each boat arrived at the port, anxious smiles were clearly visible on the faces of the migrants. Some dropped to their knees and prayed on the edge of the dock. "There is a kind of euphoria," said Johnson. "We cannot believe we have arrived."

But arriving on Lampedusa is only the first step in a registration process that can take up to one month. Of this week's 1,500 new arrivals, 1,000 departed on 12 June after undergoing registration by Italian immigration officials and police.

"The two processing centres on Lampedusa are quite small and people need to be identified by police in a short period of time," said Molinario. "For the migrants, that usually means long waiting hours. It can be quite harsh for them when they have to wait for an entire day to shower and change their clothes, after coming by sea all the way from Libya."

Migrants are first processed by Italian police at Lampedusa's two centres and are given hot meals, access to showers and beds. A designated ferry then transports migrants from Lampedusa to Sicily several times a week. Next, they are allocated to holding centres in places such as Mineo, Naples or Bari, where it takes 7-30 days to receive a six-month visa.

Italian police on Lampedusa told IRIN that migrants are issued with new shoes and clothes before they leave the holding centres. According to personal choice, they are separated into groups and driven to Italian towns and cities. After six months, if they have not left the country, been sponsored for work or applied for refugee status, they become illegal immigrants.

A small number of Libyans are also among those travelling to Lampedusa. Thirty-six-year-old Babacar told IRIN he left Tripoli after being treated badly because he is of African descent.

"I hid my identity card inside my shoe in case Libyan authorities stopped me from leaving," he said. "They are happy for the African workers to leave. But I was afraid they would ask for my documents, find out I was Libyan and send me back. Or something worse," he said.

Aid workers say the number of Tunisian migrants has decreased dramatically in recent months, largely due to an Italian government policy which now states that Tunisian migrants should, in most cases, be repatriated rather than processed on temporary visas. According to Italian police on Lampedusa, those who do arrive from Tunisia are usually sent back by chartered plane from Lampedusa airport.

Molinario said most of the boats that arrive are now coming from Libya, carrying migrant workers mostly from African countries trapped in Tripoli and other western cities.

According to Ennio Ciuffi, Lampedusa spokesman for the Italian Red Cross, the humanitarian situation on Lampedusa has improved since April. "Then, the whole island was full of migrants looking for food and a place to sleep. With 7,000 migrants here it was very difficult to organize everyone," he said. 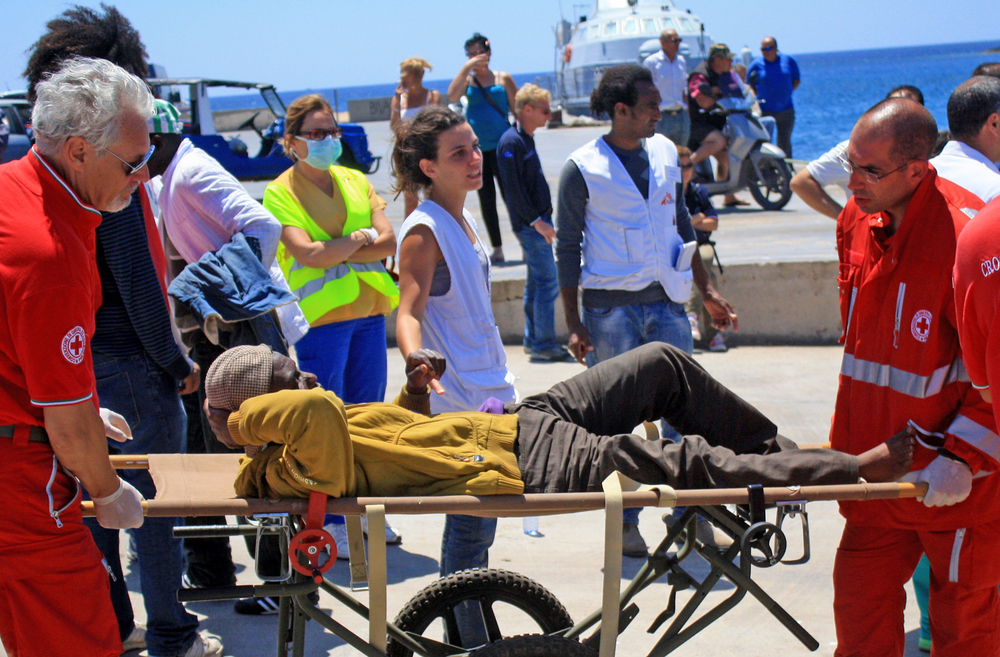 Kate Thomas/IRIN
Paramedics from the Italian Red Cross treat an injured migrant worker at Lampedusa's port
Among the Red Cross's 22-strong team of medical staff is Ivo Crosato, a doctor. Most cases he treats at the port are not serious. "Generally I see one or two patients from each boatload of new arrivals," he said. "The most common problems are dehydration, hypothermia, sunstroke, seasickness and fainting, which are usually straightforward to treat. More serious cases are referred to Lampedusa Hospital or to Sicily by helicopter transfer."

The journey has its risks. In April, 213 migrants travelling from Libya drowned off the coast of Lampedusa when their boat stalled without fuel and later capsized in rough seas. Some 47 passengers, including a pregnant woman, were rescued from the water and brought to Lampedusa by the island's search and rescue team.

On 8 May, a boat carrying migrants crashed onto rocks on Lampedusa. The Italian Red Cross, which has set up a temporary hospital at the island's main port, was able to pull some people from the sea. Three passengers were crushed to death between the underside of the boat and the rocks. They are buried in the island's main cemetery.

Ciuffi said the captains of boats carrying migrants are now only travelling in exceptionally calm waters. Numbers, he said, swell on days when the sea is calm. When there is a strong cross-wind there are usually no boats at all.

"People are paying more attention to the weather and sea forecast before travelling," he said. "They usually leave in the early hours and take about 16 hours to arrive, and their coordinates are relayed to us by the police and coastguards, so we have time to prepare for possible medical emergencies."