Until devastating floods hit southern Somalia in November, the road from the port city of Kismayo to Jamame, 60 km to the northwest, was just a motorway connecting two regions.

Today, sections of the road - which is still in good condition despite years without maintenance - are dotted with wooden structures, especially in the Lower Juba region.

The shelters sprang up in November after thousands of people displaced by the worst floods in Somalia in 10 years sought higher ground to pitch camp. The road's elevation provided the only ground that was not inundated with flood water. The displaced also use the road to dry cereals, mostly a corn-soya blend distributed by aid agencies.

The water, however, is never far away. At Arare, one of the camps 12 km from Jamame, a few steps from the shelters is the flood water - which the internally displaced persons (IDPs) use for everything - drinking, cooking and even waste disposal.

According to United Nations agencies involved in providing relief aid, up to 454,500 people are estimated to have been displaced countrywide, particularly in the Juba and Shabelle riverine regions, after heavy rains in September-November in Somalia and in neighbouring Ethiopia caused extensive destruction of property and loss of crops and livestock.

Humanitarian officials told journalists in Jamame on Friday that up to 100,000 hectares had been flooded across the country since the onset of the heavy rains. The media trip was organised by the UN Office for the Coordination of Humanitarian Affairs (OCHA-Somalia) and the UN Children's Fund (UNICEF-Somalia) to focus attention on thousands of Somalis affected by the floods.

Although humanitarian agencies have provided chlorine and water-treatment tablets, lack of proper sanitation and the threat of water-borne disease outbreaks remain the major concerns, according to Abdi Awadh, the field emergency supervisor in the region for the United Nations World Health Organization (WHO).

Health workers say the presence of water all round has created serious problems. "We have noticed an increase in cases of watery diarrhoea and malaria, mostly in children and the elderly," Awadh said on Friday. "Malaria is rampant but we have enough medical supplies to deal with it."

Subsistence farming and pastoralism are the mainstay in Somalia, a country whose child and maternal mortality rates are among the highest in the world. One in four children dies before reaching the age of five and 1,600 women die for every 100,000 live births.

For the displaced in Arare, the floods have totally disrupted their lives - submerging their homes and washing away most of their property.

"I only managed to salvage some kitchen utensils," Waktia Mahado, a mother of 11, said at Arare. "Right now my biggest concern is lack of bedding for my family."

Yet agencies warn that the rains may continue until next month. "Due to a prevailing El Niño, Deyr [short] rains may continue into 2007, with their impact being felt most acutely in the lower reaches of the two rivers [Juba and Shabelle], particularly the Juba," according to a report by OCHA in early December. "In a worst-case scenario, as many as 900,000 Somalis could become displaced in flooding continues through December."

According to OCHA and other UN agencies, the floods have exacerbated an already dire humanitarian situation and any delay in the mobilisation of assistance puts the lives of those affected at extra risk.

In addition, Somalia is facing an increased risk of conflict. Any fighting resulting from the deterioration in the present political stand-off between the transitional government and the Union of Islamic Courts would be disastrous, resulting in massive internal displacement, civilian casualties and further livelihood and asset erosion.

Humanitarian workers in Jamame say although the floods are subsiding, up to 12 villages out of 83 in Jamame remain flooded, two of them completely destroyed.

[Somalia] Women collect water from the Juba River, southern Somalia, 15 December 2006. United Nations agencies involved in providing relief aid to the flood-affected people estimate that up to 454,500 people have been displaced in the Juba and Shabelle re 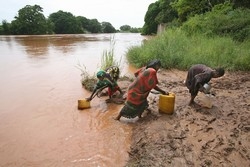 The destruction in Jamame, an area controlled by the Union of Islamic Courts (UIC), is not only caused by the floods. Years of conflict have meant a collapse in the region's infrastructure; there are no health facilities and the education system is virtually non-existent.

The UIC assistant commissioner in charge of Jamame, Sheikh Ibrahim Abdullahi Hassan, said since the UIC took control of the area two months ago it had been trying to restore the infrastructure.

"Providing security is our main priority because we want to make it safe for the people to go about their business," Abdullahi said. "With increased security, we now have a school run by UNICEF operating in Jamame, in addition to an Islamic elementary school.

"As you can see, Jamame has been abandoned since 1991 [following the ousting of the late president Siyad Barre]; the infrastructure is destroyed, so many people have been displaced by fighting, every road is flooded, making access possible mostly by boat," he said. "It is difficult but we are trying to mobilise people through the mosques and the radio by telling them that we are providing security."

Thanks to UN agencies and humanitarian NGOs pre-positioning relief aid in the region, which was previously affected by drought, the distribution of aid to the displaced is efficient.

For instance, in Arare, two medical teams of the NGO Muslim Aid-UK, each comprising eight members, has been in operation since the IDP camp was established, Awadh said. The teams have provided medical care and immunised against diseases such as polio and measles.

"Since Arare was set up, humanitarian agencies have conducted two major aid distributions - within 20 days of setting up the camp," Awadh said.

On 14 December, the UN launched a US $237 million humanitarian appeal for Somalia for 2007 to alleviate the suffering of 1.8 million people, with the UN humanitarian coordinator for the country, Eric Laroche, saying the humanitarian needs in Somalia remained critical.

"The work and efforts of humanitarian organisations play a vital role in providing life-saving activities," he said during the launch in the Kenyan capital, Nairobi. "A generous response from the international donor community will ensure an integrated approach by humanitarian organisations in meeting needs as well as strengthening the capacity of Somalia's most vulnerable communities."