This story was co-reported by a journalist in Addis Ababa whose name is being withheld for security reasons.

Listen to this article:
ADDIS ABABA/LONDON

Ethiopians head to the polls today in federal and regional elections, but voting will not take place in several conflict-affected areas and the outcome could aggravate divisions in the country, where millions are displaced amid a worsening humanitarian crisis.

The insecurity – in addition to a range of logistical, legal, and administrative problems – means ballots won’t be cast in around a fifth of the country’s constituencies, while the arrest of opposition leaders has eroded the credibility of the polls, which were originally scheduled for August 2020 but postponed on account of the coronavirus pandemic.

“I don’t see the election helping [Ethiopia] in any form,” said an Addis Ababa-based political analyst who asked to remain anonymous, citing the risk of reprisals for speaking freely to the media. “I see it more likely that it will aggravate the situation.”

Among the areas where voting won’t take place is the northern region of Tigray, where seven months of conflict between the Ethiopian military and rebel forces has displaced almost two million people and left hundreds of thousands on the brink of famine.

Ethiopia’s electoral board has announced cancellations too in Oromia – the country’s largest and most populous region – while a rebel group in the area is threatening to disrupt voting in places where polls are still scheduled. 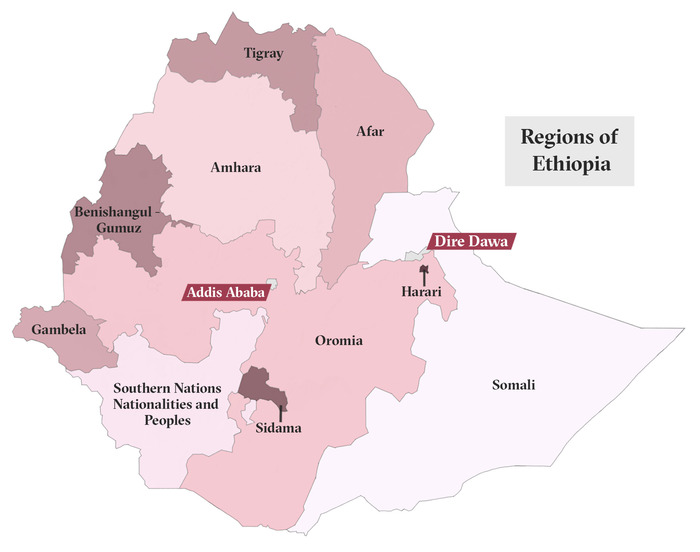 Ballot-printing issues have also led to postponements in the eastern Somali and Harari regions. Voting in both areas is now planned to take place in September, according to the electoral board.

Prime Minister Abiy Ahmed has billed the vote as Ethiopia’s first attempt at free and fair elections, and a crucial part of the country’s democratic transition after decades of authoritarianism. But with a lack of competition in key areas, analysts expect an easy win for the Nobel Peace Prize winner’s ruling Prosperity Party.

With a popular mandate that he has previously lacked, Abiy could take one of two approaches in conflict-wracked Tigray after the elections, said Martin Plaut, a commentator and journalist specialising in the Horn of Africa.

“He could either feel that since he has been strengthened, he can make a fresh assault on the Tigrayans, or he could just decide that it’s time to resolve the issue through negotiations,” Plaut told The New Humanitarian. “We will have to wait and see.”

Here’s a preview of the elections, as well as an update on the humanitarian crisis in Tigray, and the latest from other conflict hotspots around Ethiopia.

What’s significant about the polls?

The elections are the first Abiy has faced since coming to power in 2018, after anti-government protests forced the resignation of his predecessor, Hailemariam Desalegn.

But “what should have been a celebration of democracy will seem irrelevant to many”, according to Plaut. “Many people will be too concerned about staying alive or looking after their families to vote,” he said.

Abiy initially won acclaim for a reform agenda that saw political prisoners freed, exiles return home, and an historic rapprochement with neighbouring Eritrea. But thousands have since been jailed in an authoritarian crackdown that has sullied his reputation.

The decision to delay the polls in 2020 was a trigger for the Tigray conflict – now one of the world’s worst humanitarian crises. The region’s ousted ruling party, the Tigray People’s Liberation Front (TPLF), defied Addis Ababa’s decision, organising – and winning – its own regional elections in September.

Political tensions spiralled into open conflict in November when the TPLF – which had previously dominated a coalition that ruled Ethiopia – was accused of attacking a federal army base. The TPLF says Addis Ababa was the first to move militarily.

Ethiopia’s army soon launched official operations alongside troops from Eritrea – which has a long-standing enmity with the TPLF – and militia forces from the neighbouring region of Amhara, which stakes a claim on western and southern parts of Tigray.

The war’s impact on civilians has been disastrous. Thousands have been killed in massacres blamed on Abiy's coalition; Amhara militia have been accused of ethnically cleansing Tigrayans; and the UN says sexual violence is being used as a weapon of war. Tigrayan militia are also reportedly guilty of civilian massacres.

US travel sanctions targeting Ethiopian officials, critical statements from G7 leaders, and the suspension of EU budget funding have not yet led to a change in mindset in Addis Ababa.

Will anything change in Tigray after the polls?

Some hope the election will create a “pivot point” that sees Abiy shift his stance on Tigray – seeking negotiations and expelling the Eritrean forces accused of numerous atrocities. But Plaut, a long-standing critic of the Eritrean regime, described this as “wishful thinking”.

Reports in recent days suggest renewed clashes are taking place between Ethiopia’s armed forces and the Tigrayan rebels, who are now organised under the banner of the Tigray Defence Forces (TDF).

While the government holds urban centres, the TDF controls large rural areas and appears to receive considerable support from local residents, possibly strengthened due to resentment at widespread abuses.

“The situation can be militarily called a stalemate, with the TDF unable to completely liberate its home area by itself while… the Eritrean-Ethiopian-Amhara forces [are] unable to wipe out Tigrayan resistance,” said the Addis Ababa analyst. “Essentially, it’s a war where each side gains and loses territory regularly.”

More than 90 percent of Tigray’s crop harvest has been looted or destroyed, according to the UN’s food and agriculture organisation, FAO. Planting, timed with the rainy season, is much reduced, and there are fears a whole agricultural season will be lost.

An April report by the World Peace Foundation at Tufts University concluded that Ethiopian and Eritrean forces have “comprehensively dismantled” Tigray’s economy and food system, committing “starvation crimes on [a] large scale”.

High rates of violence against women continue, with more than 500 incidents – some including rape – reported in May, according to a 17 June situation report from the UN’s aid coordination agency, OCHA. Of those, 70 cases involved girls under 18.

Humanitarian workers continue to face constraints, according to the same OCHA report, which cites arbitrary denial of access, intimidation of aid workers, and the looting and confiscation of humanitarian supplies, trucks, and equipment by armed forces.

Where else are the elections fuelling tensions?

Analysts say competition between supporters of the main parties contesting the vote – the Prosperity Party, the Ethiopian Citizens for Social Justice Party, and Balderas Party for True Democracy – could trigger post-election violence, particularly in Addis Ababa.

Unrest is also expected to deepen in Abiy’s home region of Oromia, which contains around 40 million people and accounts for 178 out of the 547 federal parliamentary seats up for grabs.

Voting has been postponed in some areas where the Oromo Liberation Army (OLA) rebel group is active, and the rebels are pushing local residents not to vote in places where polling has been scheduled.

“I expect the OLA to be successful in disrupting the voting process in some rural areas as they already have done in some parts of western Oromia,” said an Ethiopian journalist based in the region who asked for their name not to be used.

Opposition parties, including the Oromo Liberation Front (OLF) and the Oromo Federalist Congress (OFC), are boycotting the vote, citing political repression and the arrest of key Oromo politicians.

“There is a significant minority of people who reject the elections and seem to harbour bitter intentions post-elections,” said Girma Belete, a lawyer and resident of Harar city, the capital of Oromia’s East Hararghe zone.

Belete told The New Humanitarian that residents of the area – considered a stronghold of the OFC and of jailed activist Jawar Mohammed – have been taking down Prosperity Party posters in various locations at night.

Another Oromia resident – from Moyale, a southern part of the region – who also asked to remain anonymous, said the boycott has turned the elections into a non-event.

“I haven’t seen a single poster of the Prosperity Party [or] opposition parties,” said the resident. “The nearest thing to an election campaign [was] two months ago, when there was a one-day drive to encourage voters to take out vote cards.”

Tensions worsened in Oromia after violent unrest – triggered by the June 2020 death of popular Oromo singer Hachalu Hundessa – led to the arrest of local activists including Jawar.

Political repression and heavy-handed military operations against the OLA have alienated many Oromos – in particular youth groups involved in the anti-government protests that put Abiy in power in 2018.

After the elections, there is likely to be a further “gradual decline of rule and law”, according to the Addis Ababa analyst. “Continuing violence and repression from the government side [will breed] an ever-violent response from ethnic Oromo youth.”

What are the other current conflict hotspots?

As well as Tigray and Oromia, security concerns mean voting won’t take place in parts of the western region of Benishangul-Gumuz, where attacks blamed on an ethnic Gumuz militia have displaced more than 100,000 people.

In April, border clashes between the Afar and Somali regions, meanwhile, left at least 100 people dead, according to local officials. And in the North Shewa and Oromo Special Zones of Amhara region, 358,000 people were displaced – also in April – following an outbreak of intercommunal violence.