This article is part of our in-depth coverage. Read more like this...
KAMPALA, UGANDA

After months of negotiations aimed at ending a civil war that has killed tens of thousands of people and forced some 4.5 million from their homes since December 2013, South Sudan’s President Salva Kiir and rebel leader Riek Machar signed new power-sharing and ceasefire agreements on 5 August.

The conflict, coupled with a dire national economy, the difficulty of delivering humanitarian aid to warring areas, and the widespread disruption of livelihoods, has left some 60 percent of the population at risk of not getting enough to eat.

This briefing, drawn from interviews with analysts, rights advocates, aid workers, and refugees, assesses whether the new agreements represent a major milestone in ending the civil war or are more likely another false dawn for efforts to forge lasting peace.

The title of the document is a bit of a mouthful: Agreement on Outstanding Issues on Governance and Security Arrangements. Its signature by Kiir, Machar, and, in a last-minute policy U-turn, representatives of several other armed groups (under the umbrella of the South Sudan Opposition Alliance), marks another step towards the signing of a revitalised Agreement on the Resolution of the Conflict in the Republic of South Sudan (ARCSS).

The original ARCSS, supposedly a comprehensive peace deal, was inked in 2015 (by fewer signatories) but quickly collapsed. It was derided by some as fundamentally ill-conceived. The main difference between it and the new power-sharing formula is that the envisaged cabinet and parliament have been expanded to include more people.

Other recent steps in resuscitating the ARCSS were the 27 June signing of the Khartoum Declaration – which included a permanent ceasefire (which is largely holding) and a commitment to withdraw troops from urban centres – and a detailed agreement on security arrangements signed on 6 July.

Three days after signing the latest power-sharing agreement, the president granted a general amnesty to Machar and other rebel leaders. Another round of talks began in Khartoum on 13 August to tackle some unresolved issues.

What does the deal mean for civilians in need?

More than six million people in South Sudan are facing “crisis” or “emergency” levels of acute food insecurity, according to UN agencies. “Emergency” is just one level down from the worst situation, famine, which reached some parts of the country in early 2017.

In areas affected by conflict, “it will be difficult for households... to realise a harvest… and the possibility of extreme food insecurity through to January 2019 will remain,” the UN agencies warned, pointing in particular to Leer and Mayendit counties in former Unity State, in the Greater Upper Nile region. 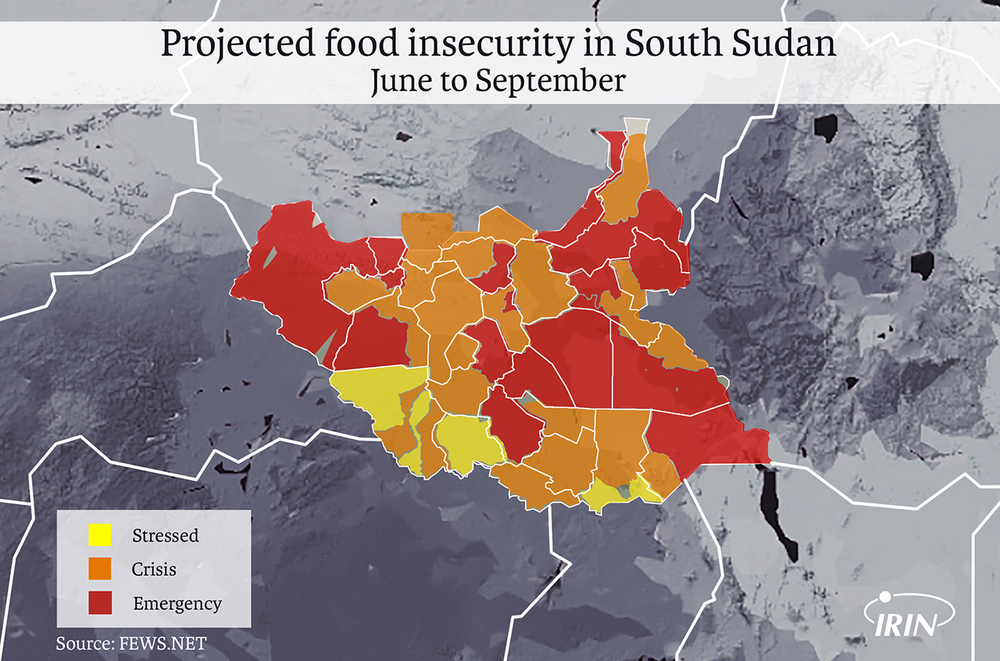 Several aid agencies told IRIN they see potential for the latest deal to bring an end to the suffering of millions of civilians, especially if it leads to improved access to areas where it has been too dangerous to deliver assistance.

“When people see aid workers doing their work in safety, they will be better able to conduct their own day to day activities,” said Rosalind Crowther, country director for CARE.

But the country’s 12 million citizens are not a primary consideration for the agreement’s signatories, according to Jok Maduk Jok, a former government minister who is now the executive director of the Sudd Institute, an independent research group.

“Leaders will now work for their entry into public offices, but none of them will think about the people who suffered so gravely from a war that was none of their choosing,”  he wrote in a Facebook post.

How will power be shared?

The latest agreement paves the way for Machar to return to South Sudan as one of five vice-presidents under Kiir in a three-year transitional government of national unity, due to be formed within three months of the final peace deal being signed. No date for that key event has been set.

The agreement also provides for a 35-strong cabinet, with 20 ministers drawn from the government, nine from Machar’s Sudan People's Liberation Movement-in-Opposition and six from representatives of other opposition groups. The legislative assembly will have 550 lawmakers, 332 from government, and 128 from the opposition.

There has been a reduction in fighting since the Khartoum Declaration was signed, and humanitarian access to several areas has improved.

“Leaders will now work for their entry into public offices, but none of them will think about the people who suffered so gravely from a war that was none of their choosing.”

What role did regional and global leaders play?

Pressure from the likes of Ugandan President Yoweri Museveni, and his Sudanese and Kenyan counterparts Omar al-Bashir and Uhuru Kenyatta, coupled with a 13 July UN Security Council arms embargo and extended targeted sanctions, helped drive Kiir and Machar to sign the power-sharing deal.

Daniel Akech Thiong, an independent consultant focused on politics and economics on South Sudan, said the pair were keen not to disappoint their respective backers, Museveni (in the case of Kiir) and al-Bashir (for Machar) “who are themselves motivated by the hope of cashing in during peacetime… [having] seen an economic opportunity to exploit, but which requires the end of the civil war.”

Thiong pointed to the $26 Khartoum receives in fees for every barrel of oil that landlocked South Sudan exports through Sudan, and explained that “South Sudan's share of the oil wealth will be spent on buying goods from Uganda.”

Is the end of the war within sight?

Relief and some jubilation swept across Juba when news of the signing of the new accords reached the South Sudanese capital. But a tweet from Museveni, one of the guarantors of the peace process, immediately put things in perspective. “We are congratulating ourselves over many dead bodies in South Sudan over the last four years,” he wrote.

A reality check was provided on 10 August when Britain, the United States, and Norway – the so-called “Troika” that helped end Sudan’s protracted civil war in 2005 and deliver South Sudan’s independence six years later – dismissed the current peace process as a road to nowhere.

“We are concerned that the arrangements agreed to date are not realistic or sustainable,” they said in a joint statement. “The best hope for sustainable peace is a process inclusive of ordinary men and women, civil society, religious leaders, ethnic minorities, and other excluded groups.”

Jok’s assessment echoed some of those concerns. “The threats to this arrangement will most likely come from outside the government, from youth groups, from ethnic communities that were most affected by conflict that are clearly excluded and who will now be waiting for some sort of reparations in the form of money and reconstruction efforts,” he told IRIN.

A reality check was provided on 10 August when Britain, the United States, and Norway – the so-called “Troika” that helped end Sudan’s protracted civil war in 2005 and deliver South Sudan’s independence six years later – dismissed the current peace process as a road to nowhere.

For Juliette Paauwe, research analyst at the US-based Global Centre for the Responsibility to Protect, it will take more than a power-sharing deal between two bitter enemies who have already broken about 10 previous agreements to end the bloodshed.

“Only time will tell if this agreement will last or simply be a brief pause before the killing resumes,” she said. “The people of South Sudan deserve lasting peace with justice, not gestures without substance.”

Could the conflict, in fact, escalate?

Mistrust, rather than reconciliation, still defines the relationship between Kiir and Machar, a fact underlined by the former’s snubbing of the latter’s bid for a handshake at the signing ceremony.

This mistrust “is a major risk factor for relapse to war,” warned Jok.

Thijs Van Laer of International Refugee Rights Initiative, an advocacy group, lamented the absence of any reference to accountability in the agreement.

“Not only does the document fail to reaffirm the urgent need to judge those responsible, but it also further empowers those responsible for atrocities, by giving them positions and resources, and fails to mention how spoilers of the agreement will be sanctioned,” he said.

Van Laer suggested some of those who signed the deal had been pressured to do so and that this makes it more likely they will take up arms again, while other individuals or groups might be tempted to resort to violence “to get a slice of the cake”.

“This new agreement has many unanswered questions and doesn’t do anything to solve the underlying political and security issues that led to conflict in 2013 and 2016, many of which could easily cause the entire process to derail,” he said.

Priscilla Pita, one of 60,000 South Sudanese living in the Imvepi Refugee Settlement in the Ugandan district of Arua, agreed. “It might be a short-lived deal and war breaks out again. We are tired of this war. We can’t continue suffering. We need peace, freedom, and joy,” she said.

Fellow refugee John Dada said he feared the latest deal would remain mere “ink and paper”. “But let it be the last chance. If they fail to implement and continue with war, the International Criminal Court should hold them accountable for war crimes.”

However, another refugee, Agnes Poni, was more optimistic. “I see seriousness. I congratulate President Kiir and Machar. They will implement it,” she said.

“It might be a short-lived deal and war breaks out again. We are tired of this war. We can’t continue suffering. We need peace, freedom, and joy.”

Issues under discussion in the current round of talks include the powers of the president and vice-presidents, representation in the judicial authority, as well as revision of the country’s administrative division and the naming of new ministries.

A number of other issues need to be resolved to improve the chances of lasting peace, including: the logistics of organising elections, how to integrate some rebel fighters into a national army and demobilise others, and how a cash-strapped government will fund the enlarged administration and still pay for essential goods and services across the country.

In its statement, the Troika underscored the importance of clarifying “how resources will be used in a transparent and accountable way for the benefit of all South Sudanese… how security will be provided in Juba during the transition period, and how meaningful checks will be placed on executive power.”

Another key challenge will be dealing with armed groups not party to the agreement such as the People’s Democratic Movement and the National Salvation Front.

Kiir and Machar have little to no command and control over various splinter groups within their respective forces, a fact that several analysts pointed to as one of the most considerable obstacles to resolving the conflict.

As Jok put it: the “massive elephant in the room” is “how to translate this elite pact into peace for all communities, overcoming the communal feuds that were made worse by the elite rivalry but not resolved by the peace deal.”