This article is part of our in-depth coverage. Read more like this...
GOMA

A recent wave of targeted attacks has left a trail of death, destruction, and mass displacement in the Democratic Republic of Congo’s northeastern province of Ituri.

The roots of the violence are framed in media reports as ethnic, but analysts and local observers say powerful political and commercial interests are what is really driving and exploiting the inter-communal tensions.

Between 1999 and 2004, some 50,000 people, mostly civilians, were killed in Ituri in fighting between different communities, sometimes backed by Uganda and Rwanda (see our In-Depth coverage). After more than a decade of relative peace, violence flared again in December and resumed in February on an even larger scale. More than 300,000 people have been displaced and thousands of homes torched in at least 70 villages, according to ACAPS, an independent humanitarian information service.

While there is little direct evidence, experts, Ituri residents, and the powerful Catholic clergy have all suggested that unseen forces are driving the violence. Jason Stearns, of the Congo Research Group, noted that inter-communal tensions had been “relatively well managed” since 2007.

Marcel-Heritier Kapitene, a former opposition activist who lives in exile in Belgium, where he works as a researcher on Congolese politics and mineral extraction at GRIP, a peace and security institute, warned that if competition over natural resources is the key underlying factor, as he fears, then the situation is likely to deteriorate.

“It could spread to other areas with a heavy human toll,” Kapitene said. “If a tribal militia allied itself to such and such Congolese or foreign armed group to try to have a certain dominance of minerals, gold, and above all timber, there is reason to fear the consequences could be much more severe.”

He added that, in Ituri: “People are dying; not because they are of one ethnicity or another, but because they share the same land with minerals.”

According to Thierry Vircoulon, an analyst with the International Crisis Group, many of Congo’s recent flare-ups, Ituri’s included, are fuelled by politics, often at multiple levels.

“Their immediate causes are local conflicts that have never been completely extinguished and which have been fanned by a national dynamic,” he said, noting an intense power struggle for administrative control in Ituri.

Vircoulon said the locations, perpetrators, and targets of the current violence in Ituri were similar to those at the start of the 1999-2004 fighting. He noted a sense of “déjà vu” and suggested the roots of the previous conflict had never been properly addressed.

“It was neutralised by the joint action of international forces and the International Criminal Court, before which several militia leaders were tried,” he said, referring to Operation Artemis, a French military mission briefly deployed in Ituri in 2002 under an EU banner.

For Nicaise Kibel’Bel Oka, director of the Eastern Congo Centre for Geopolitical Study and Research, chief among those unresolved issues are long-running land disputes between the predominantly agricultural Lendu and the cattle-rearing Hema.

Through Artemis and the ICC trials, “the international community thought it had restored stability to Ituri,” he said. “Sadly not."

“The little peace that reigned for the last 10 years was only ephemeral. It’s what we call a graveyard peace, unsustainable. It wasn’t enough to stop the resumption of violence, given that members of the two communities never handed over weapons they can still use at any time, and that the land disputes between them are still in place.”

Who is killing whom, and where

The violence has been concentrated in Ituri’s Djugu Territory, which lies to the north of the provincial capital, Bunia. The neighbouring territories of Mahagi and Irumu have also been affected.

The attackers have given no reasons for their actions, and no rebel leader from the dozens of armed groups operating in eastern Congo has expressed common cause with them.

“The security and intelligence services are trying to find out if this is an organised movement, who its leader is, or whether it is a movement of armed bandits,” Ngongo said.

He explained that the attacks were mostly carried out with knives, arrows, and machetes rather than firearms, but said the assailants had taken some guns from the army posts they raided.

Jean-Bosco Lalu, a civil society leader in Ituri, said he hoped further light would be shed on the perpetrators and their motives when the 40-odd people who had been arrested in connection with the attacks appear in court.

So far, the police have yet to release the identities of those detained.

“Here in Ituri, there is nothing like an ethnic or inter-ethnic war,” local bishop Dieudonné Uringi told Radio France Internationale in mid-March. The fact the attackers had communication equipment, money, and were well organised suggested that “invisible hands” were manipulating them, he said.

After a meeting in late February, bishops and archbishops from the region issued a statement warning of powerful forces trying “to pit ethnic communities against each other [that] seems destined to empty these areas of their inhabitants for unknown interests.”

The view of the refugees

Across the border in Uganda, among the 50,000 residents of Ituri who have fled, giving up their homes and their livelihoods, there are strong opinions about who or what is responsible.

“It’s all about oil and elections,” said an Ituri politician and businessman now staying in a refugee settlement.

“All these people you see here come from the areas which are full of oil deposits,” said the man, who asked not to be identified by name. “The government of [President Joseph] Kabila is using the Lendu to hoodwink the international community that the conflict is a result of past differences between the two communities,” he said. Major international oil firms are financing the conflict, he added, but he offered no evidence.

“They think relocating and compensating these people from the prospecting oil areas to allow their exploration will cost them a lot of money,” he said. “So it’s easier to start violence, kill and chase away the Hema instead of incurring costs.”

“Should one community or group feel excluded or perceive that the benefits of labour, social projects and/or compensation are inequitably distributed, it is likely to create resentment among other communities or groups, and to increase existing divisions and tensions,” warned the assessment. Conflicts could worsen “when compensation is due on land whose ownership is under dispute,” it said, pointing to evidence that even at the time of the report’s writing conflicts over land were “resurging partly because people hope to benefit from oil.”

READ: Oil rich yet on edge in Turkana

Another not necessarily competing theory is that Kabila has a hand in the unrest as he seeks to use it to justify delaying elections and remaining in power – his mandate expired in December 2017 and polls are now scheduled for this December.

“Kabila is ordering the Lendu to cause havoc so that elections don’t take place in DRC,” said Phoebe Dz’venga, a farmer and mother of five who is also among the Ituri residents who fled to Uganda. “When there is war, no elections can be organised.”

Kapitene, the researcher and former opposition activist, said politics was also spurring violence in other parts of Congo, such as Kasai, northern Katanga, and parts of the Kivus. In all these places “Congolese politicians will look for all kinds of ways to derail the electoral process, or postpone it indefinitely,” he said.

“Ituri’s proximity to South Sudan and several uncontrolled parts of the Kivus mean it is affected by the proliferation of light arms,” he noted. “For those who fish in the troubled waters of Congolese politics, it is unfortunately a godsend.”

Among those echoing this analysis was Xavier Macky, who heads Justice Plus, an NGO based in Bunia.

Ituri is an ideal choice of location for political troublemakers “because they know that peace is still fragile there and they think it’s easier to manipulate the Hema and Lendu ethnic groups who are still travelling the hard road of reconciliation,” he told IRIN. 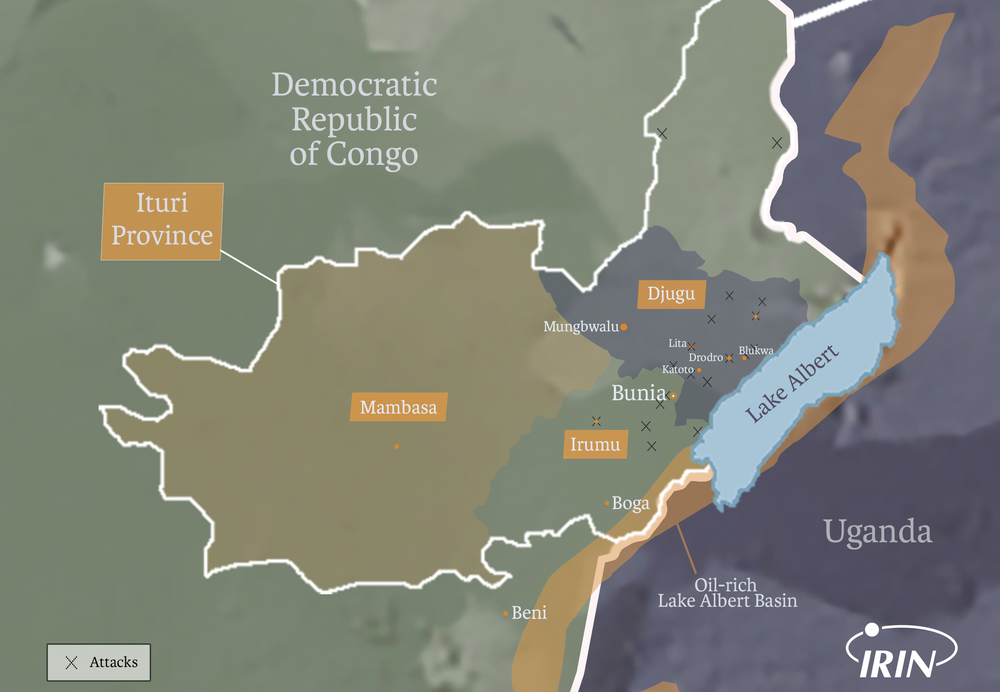 A major bump in that road lies in overcoming deep-seated attitudes about who Ituri belongs to.

"These Lendu people believe Ituri province is their place,” explained Bunia resident Kefa Baraka, now also a refugee in Uganda. “They believe that the Hema, who are known as people who migrated from Uganda to Congo, don’t have a place there."

Kapitene agreed that more should have been done to turn the page on Ituri’s tensions.

“We never helped the Lendu and Hema understand the importance of peaceful cohabitation. We simply stopped the violence without setting in motion proper reconciliation,” he said.

Batidho Banapea, of Search for Common Ground, an international peacebuilding NGO with an office in Bunia, said this effort must begin now. To succeed, the process will have to include many facets, including “the economy, health, education, women, youth, reintegration of former combatants, war victims and children who come out of armed groups,” he said.

In mid-March, the army began a series of operations codenamed Tunapenda Salama (“We Want Peace”) to stem the attacks and re-establish state authority.

Since then, according to Lalu, the civil society leader, safe corridors have opened up and some displaced people have started returning to their villages. The army spokesman said markets in some of the attacked villages have also begun to reopen.

The administrator of Djugu Territory, Alfred Bongwalanga, was encouraged that leaders of both the Hema and Lendu communities have been issuing calls for peace, and for peaceful cohabitation. Neither group profited from the previous conflict and are well aware it slowed down much-needed development in the province, he said.

No attacks against civilians have been reported over the last 10 days. But, according to ACAPS, disruptions of maize harvests mean the impact of the violence in Ituri is likely to last several months. More than 30,000 children in the province are out of school.

If the Hema community do try to retaliate, Lalu warned there could be a repeat of what happened in 1999-2004, when violence spread to engulf all of the province’s communities.

“Right now, we are calling for a total halt in hostilities,” he said. “After that, the courts must do their job properly so that victims benefit from legal reparation mechanisms.”

(TOP PHOTO: On 5 March 2018, internally displaced Congolese are seen in the early morning getting into boats that will take them to the relative safety of Uganda. CREDIT: John Wessels/MSF)

See our In-Depth coverage of the Ituri Province