Read about what we achieved.
TUNIS

Social media has become a bush telegraph in the Libyan capital Tripoli, used by anxious citizens to warn each other of militia violence and how to get around the endless shortages as the economy crumbles.

Each day thousands of citizens send each other tips, with the phrase “red light” indicating a district or intersection where militias are fighting, or capturing people for ransom. Residents have formed Facebook groups to swap tips on where to find the few petrol stations that have supplies or banks with currency, or how to buy medicines when hospitals’ stocks are exhausted.

One post from early December shows photos taken by mobile phone of burning cars and columns of smoke, with an anonymous poster writing: “In Ain Zara district, car on fire, for your information this is the fourth car in a brief time, please be careful and take precautions.”

“On Facebook you’ll find people recommending where you can find petrol, shops that use credit cards,” said one Facebook user from Tripoli, at her request anonymous. “The electricity board use it to tell people how many hours power cuts will last.”

Seven years after its “Arab Spring” revolution that toppled leader Muammar Gaddafi, and three years into its civil war, that social media is the only way to find necessities is one sign that the wheels have come off in Libya. Economic collapse and militia violence has left much of the country ungoverned, allowing human trafficking and horrendous treatment of migrants to go unchecked. Amidst this chaos, a recent CNN report that migrants are being sold as slaves was shocking, but not a surprise.

Libya’s most acute shortages are water. In late November, a militia shut off valves south of Tripoli to the Great Man-Made River, an irrigation pipe that pumps water to the city from huge underground reservoirs in the Sahara. Without rivers or desalination plants, the situation in the capital quickly grew dire, with residents scouring shops for water bottles and helping each other to draw water from ancient wells.

Several groups drilled through pavements to get to groundwater, using generators to pump it up and bottle it on the spot. UNICEF warned on 3 December that locals were resorting to “potentially unsafe or contaminated water, increasing the risk of an outbreak of waterborne diseases.” 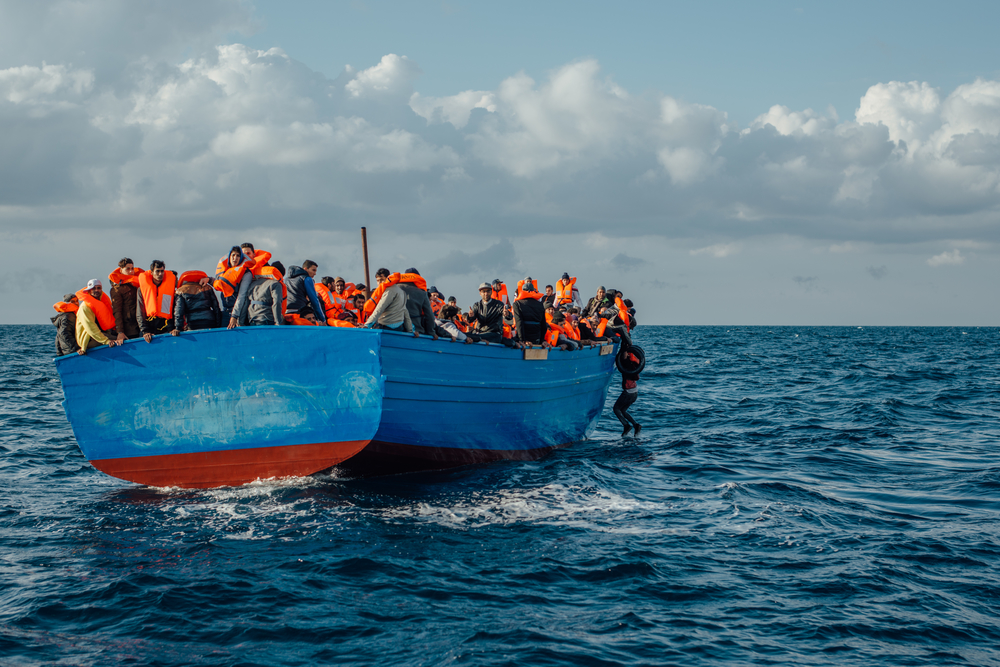 Libya has three rival governments, but this militia, based in southwest Libya, is not affiliated with any of them. It appears that cutting the water supply was a demand for the release of its leader, held by a rival militia in Tripoli. After five days, the militia relented and water returned to the city’s taps, although no details were made public on whether its leader had been set free.

Power cuts too are frequent, some lasting many days, particularly in the summer when air conditioning sees the power system short out. Some of the outages are the result of fuel oil being taken by militias, with the National Oil Corporation saying much of Libya’s imported petrol is re-exported by militias who smuggle it to Europe. But Libya’s power stations were worn out before the revolution, and shortages of equipment and spare parts have left the country lacking 37 percent of the necessary generating power.

Hospitals are also in a bad way, with the UN-backed Government of National Accord in Tripoli unable or unwilling to pay for more help. “Hospitals have no medicines or supplies, people have to take them with them for operations, the health service has collapsed!” one Tripoli resident recently tweeted.

In July, the World Health Organization reported that only four of 80 hospitals in the country are working even at 75 percent capacity, and a further 17 had closed, along with one in five primary healthcare facilities. It blamed “fragmented governance, limited financial resources, deficient human resources, acute shortage of lifesaving medicines and basic equipment, a debilitated primary healthcare network, and neglected health services.” 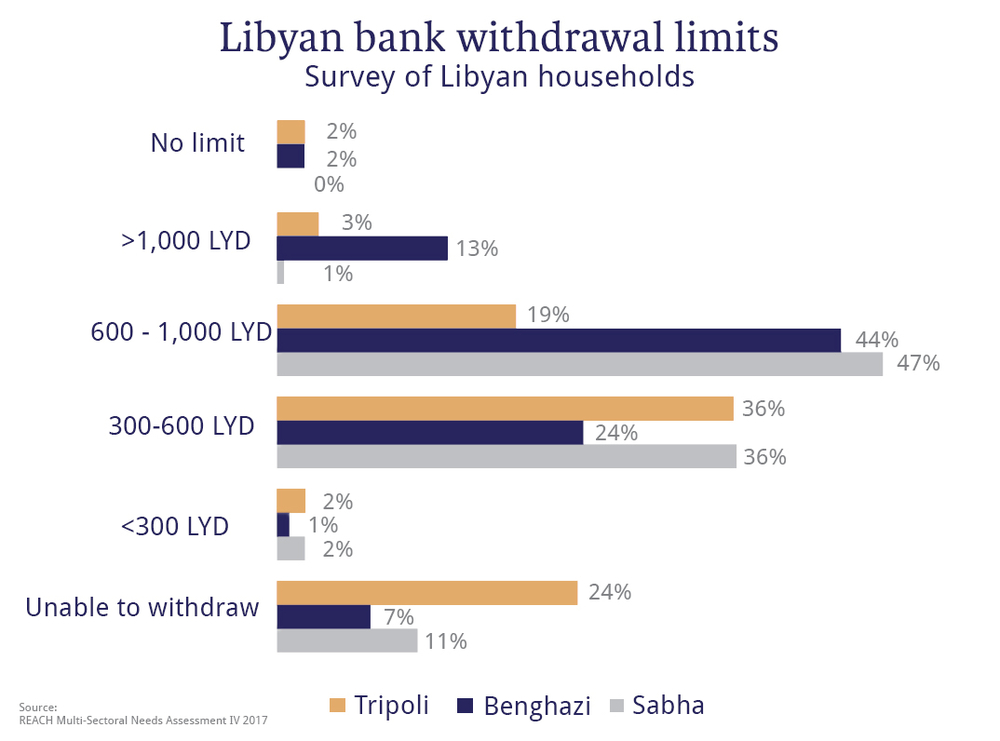 Complicating the need to find scarce medicines, petrol, or water bottles, money to buy these basics is also in short supply. Few banks have cash, and those that do typically restrict Libyans to withdrawals of 300 Libyan Dinars (around $200) a day. Officials blame the shortages on cash hoarding because businesses and individuals no longer put money in banks, fearing they’ll be unable to get it out again. Meanwhile, sagging confidence in the national currency has seen the dinar nudge 10 to the American dollar on the black market, seven times the official exchange rate.

Perhaps the worst-off are two groups: migrants seeking work or a boat to Europe (they often find themselves trafficked, abused, or in detention centres with horrific conditions), and the approximately 200,000 internally displaced who have had to flee their homes inside Libya; some because their tribes or groups have been evicted from fighting zones, others because their homes are in ruins after more than three years of civil war.

In eastern Libya, police and army affiliated with a parliament based in Tobruk have begun to take control, but in Tripoli and much of the west of the country the militias still rule supreme. As the economy sinks, they indulge in criminality, be it fuel smuggling, people smuggling or kidnapping. Abductions are common in Tripoli, with militias grabbing individuals off the street to “sell” them back to their families.

The UN Panel of Experts on Libya said in a June 2017 report that it had received “numerous reports of kidnappings and arbitrary detentions used by armed groups for political or material benefit. Politicians, activists, bank employees and journalists are frequent targets.”

Migrants are regularly extorted for ransom, subject to sexual abuse, and – it now seems – some are sold as slaves.

Help on the way?

The international community may finally be stepping in to alleviate some of the suffering, at least for migrants. Following an EU-African Union meeting in late November, there’s a new plan for the International Organiszation for Migration to evacuate migrants who want to return home and move them from overcrowded detention camps. Although, how and if this will work remains to be seen.

Politically, the UN has taken the lead in trying to end the civil war, focusing on reforming the government it backs in Tripoli, the GNA, so it can become a true unity government.

A UN-chaired commission formed the GNA two years ago, appointing a nine-strong presidential council, but it has struggled to find support and its lack of popularity means it has been unable to create a police or security force – it is based in a naval base because the rest of the capital is simply too dangerous.

A new UN envoy, Lebanese former culture minister Ghassan Salamé, was appointed in June, and unveiled a plan in September that he calls a “Road Map” designed to reboot the GNA.

But the UN-backed GNA has rivals for power: The elected parliament in the eastern town of Tobruk, with general Khalifa Hafter as its army commander, has refused to accept it. In Tripoli, some militias back the GNA but others back a rival Salvation Government (also based in Tripoli), and armed clashes continue between the two groups. 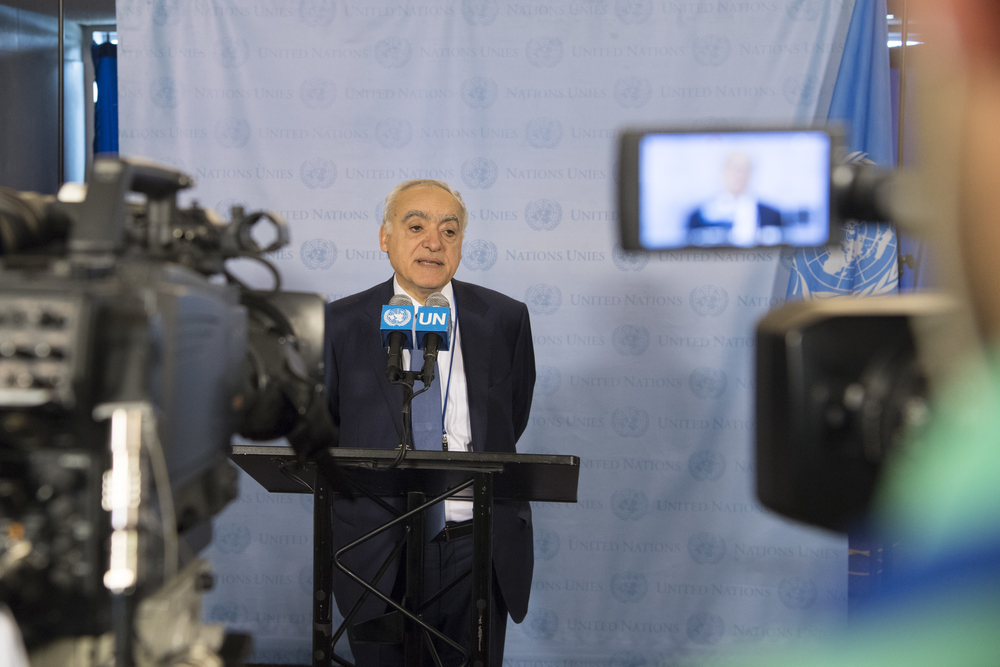 Legally, the GNA can govern the whole country only after the Tobruk parliament has voted in favour of it, but such a vote has not come.

Salamé's Road Map is an attempt to reform the GNA, cutting its presidency from nine members to three, in the hope this will persuade all Libya’s factions to give it their support. His plan hinges on a general conference of all Libyan groups pencilled in for next February, in which Salamé hopes to find agreement to defer to the GNA, and to hold elections later next year.

It’s a tall order. Successive UN envoys have failed to devise a governing structure all Libya’s disparate groups will work within, the most obvious failure being the 2014 elections, which the UN supervised and which were the trigger for civil war.

Salamé's public statements have generally been relatively optimistic, but his comment last month to the Security Council hinted at the challenges ahead as well as the extent of current chaos: “Elections should not take place until we are certain that they will not add a third parliament or fourth government.”