Read about what we achieved.
OROMIA/SOMALI REGIONS

Lifting her robe the young woman revealed undulating scar tissue blanketing her breasts, stomach, and extending up her neck and along her arms.

“They poured petrol over me then lit it,” said 28-year-old Husaida Mohammed. “They were Somali boys.”

When IRIN met Mohammed she was in a camp of about 3,500 displaced Oromo people on the outskirts of Harar, the ancient walled city in Ethiopia’s Harari Region.

It had taken her over a month to make the 100-kilometre journey to safety from Jijiga, the capital of Ethiopia’s far eastern Somali Region. For weeks she lay hidden in an empty Oromo-owned house tended to by friends as she recovered from her injuries.

Next to her in the large warehouse being used to shelter the displaced was a woman in a striking pink robe. She had no visible injuries but didn’t utter a word.

“She was throttled so badly they damaged her vocal chords,” a doctor explained. “She can’t eat anything, only drink fluids.”

Tit-for-tat ethnic violence in Ethiopia’s two largest regions of Oromia and Somali began in September and has forced hundreds of thousands from their homes. Local media have reported upwards of 200,000 displaced, humanitarian workers at the camps talk of 400,000.

The unrest began when two Oromo officials were reportedly killed on the border between the two territories, allegedly by Somali Region police.

On 12 September, protests by Oromo in the town of Aweday, between Harar and the city of Dire Dawa, led to rioting that left 18 dead. The majority were Somali khat traders, a mildly narcotic leaf widely chewed. Somalis who fled Aweday said the number of dead was closer to 40.

In response to Aweday, the Somali Regional government began evicting Oromo from Jigjiga and the region. Officials say this was for the Oromo’s own safety, and that no Oromo died as a result of ethnic violence in the region – a claim disputed by those displaced.

In addition to the camps around Harar and Dire Dawa – cities viewed as neutral safe havens – they have popped up elsewhere along the contentious regional border.

In these camps Oromo and Somali tell equally convincing stories of ethnic violence. They accuse the regional special police – in the Somali Region known as the Liyu, and the Oromia version, referred to by Somalis as Liyu Hail – of being behind many of the attacks*.

Both regional governments deny their police forces were involved.

The federal government faces fierce accusations ranging from not doing enough, to deliberately turning a blind eye to the violence.

The Oromo see this as punishment after their year of protests against the ruling party that led to a state of emergency.

There has also been a legacy of distrust of the Somali Region in Addis Ababa. The perception is that among the population there is revanchist sympathy for the idea of a Greater Somalia.

Another possibility is that the government simply has not had the capacity to effectively respond, so widespread has been the violence. 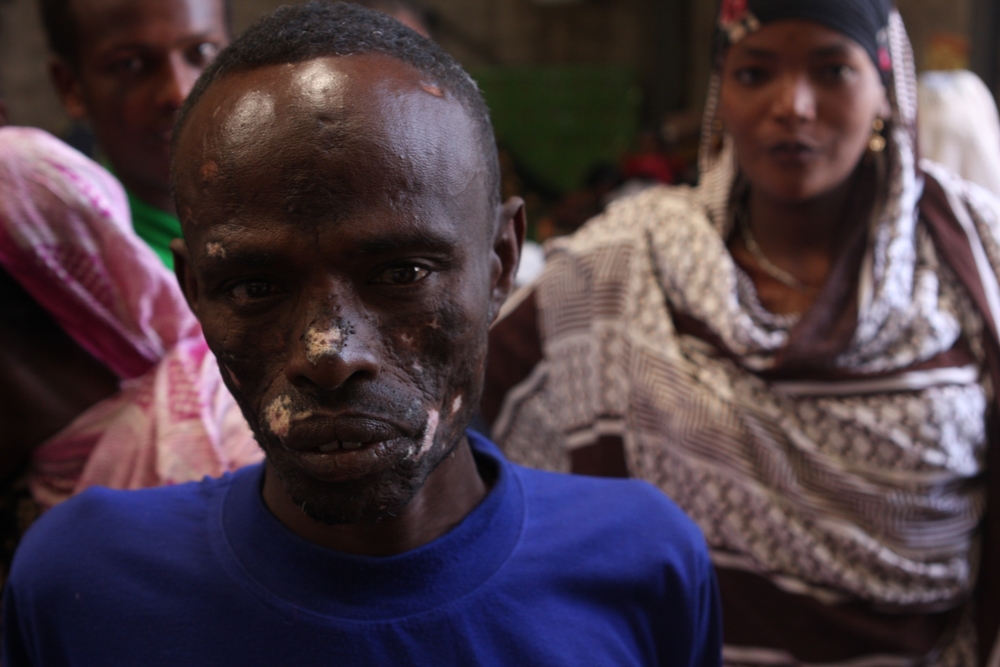 James Jeffrey/IRIN
Victim of the violence

History of strife and harmony

Ethnic conflict along the common border and in the rural hinterland has long existed – with Oromo migration a particular source of friction.

The ongoing drought, which has put pressure on pasture and resources, could be another.

“As you move west of the regional border the land becomes higher with more water and pasture,” said the head of a humanitarian organisation who spoke on condition of anonymity over the sensitivity of the issues.

In 2004, a referendum to decide the fate of more than 420 kebeles around the border—Ethiopia’s smallest administrative unit—gave 80 percent of them to the Oromia Region. This led to thousands of Somalis leaving areas for fear of repercussions.*

The referendum still hasn’t been fully resolved, which some say could be another factor behind the current conflict.

At the same time, many of the displaced spoke of their shock at how the violence broke out in formerly close-knit communities that had integrated peacefully, often for centuries, and in which intermarriage between Oromo and Somali was the norm.

Some of the history and scale of this violence can be found 80 kilometres east of Dire Dawa, just over the regional border in the Somali Region, where two giant camps for displaced Somalis are co-located in the lee of the Kolechi Mountains.

In the older camp are 5,300 Somali households displaced by a mixture of drought and ethnic violence since 2015. In the newer camp are 3,850 households – roughly six to 10 people each – all made homeless by the recent trouble.

One Somali man who arrived nine months ago, before the current surge of unrest, recounted his experience at the hands of Oromia’s Liyu Hail in Oromo’s Bale zone, hundreds of kilometres to the southwest.

He said a violent mob of Oromo militia had come to his village so he and a group of about 40 men went to the regional police to request protection.

“But the man in charge ordered his men to fire at us,” the Somali man said. “Everyone fell – I wasn’t hit but I was covered in so much blood from the others the police thought I was dead, and I escaped.”

He claims 200 people in total were killed and 893 houses were burned: “Everything was looted, all livestock taken – it was unimaginable.”

The people in both camps pull back clothing to reveal old bullet wounds, scars, and lesions from burns, and broken bones that never healed.

A number of displaced Somalis say they survived thanks to the intervention of soldiers from the Ethiopian Defence Force during the recent violence. But it wasn’t enough to persuade them to remain, or to return.

“If the federal government sends forces to keep the peace, they stay for a week or a month, and then after they leave it happens again,” said one Somali man. “We can’t risk staying.”

The violence has also crossed borders with reports of Oromo leaving ethnically Somali Djibouti and Somaliland, where two Ethiopians were reportedly killed in the capital, Hargeisa. It’s believed this could have been the revenge of relatives of some of the traders that died in Aweday.

For the Oromo and Somali displaced from their homes, the next step is to find a long-term solution.

But Ethiopia’s federal system devolves quite a bit of power to ethnic regional states. With sectarian anger still running high, this leaves the government in a quandary over how to respond to the crisis, some commentators have pointed out.

“[Those displaced] could be integrated in the communities where they are now, resettled elsewhere, or returned to their original communities,” said one official in an international organisation who asked for anonymity.

“The government [is] committed to everyone being able to return home, as is their constitutional right to live where they want, but for most [of them] we are not sure whether this is possible.”

TOP PHOTO: This Oromo woman lost her husband during evictions from the Somali Region and has no idea of his condition or whereabouts

* CORRECTION: This version of the story clarifies the use of the term Liyu Hail and adds a paragraph on the 2004 census