This article is part of our in-depth coverage. Read more like this...
KINSHASA

Militia attacks and army reprisals have uprooted 1.4 million people in a previously stable region of the Democratic Republic of Congo (DRC). The conflict has helped double the number of displaced people in the country in the year to June. The Catholic Church reports killings of over 3,000, amidst UN reports of mass graves and widespread abuse of civilians.

Refugees have fled to Angola, agricultural land lies idle and humanitarian agencies are ringing the alarm bell at the prospect of food shortages and continuing violence.

The clashes have pushed the DRC to the top of an unenviable league table: it is the country with the most internally displaced people (IDPs) in Africa. At the end of June, 3.8 million people out of the DRC’s population of 75-85 million were displaced, according to the United Nations Office for the Coordination of Humanitarian Affairs (OCHA). Just 12 months ago, the figure was 1.7 million.

Stephen O’Brien, the UN’s Under-Secretary-General for Humanitarian Affairs, told IRIN that “there has been this new, very serious spread of humanitarian need as a result of the massive escalation in violence in different areas” in the DRC.

Grand Kasai is a central region until recently spared the intercommunal conflict that in recent decades has terrorised other parts of the country, most notably the eastern provinces.

However, according to Médecins Sans Frontières, in under a year, Grand Kasai “has transformed from a peaceful area in a troubled country to the epicentre of one the most serious humanitarian crises in the world”.

Since August 2016, 1.4 million inhabitants of Grand Kasai—which encompasses five of the DRC’s 26 provinces—have been forced from their homes, escaping violence perpetrated by a variety of militias and the Congolese government. 850,000 children are among them, according to the UN Children’s Fund (UNICEF), and nearly one million people have been displaced during the course of this year.

Why has this formerly sedate region exploded and who is responsible?

A customary dispute gets out of hand

The origin of a conflict which has caused wholesale misery in an area the size of Germany was relatively humdrum: a disagreement over traditional authority in several villages in Kasai-Central province.

In 2012, Jean-Pierre Pandi returned home from South Africa to succeed his deceased uncle as the sixth ‘Kamwina Nsapu’, one of the main customary chiefs in Dibaya territory in  Kasai-Central. Such chiefs play an important role, exercising considerable control over land and administration in their domains. Supposedly apolitical and selected according to traditions, they nonetheless need to be recognised by the central state, a requirement which encourages chiefs to support the regime and the government to endorse biddable claimants.

In Grand Kasai the interplay between customary authority and President Joseph Kabila’s administration is particularly complex because the region is an opposition stronghold.

Kinshasa refused to officially recognise Pandi and last year he adopted an increasingly belligerent tone against the government, which he characterised as illegitimate and foreign. (Many of Kabila’s opponents claim that he is a Rwandan occupier.) Tensions escalated in April 2016 when the provincial authorities visited Pandi’s chiefdom while he was in South Africa to search for weapons and he later accused the soldiers of defiling sacred objects and attempting to rape one of his wives.

Pandi urged his followers to destroy the symbols of the state, such as public buildings, and drive out its agents. On 12 August 2016, he was killed at his home during clashes between his fighters and security forces. The government says that it wanted to arrest Pandi and he was shot accidentally but other sources talk of troops mutilating the chief’s corpse.

Following Pandi’s death, the violence took on a new dimension as Kamwina Nsapu, the name adopted by a militia made up of Pandi’s followers, intensified its attacks against the state and spawned new iterations —professing similar grievances against the national authorities—in other parts of Grand Kasai. According to a leaked UN report seen by Reuters, the “conflict moved away from an insurrection of a specific community towards a larger upheaval, spreading the Kamuina Nsapu label far beyond its initial confines”. Clashes occur almost daily, according to the UN.

Assaults targeted large towns such as Kananga, Tshikapa and Tshimbulu, as well as smaller villages, as the fighting spread from Kasai-Central to the provinces of Kasai, Kasai-Oriental, Sankuru and Lomami.

The ferocious response of the Congolese armed forces has earned widespread condemnation.

Violations on all sides

Throughout the conflict, the United Nations has criticised Kamwina Nsapu for recruiting children, as well as for attacking state installations and employees, while the government describes the militia as a terrorist group.

Some of the 12,000 IDPs at Komba camp on the outskirts of Tshikapa, a city in Kasai province, can attest to Kamwina Nsapu’s brutality. Koloma Kiwunga’s village was invaded in April. “They made women and children enter their houses and then they burned them”, she told IRIN.

“Kamwina Nsapu burned everything we had… They hunted us and butchered our brothers and our children”, said Peter Mosanto, who fled at the same time.

The DRC’s military has been accused of deploying disproportionate force against the militia and those considered sympathetic to it. Videos filmed by soldiers have emerged showing the military unloading their automatic weapons into men, women and children who are unarmed or equipped only with sticks and knives.

According to the UN’s Joint Human Rights Office (UNJHRO), the army and police carried out at least 185 extrajudicial executions, including 16 women and 53 children, in just three towns in Kasai-Central during March and April this year.

The military has rejected allegations that troops have routinely responded with excessive violence and point out that in early July a court convicted seven soldiers caught on video murdering suspected militia members.

The UN also says that it has so far discovered 80 mass graves in three provinces of Grand Kasai and has attributed most of them to the Congolese army. According to the UNJHRO, up to  30 June 2017 the organisation “had identified a total of 42 mass graves [an additional 38 sites were announced in July] … the majority of which were reportedly dug by elements of the FARDC [DRC Armed Forces] following clashes with alleged militiamen”.

José Maria Aranaz, UNJHRO’s director, told IRIN that “witnesses” had informed his staff that the military are responsible for the the graves. In March, a Reuters reporter interviewed people in Kasai-Central who claimed to have seen army vehicles dumping bodies at the graves.

The government has countered these allegations by blaming the militia for the mass graves and claiming that some sites identified by the UN are in fact empty.

The evolution of a complex conflict

Whereas in the early months Kamwina Nsapu principally targeted the state–the military, police and government officials—newer militias appear more motivated by killing and expelling members of other ethnic groups. “The reporting I have been given shows that there has been a proliferation of groups”, UN humanitarian chief Stephen O’Brien told IRIN during a visit to Grand Kasai in July. 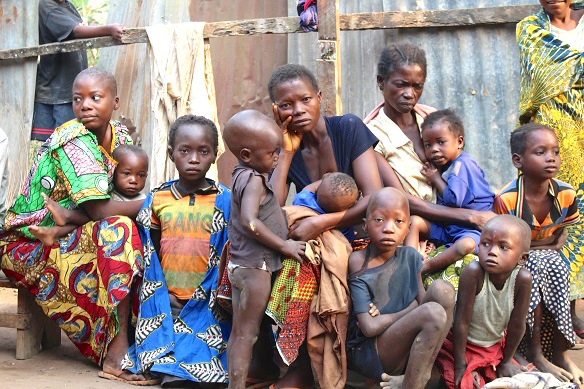 OCHA
A group of people displaced by conflict in Dibumba, Tshikapa, Kasai region of DRC
During interviews with IRIN, several IDPs at Komba camp, nearly all of whom are Tchokwe or Pende, conflated the militia and the Luba people, saying that they had been attacked on ethnic grounds. “The Luba people we call Kamwina Nsapu chased the Pende and Tchokwe from their homes”, Ndala Sabin told IRIN.

A harrowing new development has been the emergence of Bana Mura, a largely Tchokwe militia, which has been accused of killing and mutilating hundreds of Luba and Lulua civilians, while receiving support from the government. In June, Zeid bin Ra'ad Zeid al-Hussein, the UN High Commissioner for Human Rights, updated the HRC on testimony gathered from Luba and Lulua refugees who had sought safety in Angola. According to Zeid, “my team saw children as young as two whose limbs had been chopped off; many babies had machete wounds and severe burns… At least two pregnant women were sliced open and their foetuses mutilated.”

He added that “victims also reported that members of local units of the Congolese army and police … have accompanied some Bana Mura attacks, and said some state agents are involved in arming and directing the militia”.

Furthermore, according to the confidential UN report seen by Reuters, Kamwina Nsapu itself has split into “pro- and anti-government… factions”.

It is difficult to know with any certainty the number of people who have died as a direct result of the conflict but some organisations have put forward their assessments.

In late June, the Catholic Church said that at least 3,383 people had been killed by Kamwina Nsapu and Congolese security forces in Grand Kasai. A month earlier, Delly Sessanga, an influential opposition parliamentarian, published an investigation stating that the violence had caused the deaths of 3,307 people in two provinces (Kasai-Central and Kasai) since August 2016.

The UN’s official statistics are far lower. According to the UNJHRO, in the first six months of 2017 “at least 428 people, including 17 women and 140 children, were killed by the FARDC and at least 37 people… by Kamwina Nsapu”. However, the same report clarifies that “the UNJHRO thinks that human losses … during this period are in reality much higher”.

Aranaz, UNJHRO’s director, told IRIN that “our figures are too conservative as we only report verified information”, adding that “particularly in the beginning of the conflict we had our access restricted which impeded the verification”.

While the death toll remains unclear, there can be no doubts that Grand Kasai faces an acute humanitarian crisis.

According to OCHA, only 156,000 of the 1.4 million IDPs received emergency assistance from new funding this year; people interviewed by IRIN at Komba camp said that they had not benefitted from any humanitarian support.

The World Food Programme has said that 42 percent of households in Kasai, Kasai-Central and Kasai-Oriental are food insecure.

According to the Norwegian Refugee Council, “a massive food crisis now threatens to shatter this fragile situation [as] the first two shorter planting seasons this year in the Kasaï region have largely been missed, and people are rapidly running out of food to sustain themselves”.

The emergency in Grand Kasai took the world by surprise. The UN and NGOs have had to scale up operations quickly—and often from scratch—and are hamstrung by lack of resources. This year OCHA has appealed for international donors to provide $748 million for its DRC-wide humanitarian response plan and in April launched a $64.5 million flash appeal exclusively for Grand Kasai.

Seven months through the year, they are financed at only 24 percent and 11 percent respectively. According to OCHA, this represents its lowest funding level of the past 10 years in the DRC.

As a senior OCHA official stated in early July, “we can redeploy our staff, fly in new expertise, distribute food and medicine in all corners, but without money, we won’t be able to respond to the level that we need to”. At the end of his visit to DRC, O’Brien told local journalists that it “is not just insufficient–it is unacceptable for the global community to leave this very real suffering of the Congolese people unaddressed.”