There was hope last year that the election of President Faustin-Archange Touadéra would bring real change to the troubled Central African Republic. But 12 months on, he has been unable to extend his authority beyond the capital, Bangui, and the rest of the country is as lawless as ever.

Fatimatou Issa and her family witnessed that violence first-hand last month. They’d heard rumours of trouble for days, but when the ex-Séléka rebels drove up, they had no time to react.

At first, they assumed the men had come to fight other rebels. But as bullets whizzed around the ethnic Fulani village of Mbourtchou, in CAR’s Ouaka Province, it was clear who they were targeting.

“They turned up in vehicles and were shooting everywhere,” said Issa, 26. “My husband fought back to protect the community, but he was shot in the head.”

Sweating in the dusty heat, Issa was standing outside a flimsy straw and bamboo hut at Elevache camp for displaced persons in nearby Bambari, a market town of red-earth streets and mud-brick houses 400 kilometres from Bangui.

“Many of the families here have been given nothing,” said community leader Mohammadou Saibou, who fled the same attack. “When we arrived, the Red Cross provided us with some food, but there wasn’t enough for everyone.”

A year on from democratic elections that promised a new era in CAR, the crisis is deteriorating, with armed groups in control of the vast majority of the country and civilians like Issa and Saibou the principal victims.

Renewed fighting between rebel groups in the central and eastern provinces of Ouaka and Hautte-Kotto is now dangerously close to reaching Bambari, CAR’s second largest town.

Together with fighting in Kaga Bandoro in the north, and Ouham-Pendé in the northwest, the number of displaced people has passed 411,000, the highest level since the crisis began.

Back in 2013, the conflict pitted the Séléka, a predominantly Muslim coalition of rebel groups from the north, who overthrew former president François Bozizé in a coup, against anti-balaka – a network of Christian self-defence militias that rose up in response.

Today, that dynamic has changed. After a de facto partition between Christians in the south and Muslims in the north, hostilities between the two groups have decreased. In its place is an explosion of fratricidal fighting between different factions of the Séléka, who were disbanded in 2014 and driven out of Bangui.

In Ouaka and Hautte-Kotto, the two main groups vying for control are the Union for Peace in the Central African Republic (UPC), dominated by Muslims from the Fulani ethnic group, and a coalition of rebels led by the Popular Front for the Renaissance in the Central African Republic (FPRC), dominated by Muslims from the Gula and Runga communities.

The UPC and FPRC split back in 2014, after FPRC leader Noureddine Adam demanded independence for CAR’s predominantly Muslim north, a move rejected by UPC leader Ali Darassa. Tensions festered when Darassa rejected FPRC attempts to unify ex-Séléka factions last October, and turned critical a month later after clashes around a gold mine in Ndassima.

Since then, violence has assumed an ethnic complexion with both groups targeting civilians associated with their opponents. The FPRC’s attack on Issa and Saibou’s village came after an even more brutal assault in Bria, 100 kilometres to the east.

Over three days, 21-23 November, the group singled out and slaughtered Fulani, a historically nomadic group who are falsely stereotyped as “foreigners” and “Chadians”.

To Saibou, who worked as a trader before fleeing the FPRC, that argument makes no sense.

“Our community has been here throughout the history of the country, even before independence,” he said, as a group of men prayed beside him. “So why do they say we are not from this country?”

Fulani that remain in Bria are now trapped in enclaves, and there are growing fears the same, or worse, could happen in Bambari.

FPRC forces are currently closing in on the town from two separate directions: Ippy from the northeast, and Bakala from the northwest. Their intention is to dislodge the UPC, “liberate the country from foreign armed groups”, and declare Bambari the capital of an independent state called the Republic of Lagone, or Dar al-Kuti.

The UPC are attempting to prevent their advance, but committing their own atrocities in the process. In Bakala, they executed 32 civilians and captured fighters in December, according to a report by Human Rights Watch.

Around 10,000 civilians fled to nearby Mbrés, Grimali and Bambari, with several thousand others camping out in the bush.

“They arrived on a Sunday afternoon and were attacking the Christian community and Gula [people] too,” said Christine Passio, a 45-year-old Christian who fled Bakala last December.

Homeless, she now lives in a straw hut near Bambari’s airstrip, surviving on meagre food rations tied up in a burlap sack.

“We had no time to take our belongings, and we spent three weeks travelling in the bush, carrying our children with no food,” she said.

For the time-being, Bambari remains conflict-free. But fighting between the two groups has poisoned relations within the town’s Muslim community, with the UPC targeting Gula and Runga they consider sympathetic to the FPRC.

“It’s the first time we’ve had this kind of division within the Muslim community,” said one humanitarian worker, who asked not to be named. “Every time there is a convoy to Bria or Bangui, they [Gula and Runga] are taking the opportunity to leave. Others have fled to the Christian side of Bambari”.

At the back of Notre-Dame des Victoires, a small Catholic church that doubles as a displaced persons camp for Christians, 32-year-old Zoyondonko Sogala Deya, a Gula, was remarkably calm.

Until recently, the father of three wouldn’t have dreamt of stepping foot in the area, which lies in the middle of Bambari’s anti-balaka-controlled territory.

But after Deya’s house was looted last month by UPC fighters, he said he had little choice but to seek refuge among the Christian community. Asked if he worried about living among anti-balaka, he shook his head. “I feel better living here with Christians than there with Muslims,” he said. “We are all scared of the UPC”.

For the time-being, Deya’s trust in the anti-balaka isn’t quite as crazy as it sounds. Wanting to share in the spoils of war, or to simply push the Fulani out of CAR, anti-balaka elements in and around Bambari have forged an opportunistic alliance with the FPRC, sworn enemies just a few months ago.

Sitting in a restaurant near his house on the west side of Bambari, Marcelin Orogbo, general-secretary of the anti-balaka in Ouaka, said the only thing he wants is “Ali Darassa gone”.

Knocking back bottles of Mokaf, a beer brewed in Bangui, he praised the FPRC for their “discipline” and argued that their objective in Bambari is simply “to kick out the UPC”.

How long that alliance lasts remains to be seen. When IRIN brought up the FPRC’s stated goal of dividing the country, Orogbo quickly rowed back. “If they go beyond their objective of getting rid of Darassa, we won’t accept it,” he said. “We are strictly against the division of the country. CAR is one.” 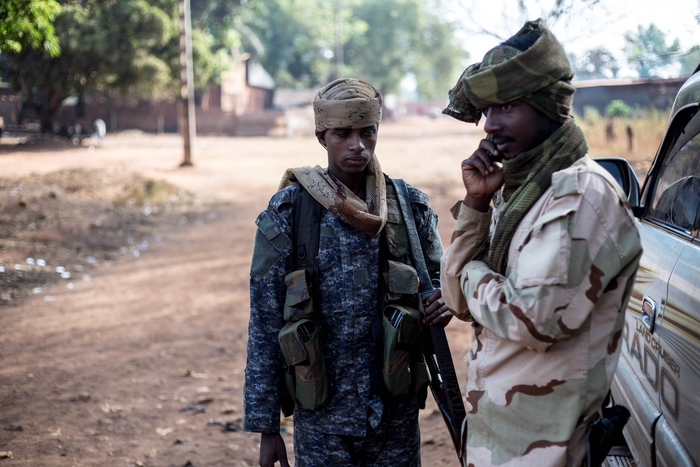 To stem the rising tide of violence in central and eastern CAR, the UN’s 13,000-strong peacekeeping force, MINUSCA, is fighting two separate battles in one of its biggest tests to date.

The mission, which has faced criticism of inaction despite its mandate to protect civilians, has drawn figurative “red lines” on the roads leading into Bambari to stop the FPRC from advancing. It has also issued an ultimatum to UPC combatants inside the town to leave.

“We are ready, willing and able to take over the city and we will do it,” said the UN’s bullish head of office in Ouaka, Alain Sitchet. “Bambari is going to be a weapon-free city.”

Others are less optimistic. The FPRC has already broken through one “red line” and, according to a well-placed source, is circumventing MINUSCA’s positions on the main roads by advancing to Bambari through the bush.

While reports this week suggested Ali Darassa has now left Bambari, UPC combatants remain in the city in plain clothes, and others continue to fight the FPRC in nearby towns and villages.

In an earlier interview with IRIN, Darassa – a towering figure scrunched into a plastic chair in a white robe – was deliberately ambiguous about his plans.

“If the civilian population want me to leave, I will leave,” he said, adding that protection of Bambari’s Fulani population remained his priority.

For its part, the central government appears almost completely powerless. It shows that “having a relatively well-accepted election produces a legitimate government in [the capital] Bangui, but it doesn't give you much more,” said Moncrieff.

To try and rein in the different armed groups, a dialogue over disarmament, demobilisation and reintegration has been initiated by President Touadéra, a former maths professor.

But previous DDR schemes in CAR have failed, and few are optimistic about the current attempt.

The FPRC, a new Ouham-Pendé-based armed group called Return, Reclamation, Rehabilitation (better known as 3R), and anti-balaka under the command of Maxime Mokom, have all boycotted the process.

Any measures ex-Séléka groups have taken to disarm have been “tokenistic”, said Lewis Mudge, a researcher with Human Rights Watch.

“If you think about it, there is no reason for them to [disarm],” he added. “They are benefiting. The UPC might be in a defensive position, but the FPRC and the Patriotic Movement for Central African Republic (another ex-Séléka group) are benefiting from conflict.”

The underlying grievances driving conflict have not been tackled either, according to Moncrieff.

“One problem is the total lack of economic opportunity in the provinces, and the other is citizenship,” he said. “Many people in the country have a feeling of being second-class citizens and being completely marginalised from the political classes in Bangui.”

CAR is mineral-rich, but for decades has been a byword for underdevelopment. The continued violence is deepening poverty in a country where half of the 4.6 million population is already dependent on humanitarian aid.