US President Donald Trump’s executive order, which went into effect on Friday afternoon, has suspended refugee resettlement to the United States for the next four months, blocked entry of Syrian nationals entirely until further notice, and reduced the country’s total refugee admissions for fiscal year 2017 by more than half.

The actions of the new US administration represent a serious setback for efforts by the UN’s refugee agency, UNHCR – along with major international NGOs – to push wealthier states to take in more refugees at a time of record levels of global displacement.

A statement responding to Trump’s order, released jointly on Saturday by UNHCR and the International Organization for Migration, points out that “the needs of refugees and migrants worldwide have never been greater and the US resettlement programme is one of the most important in the world”.

UNHCR estimates that at least 1.2 million refugees are in need of resettlement. This means they’ve exhausted all other options – these people cannot return home for the foreseeable future and have no prospect of integrating in the country hosting them. But the number of refugees currently resettled to third countries represents a tiny fraction of that need. Between January and November 2016, just 115,000 refugees departed for resettlement countries. 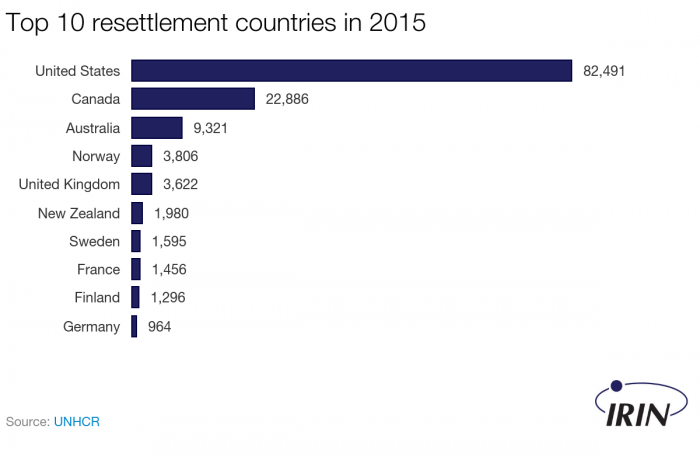 Last year, former UN secretary-general Ban Ki-moon urged states to take in at least 10 percent of the total refugee population (equivalent to about two million people) through resettlement or other legal channels. But the 10-percent target didn’t make it into the final text of a declaration adopted by member states at a September summit in New York, and Trump’s executive order is likely to result in a downward trend in global resettlement numbers.

Currently, around two thirds of the refugees referred for resettlement by UNHCR every year end up in the United States. In the 2016 fiscal year, the country resettled nearly 85,000 refugees and former president Barack Obama had recommended raising that figure to 110,000 in 2017.

According to Trump’s executive order entitled “Protecting the nation from foreign terrorist entry into the United States”, refugee resettlement to the United States this year will be capped at 50,000, around the same level as 10 years ago, when the demand was significantly lower.

Doris Meissner, who heads the US immigration programme at Washington DC-based think tank, the Migration Policy Institute, said the 50,000 figure was established by the Refugee Act of 1980 as a benchmark for admissions. The act authorises the president to exceed that figure based on humanitarian need. In fact, in that same year, the US admitted more than 200,000 refugees, mostly from Vietnam, and there was another spike in numbers during the early 1990s as a result of the conflict in the Balkans.

Meissner described the executive order as a “radical” departure from the long-standing US record on refugee admissions and “a system of values that looks to protect people who are in deep need”.

The 120-day suspension of the programme is intended to allow the State Department and the Department of Homeland Security to review current application and screening procedures to determine if they are sufficient to ensure that those approved for resettlement “do not pose a threat to the security and welfare of the United States”. If deemed necessary, additional screening procedures may be introduced.

The process of applying for resettlement and being screened for admission to the US already takes up to two years. The suspension means that even those refugees who had been approved and were close to boarding a plane will have to sit tight until the review has been completed.

For Syrian refugees, the wait is likely to be even longer. The executive order states that processing of Syrian nationals is to cease entirely, until “sufficient changes have been made to [the US Refugee Admissions Programme] to ensure that admission of Syrian refugees is consistent with the national interest”.

Syrians made up nearly 16 percent of refugee admissions to the United States in 2016 and have been the top nationality submitted by UNHCR for resettlement in recent years.

In a statement reacting to the order on Friday, David Miliband, president and CEO of the International Rescue Committee, noted that refugees entering the country via the resettlement programme already undergo an in-depth process of vetting by 12 to 15 government agencies, making it harder for them to enter the country than by any other route.

“This is one of many reasons to deplore the hasty decision made today,” said Miliband. “In truth, refugees are fleeing terror – they are not terrorists.”

The IRC is one of eight NGOs contracted to assist refugees who arrive in the US via the resettlement programme.

The executive order also suspends for at least 90 days the issuing of visas to nationals and many other people travelling from “countries of particular concern”, which the Department of Homeland Security lists as Syria, Iraq, Iran, Libya, Somalia, Sudan, and Yemen.

Ibrahim al-Assil, a Syrian activist and political analyst who now lives in Washington DC and is seeking asylum in the United States, told IRIN that the visa ban will have negative impacts on members of Syrian civil society trying to work with policymakers in the US.

“It's already been very difficult to get visas for Syrian activists, and that created a gap between the policymakers in the US and Syrian civil society,” he wrote in an email.

“Also, we have students and professionals who will lose the opportunity to continue their studies or conduct their work, and that will be bad for the future of Syria. Without education or work, there will not be anyone who is capable of rebuilding the country.”

Silver lining for some?

The executive order could be good news for one group of refugees. After the suspension is lifted, those fleeing religious persecution could be prioritised if they are part of a religious minority.

Meissner described the minority religion clause as “a way of getting around the Muslim ban”. On the campaign trail, Trump called for a ban on admitting all Muslims to the country, but immigration and security officials pointed out that implementing a ban based on religious affiliation would be practically impossible.

None of the actions outlined in the executive order are unexpected. Trump alluded to all of them during his presidential campaign. In fact, there were fears he might end refugee resettlement to the United States entirely. Meissner noted that the review of the refugee admissions programme over the next four months will likely reveal that it’s already “thorough and rigorous and targeted at [allowing in only] those who don’t represent a danger”.

“If this processing has been taking place in ways many of us believe it has… then this creates a pathway for resuming the programme,” she told IRIN.

Refugee rights advocates can also take heart from the fact that the Obama administration managed to bring more than 25,000 refugees into the country between the start of the fiscal year in October last year and Trump’s inauguration on 20 January. Another 25,000 refugees could be admitted by this October, following the lifting of the suspension.

But while the programme is likely to continue in some form, it will not be the example it has been for the last 40 years to other countries still lagging behind on refugee resettlement.

“It’s not only about numbers but moral leadership,” said Meissner. “That has been the role the US has played in the international protection system.”