This article is part of our in-depth coverage. Read more like this...
Part of an in-depth IRIN series exploring how Iraq's problems of displacement and sectarian division threaten to undermine longer-term peace and stability
DEBAGA CAMP, NEAR ERBIL

Behind a guarded fence at Debaga, dozens of men can be seen whiling away the hours as authorities investigate them for potential links to so-called Islamic State.

All have come to this camp, in the semi-autonomous part of Iraq run by the Kurdish Regional Government (KRG), from places like Hawija, Qayara, and Mosul – territory held by IS or newly liberated towns and cities.

They’re in this detention block because they’ve passed an initial screening by Kurdish forces but their name, or indeed something else – perhaps a comment someone else has made about them – still arouses suspicion.

Fingers curl through the holes of the metal enclosure. Some say they’ve been in this facility for two months and insist there’s nothing to connect them to IS.

“They interrogated us. We passed the process. Why are they separating us from [our] families and detaining us here?” asked 26-year-old Moatez Mohamed Ahmed from Qayara, who told IRIN he’d been inside the site for nearly six weeks. “No one here is answering my questions.”

Melhel Kadayer, 23, said his interrogators asked why he took so long to leave IS-held Hawija. “I said I was afraid of being killed.” 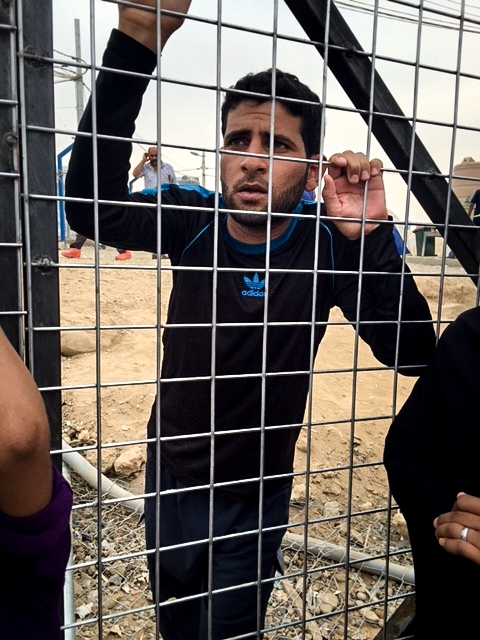 The Mosul offensive has already displaced more than 42,000 people. As the operation to liberate the city intensifies, hundreds of thousands more are expected to follow. All the men and boys over 15 or so have to be screened before they can move on to camps or elsewhere.

Debaga already houses about 30,000 IDPs. There is no official figure for the number detained. It changes every day: new arrivals are brought in, while others are released. Several detainees told IRIN there were more than 100 men inside the special holding area.

So who is conducting this vital screening procedure and how, and is anyone monitoring the process to make sure abuses don’t occur?

Who runs the system?

All IDPs from areas under IS control or recently liberated are first rounded up in collection points known as “mustering sites”.

"They are then transported to initial screening sites, which are relatively close to the frontlines and run – at least officially and depending on location -- by a conglomeration of Iraqi and Kurdish security and intelligence forces."

According to a map seen by IRIN, there are at least 10 of these sites known to international aid agencies, although Nazim Ibrahim Khalaf, a commander in the Popular Mobilization Forces – a loose coalition of mostly Shia militias fighting alongside the Iraqi military – said there were at least 25 across Iraq. This number could not be independently verified.

The UN’s humanitarian assistance mission in Iraq, UNAMI, presented a list of guidelines to the Iraqi authorities before the Mosul offensive about how to engage with civilians during armed conflict. It stipulated that these sites should be in predetermined areas and run by the Iraqi army, or police, not under any circumstances by militia groups like Khalaf’s.

That’s because there have been allegations of serious abuses by the militias – after the liberation of Fallujah, for example, some groups were accused of summary executions and beatings.

Like Fallujah and Ramadi – where post-IS abuses have also been alleged – the population of Mosul is largely Sunni and there’s concern about sectarian reprisals.

Despite these recommendations, Khalaf said his unit is screening men and women on the frontlines.

But because the process is not formalised, groups on the ground interpret screening differently and not always systematically. A western diplomat said the PMF “don’t do screening, they just have names of people they don’t like.”

The UN has also encouraged Shia clerics to issue statements as a moralizing influence for militia fighters, especially. On 22 October Iraq’s most influential Shia cleric Grand Ayatollah Ali al-Sistani called on soldiers and PMF fighters to “exercise the greatest degree of restraint” with civilians in conflict areas.

Upon arrival at the initial screening sites, men and women, along with any children, are separated and patted down. Security personnel then check each name against a raft of different databases of suspected IS members.

“As far as we know, there were some 13 separate security services or agencies each with their own lists of individuals who may have committed crimes or constitute security risks,” Francesco Motta, director of UNAMI’s Human Rights Office, told IRIN.

“But we understand that from the Ramadi campaign onwards, these lists have been consolidated into seven.”

Much remains unclear. How is the information on these lists being corroborated? How are an individual’s supposed ties to IS, or not, actually determined, and which authority or security agency has the final word?

"We have our own procedures and methods, that we don't share," Najmadi Ahmed, a Kurdish intelligence officer who is in charge of security at Debaga, told IRIN.

If someone’s name appears on these lists, they are arrested on the spot.

Problems inevitably arise when a name appears in one list but not on others. A Western official who witnessed this occur on one occasion said: “There were seven of them with laptops, and they sort of looked at each other and asked: ‘Should we detain him?’”

Once cleared, internally displaced people (IDPs) are transferred to camps. Those who still elicit suspicion are investigated further in secondary screening sites, such as the one at Debaga.

In addition to the lists, information given by IDPs is also used to identify who is and who isn’t IS.

“There are lots of good people among [the IDPs]. They are a good source of intelligence for us to find out who ISIS is and who they hurt,” said Said Hajjar, a Kurdish Peshmerga commander.

Hazim Mohamed, who was released after two days from Debaga’s screening site and moved to the main camp, was in a group of 60 men rounded up from the Peshmerga frontline and brought to a screening site. He told IRIN that when it was his turn to be interrogated, he was eager to speak.

“I gave information about those cooperating with IS in my town. I knew them in my neighborhood,” he said. “I gave them five names so they won’t pass the screening process and make it here.” 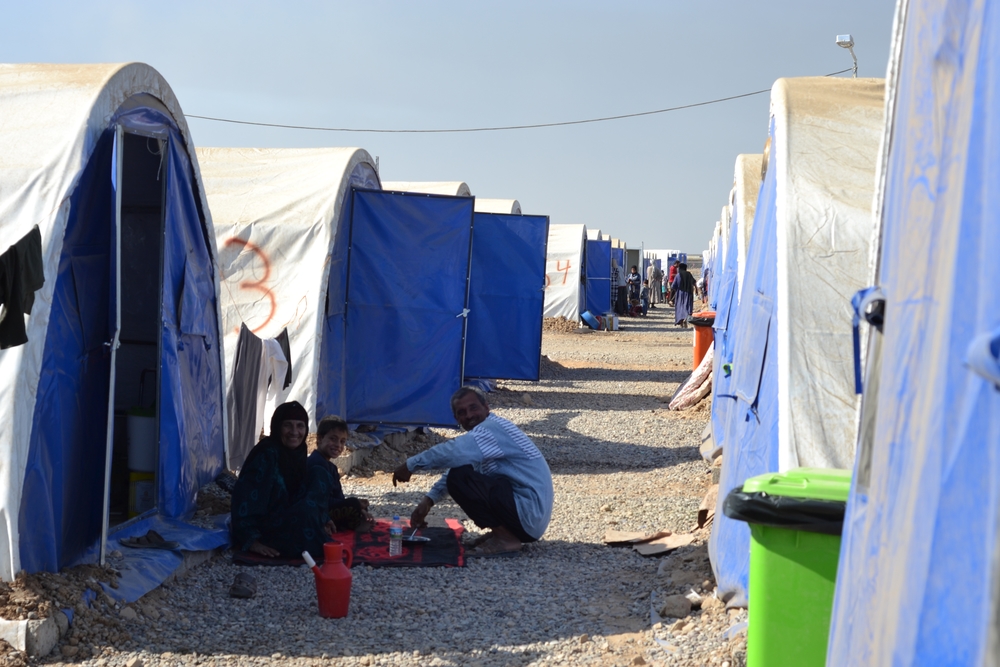 Samya Kullab/IRIN
In Qaraya's Jadah camp, men can only join their families if they have passed a security screening

But relying on the accounts of IDPs also raises the possibility of individuals being named out of revenge or self-interest.

“The authorities invariably act on all such information. But we have discovered some instances where these allegations were motivated by the desire to settle personal disagreements or disputes, sometimes of long standing between families, and were not necessarily based on whether the accused individuals actually was affiliated with or was supporting [IS],” Motta said.

This is what Isra Jasem believes happened to her husband. She hasn’t heard from him in two weeks, since he was detained in Makhmour base shortly after they arrived from Hawija. “Someone told me his name came up on the list, but I know my husband, he had nothing to do with IS,” she told IRIN.

Aid workers and human rights activists have expressed concern that the screening process separates families unnecessarily, and that the authorities reveal little, if anything, about those who have been held, or why.

With ongoing allegations of arbitrary detention, torture and public humiliation, they recommend instituting a more thorough monitoring system to improve transparency at screening and detention sites. But given the fraught situation on the ground as the Mosul operation is in its fourth week, the UN appears more sanguine.

UNAMI’s Human Rights Office has 25 international and local staff reporting on the impact of the Mosul conflict on civilians, including visits to screening centers. But with a limited number of staff and internal security restrictions, it does not have a permanent presence at the sites and can make only sporadic visits.

Currently, the first screening takes between 24 and 72 hours, “which is not great, but still largely complies with the Iraqi criminal procedures’ code,” said Motta.

Monitors ensure detainees have had food and water, and notify their families where they’re being kept. Violations witnessed, such as prolonged arrest without charge, or abuse, are reported internally and then brought up in UNAMI’s discussions with the Iraqi authorities.

Motta said his staff had benefited from unimpeded access so far, but did voice qualified reservations about the process.

“The battlefield is complex and resources are stretched. We have our standard, which we don’t shy away from and which we expect the government of Iraq to respect and implement as a minimum – but setting the bar higher than that minimum, while desirable, is not necessarily realistic in the circumstances,” he said.

“There is really no point asking for a Rolls Royce when the environment you are in only allows for a Volkswagen. As long as the Volkswagen meets the minimum standards, we would be satisfied.”

Back-channel negotiations are also under way to try to introduce more checks and balances.

"We are working very hard to make sure that those who are fleeing are treated with care and dignity with standard procedures and that the process is run by state actors, that it's open to international monitoring," a senior US administration official told journalists.

"We have a team that has been deployed... that will look at protection and legal aid issues for these families as they're deploying,” he added. "There's a lot of emphasis on getting this right."

Karl Schembri, spokesman for the Norwegian Refugee Council, told IRIN his organisation had been lobbying too.

“There should be a civilian force that has observer status in these screening sites to oversee what is going on,” he said.

But while Western powers, human rights activists, and foreign aid workers are unified in calling for independent monitors to be allowed greater access, different parties on the ground are at odds over the matter.

“There should be tribal people, NGOs, some people from the Mosul governorate, so that the screening process is a fair one,” said Abdul Rahman Sultan al-Waqaa, a now displaced member of Mosul’s tribal council.

But the idea was rejected outright by Khalaf, the PMF militia commander.

“When we investigate people, they give us information. Civilians cannot know the information that is being given to us,” he said. “These monitors, we don’t know who they are.”

“This process should be secret and officials should be overseeing it,” he said. “Those who are kept for a long time, its because we don’t have enough information about them and we aren’t sure about them.”

(TOP PHOTO: Men are detained behind the fence of the holding site in Debaga camp. They are visited by their wives and children as they wait for Kurdish security to complete their investigation and clear them of IS links.)