As numbers of new arrivals remain stubbornly high, there is increasingly tough talk from several European countries about ramping up deportations of failed asylum seekers.

Sweden’s interior minister recently said his country was prepared to deport up to half of the 163,000 asylum seekers who arrived in 2015, while Finland said it expected to deport two thirds of its 32,000. Germany, which received by far the largest number of asylum seekers last year, has just approved measures aimed at expediting deportations, particularly of those from countries designated as “safe”.

But the reality is that deportations are hard to do. Even before the current crisis overwhelmed systems in many countries, member states had little success in substantially speeding up returns of failed asylum seekers and irregular migrants.

In 2014, the most recent data available from EuroStat, more than half a million third-country nationals were found to be “illegally present” in the EU. The vast majority were issued with so-called return decisions, ordering them to leave within a prescribed period, usually 30 days. Those who didn’t comply were supposed to be removed by force, but in reality only about 40 percent were.

Frontex, the EU’s border agency, which collates figures from national authorities, reports that member states forcibly returned just over 52,000 irregular migrants in the first three quarters of 2015 (another 57,000 are thought to have left voluntarily). Data on deportations from member states is not broken down by different categories of migrants so it’s impossible to know how many of those were failed asylum seekers. But if you consider that Europe received nearly 800,000 asylum applications during the same time period, you have some idea of the massive scale up required for countries like Sweden to make good on their tough-sounding rhetoric.

What are the rules?

Since the end of 2010, EU rules for sending back irregular migrants have been governed by the EU’s Return Directive (with the exception of the UK and several other countries that opted out). The directive limits the use of detention and coercive measures and generally favours voluntary over forced returns.

Not only are voluntary returns considerably cheaper, they are clearly more humane. But according to the European Asylum Support Office (EASO), there is a dearth of data on voluntary returns, with the exception of the relatively small numbers who leave via formal Assisted Voluntary Return programmes, which provide travel assistance and other incentives and are often facilitated by the International Organization for Migration (IOM) in conjunction with national authorities.

Migrants and failed asylum seekers who decide to leave on their own are not recorded in the Eurodac system – an EU-wide database that registers asylum seekers’ fingerprints when they enter but not when they exit the EU.

“Given their nature, voluntary returns are much more difficult to keep track of since there is no system in place to ensure that failed asylum seekers issued a return decision have effectively left the territory of the member state,” EASO spokesman Jean-Pierre Schembri told IRIN.

“Given their nature, voluntary returns are much more difficult to keep track of since there is no system in place to ensure that failed asylum seekers issued a return decision have effectively left the territory of the member state,” EASO spokesman Jean-Pierre Schembri told IRIN.

In Sweden and Germany, it’s clear that many of those issued with return decisions have little difficulty slipping into the shadows and living for years in the informal economy. Unlike the UK and some other member states, Sweden and Germany have in recent years limited the use of detention as a means of preventing failed asylum seekers from absconding.

Grund Grauselds, a spokeswoman with the Swedish Migration Agency, explained that someone issued with a return order in Sweden has three weeks to leave voluntarily, during which time they have regular meetings with their case officer and receive help getting the necessary travel documents from their embassy. “It does happen quite often that people don’t come to the meetings,” she admitted. “Then we would hand the case over to the police.”

How long does the process take?

While the Swedish Migration Agency is looking into how it can speed up returns, Grauselds said the major obstacle is simply the backlog of asylum applications. “The average processing time at the moment is 11 months, but it will probably increase a lot during this year. It could be as long as 18 months. And then there’s the court process [for those who appeal negative decisions]. There’s a backlog at the courts as well, so that adds another 10 months to the process.”

In other words, someone without grounds for asylum could be in the country for more than two years before any return process is even initiated.

Germany is dealing with its own backlog. Hundreds of thousands of asylum seekers are still waiting to be registered, let alone to receive a decision on their refugee status.

Germany has a decentralised asylum system that places responsibility for both processing asylum requests and implementing return decisions on its 16 states. The country as a whole carried out 20,888 deportations in 2015, double the 2014 number but still not a figure likely to impress Germans concerned by the arrival of more than a million asylum seekers last year. 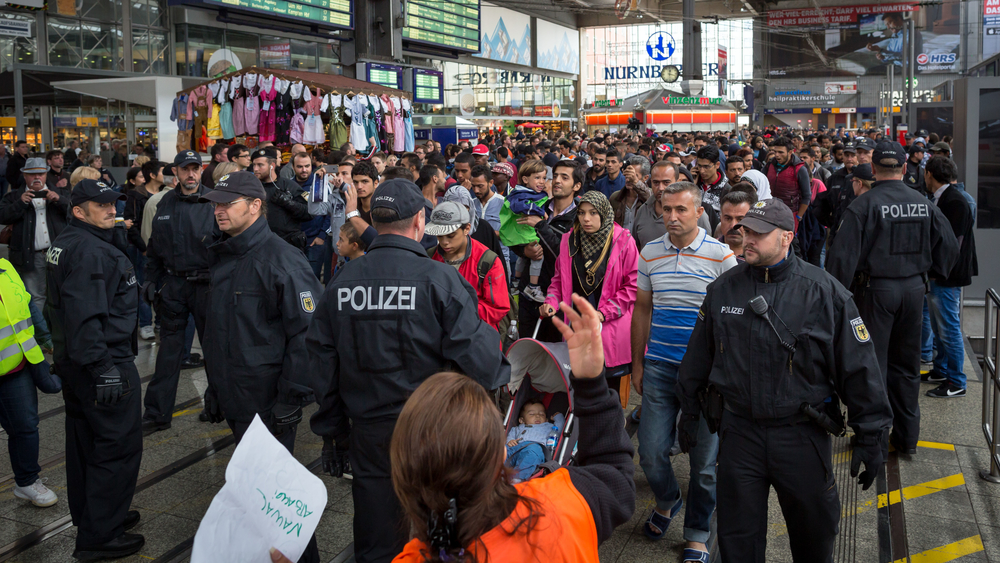 Will there be a crackdown?

Germany is under pressure to significantly increase its deportation rate and refugee rights groups worry that this could result in a return to the more draconian detention and deportation methods of the 1990s.

“It was a very tough policy,” said Karl Kopp, of the German human rights organisation PRO ASYL. “Two people died during the process [of forced return]. Then the regulation was changed not to deport people at any cost and we had a lower deportation rate, but now we’re coming back to the bloody nineties.”

The German government has already taken steps to try to fast-track the rejection and return of certain nationalities of asylum seekers with very low recognition rates. In the first half of 2015, asylum seekers from Balkan countries such as Serbia, Kosovo, and Albania represented 40 percent of all applications. Most Balkan countries are now designated by Germany as ‘safe’, meaning that applicants from those countries can be fast-tracked for rejection and deportation. The government recently added Tunisia, Morocco, and Algeria to its list of safe countries but still lacks the necessary readmission agreements to ensure that returns can actually be carried out.

Since mid-2015, the majority of asylum seekers arriving in Germany and elsewhere in the EU have been from war-torn countries like Syria, Iraq and Afghanistan. Even if Germany rejects a significant portion of Afghan asylum seekers on the basis they are really economic migrants, as it has threatened to do, it will struggle to make the case that Afghanistan is ‘safe’ for returns.

Those denied refugee status in Germany who cannot be returned home for various reasons – because they have serious medical conditions, their nationality cannot be proven, or their country of origin refuses to accept them – join the ranks of the ‘tolerated’, known in German as ‘Duldung’. They cannot be deported but lack residency status and often cannot work or access social services.

When I met Neamat Kanaan, a 30-year-old from Lebanon, in the small Saxon town of Pirna in October last year, she had been in Germany for seven years, most of them on a Duldung permit. She was unable to work or move away from the town where she and her family had endured numerous episodes of racism, and remained dependant on social support. Integration was a virtual impossibility.

Every few years, Germany grants permanent residency to certain categories of Duldung permit holders like Kanaan who have been in the country for years, but the tens of thousands of asylum seekers who will be rejected and prove unreturnable in the next few years are likely to swell their ranks.

“It’s not so easy to kick all these people out,” said Kopp. “People have the right to stay for technical or humanitarian reasons.”