For the thousands of migrants and refugees streaming into Serbia with the hope of entering the European Union via Hungary, the journey ahead is littered with ever more obstacles: from a razor-wire fence and the threat of prison on one side to minefields and mountains on the other.

On Monday afternoon, Hungary completed the first phase of a controversial fence along its 109-mile southern border with Serbia, just as a tranche of new anti-migrant legislation came into effect.

"If someone declares themselves a refugee after having failed to lodge their asylum request in Serbia, their application will be rejected in Hungary, since Serbia is a safe country," said Hungarian Prime Minister Viktor Orbán, confirming that from Tuesday, police would start arresting illegal border-crossers.

Within hours, more than 60 people had already been detained and a state of emergency declared in southern counties to give security forces greater powers.

Orbán’s crackdown effectively closes off the western Balkan route, which has been a hugely popular alternative this year for migrants and refugees – predominantly from Syria, Afghanistan and Iraq – trying to enter the EU without risking the more treacherous sea voyage across the Mediterranean from North Africa.

More than 155,000 people have arrived in Hungary via its border with Serbia this year, according to Frontex, the EU’s border agency.

As the Hungarian government’s draconian position has become clearer, more and more people have tried to beat the deadline. More than 52,000 migrants and refugees crossed the border in August alone. On Monday, 9,000 crossed in a single day and were channelled by authorities through an official border station near the village of Röszke.

Government spokesman Zoltán Kovács said Hungary was fulfilling “all its international and European obligations, including registration," but the UN’s refugee agency, UNHCR, observed that registration of new arrivals was no longer taking place.

"The situation is that after crossing the border these people arrive at the collection point in Röszke, where there is no official procedure," UNHCR spokesman Ernö Simon told IRIN.

"Earlier these people were being taken to the registration points... this is not happening now, but rather, buses are taking people from the collection point to the Röszke train station."

Ahead of the new law’s implementation, it appeared Hungary was keen to move on as many newcomers as possible.

Márk Kékesi, co-founder of the migration solidarity organisation Migszol Szeged, said that every two to three hours on Monday trains with 16 carriages had been chartered to take the migrants directly from Röszke to Hegyeshalom, on the Austrian border.

“Actually what the Hungarian government is doing now is similar to Macedonia and Serbia: letting the refugees pass through the country as quickly as possible,” Kékesi told IRIN.

“It is impossible to fingerprint 5,000 to 7,000 people a day, and the Hungarian government gave up on this some time ago.”

Austria responded by sending troops to its border with Hungary while Germany introduced temporary border checks at its southern border with Austria on Sunday.

Despite tough talk by Orbán, whose declaration of a state of emergency allows him to deploy troops to the border, there are widespread doubts that new laws criminalising the damaging of Hungarian state property, including the border fence, can be enforced.

According to the new legislation, migrants who damage the border fence could face three years in prison, but with nearly 18,000 people currently incarcerated, Hungary’s prison system is already running way over its capacity of 13,356 beds.

Hungary’s armed forces have also been stretched. Some 4,300 troops were deployed to finish building the fence last week, more than 80 percent of the country’s military personnel.

An unnamed Csongrád county police officer told Hungarian newspaper Vasárnapi Hirek on Sunday that “it’s stupid to criminalise refugees: laws are useless if they can’t be enforced. Refugees won’t be locked up by the thousands: I think the strictest sentence will be expulsion from the country.”

For migrants wanting to avoid the risk of prison or expulsion back to Serbia, the alternatives are no better. The obvious route would be through Croatia into Hungary via its western border – which currently lacks a fence – or straight into Slovenia. But Slovenia’s terrain is mountainous and Croatia’s border with Serbia is strewn with thousands of landmines left over from Croatia’s War of Independence in the early 1990s. More than 500 people have been killed by landmines in the last 20 years in Croatia, which plans to clear all its suspected minefields only by 2019.

Syrian refugees discussed the dangers of the Croatian route on the 113,000-member Facebook group "The Stations of the Forced Wanderers" on Monday evening. One man, who said he would be leading a group of refugees through Croatia, warned that “on the border with Serbia, there are minefields that are a consequence of the Civil War, and which are still there.”

Refugees cram into a bus that will take them from an interim reception centre in Kanjiza, northern S 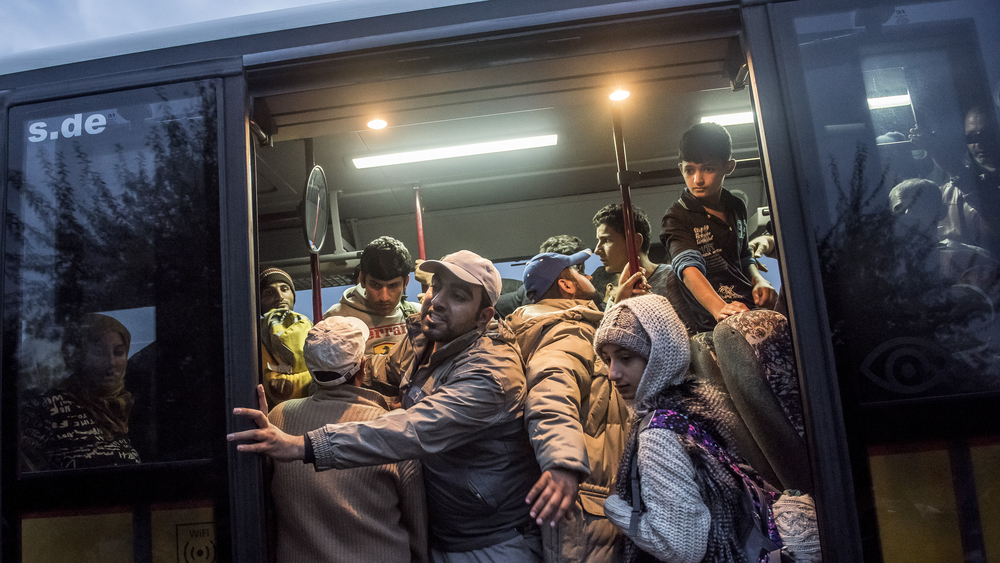 For now the fence consists only of a coil of razor wire and many of the hundreds of migrants waiting at a temporary reception centre in Kanzija, in northern Serbia, said it would not affect their travel plans.

Géza, a border police officer at Röszke told IRIN that he expected the migrants to keep coming, despite the new measures. “The fence won’t make any difference: the migrants will still come here because Slovenia has too many mountains and Croatia is still full of landmines from the Yugoslav War.

“Refugees will want to travel through Hungary to other countries, no matter what, so we will have no choice but to use force; if not us, then the army. There will be clashes, it’s inevitable,” he said.