Around 7am on an August morning in 2006, the doors of Action Against Hunger's compound in Sri Lanka swung open. Startled, the 17 aid workers were lined up against a wall. If they protested that they were providing assistance to all sides, regardless of politics, it made no difference. One by one, all 17 were executed: shot in the head. Many were still wearing t-shirts embroidered with the ACF logo.

Across the globe, attacks on aid workers are a major problem. In 2004, there were 63 attacks affecting 125 people. By last year, those numbers had nearly trebled to 190 and 329, according to the Aid Workers Security Database.

Prosecutions of those responsible are few and far between. No official statistics exist, but all the experts IRIN spoke to agreed that the number of investigations into aid worker attacks that result in conviction is negligible.

The murderers of those 17 Action Against Hunger (ACF) staff have never seen their day in court. A number of reports have implicated government security forces, but an official inquiry remains open.

"There is a culture of immunity," said Pauline Chetcuti, humanitarian advocacy advisor at ACF.

Last year, shortly after World Humanitarian Day – commemorated annually on 19 August – the United Nations Security Council adopted a resolution condemning all attacks on aid workers and calling on all parties to allow humanitarians full access to those in need.

But there are, critics say, few mechanisms for the UN to actually enforce such protection. Responsibility falls mainly upon individual states and their judiciaries, many of whom have a poor record of taking action.

The impacts of such attacks go far beyond the aid workers themselves. Millions of people living under the so-called Islamic State in Syria and Iraq, for example, get very little international assistance because of the threat to aid workers.

Even in less extreme circumstances, with governments that claim to respect international law, there is often a blatant disregard for the lives of aid workers. Many humanitarians fear they are easy targets for those trying to send a message – safe in the knowledge that the chances of prosecution are slim.

To counter this, ACF has suggested a simple idea that could, in theory, have a major impact. Its forthcoming campaign, due to be launched next month, will call on the UN Secretary-General to create a new position, something like a "Special Representative for Strengthening the Protection of Aid Workers," according to Chetcuti.

The role – like that of other UN Special Representatives who already pressure governments and armed groups on a variety of important causes – would involve travelling around the globe trying to convince those that threaten aid workers to respect their independence. The work of Special Representative for Children and Armed Conflict Leila Zerrougui is often cited as a good example of a principled campaigner who has been able to focus minds on a single issue.

So what's the problem?

First and foremost, there's the issue of overlap. Emergency Relief Coordinator (ERC) Stephen O'Brien, the world's most senior humanitarian, is in theory meant to do this already.

Ashley Jackson, research associate at the Overseas Development Institute, told IRIN she was concerned it would mean just another bureaucrat. "I see an overlap with so many other roles. The (UN) High Commissioner for Human Rights does a lot of work on this, UNOCHA (the UN's emergency aid coordination body) does a lot of work on this. So what is the value added of an extra UN position devoted to this?"

One UN insider said there was little appetite to take the proposal seriously, especially with so many global crises and resources overstretched.

But while it is true that O'Brien is supposed to push for accountability for aid workers who are killed, this is only one of his many responsibilities. In fact, some question whether his fundamental role of getting help to those in need doesn't prevent him from taking a harder line on the issue.

Friends, family and colleagues of aid workers killed in the course of humanitarian work lay a rose w 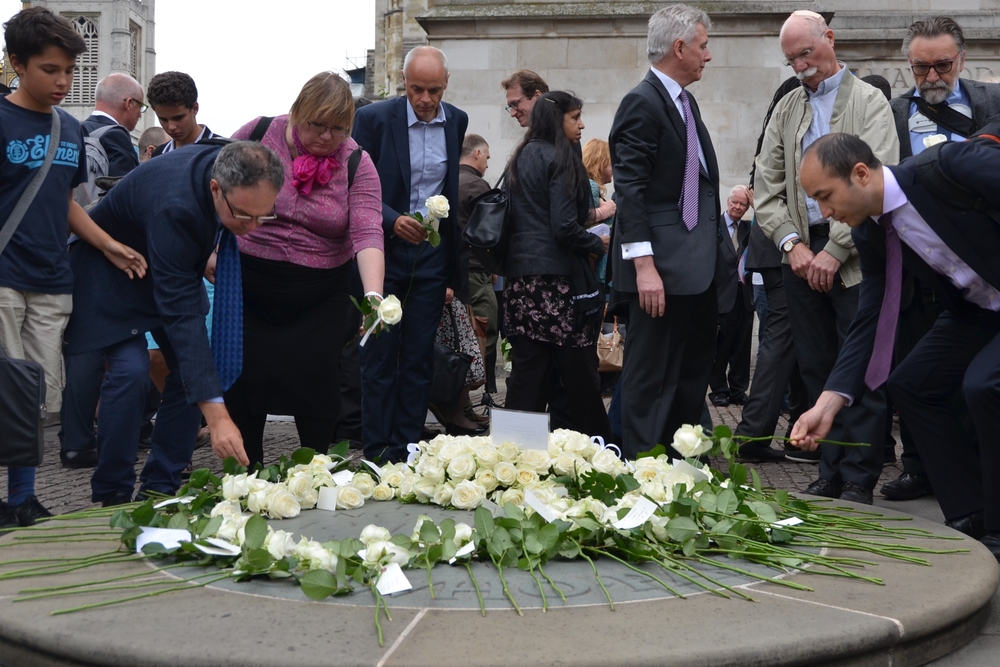 "The problem of the ERC is his main purpose is to get access," said Marco Sassoli, a professor of international law who specialises in humanitarian issues at the University of Geneva. "If you criticise people and name and shame them, then you get even more problems, or your people will be killed."

"Such a special representative has no staff on the ground. So he or she has only one purpose – to denounce violations against humanitarian actors."

The creation of such a Special Representative also touches upon a sensitive subject in the humanitarian community: should aid workers be given 'special' protection that other civilians don't have?

While employees of the UN and the International Committee of the Red Cross (ICRC) benefit from some additional protection under international law, NGO workers do not.

"Protecting aid workers falls very squarely under the mandate of protecting civilians," Jackson argued. "To make the case that they are some kind of special entity, I don't know that is the best use of our energy."

But Professor Sassoli said that appointing a Special Representative wouldn't be a case of elevating aid workers to a higher status, rather it would be giving a vulnerable group an additional advocate. It is a valid point that children, for example, are civilians, but they still have their own Special Representative.

Jackson suggested that for any Special Representative to be really effective at meeting with armed groups and challenging them, perhaps the position shouldn't be tied to the United Nations at all.

But for Sassoli, the number of aid worker deaths itself is enough to demand some kind of radical change. "Even if we had an official 'UN list' with humanitarian workers killed every year and some efforts by such an independent mechanism to attribute those killings or arrests, it would have an impact."