As ceasefires go, the latest one in Yemen might go down as one of the most irrelevant ever. It was supposed to be in place for 10 days but, depending on who you ask, it lasted for somewhere between 30 seconds and two hours.

A Saudi Arabian-led coalition has been bombing the Houthis to try to return Hadi to power, but new groups have risen to prominence on both sides with only loose loyalties and distinct local agendas. Convincing them to agree to any peace deal will only get harder with time.

The conflict has morphed into a "many-headed beast," said Adam Baron, a visiting fellow specialising on Yemen at the European Council on Foreign Relations.

"We are looking at the complete militiafication of Yemen,” he added. “It took Syria two to three years to reach this point. Yemen has done it in a few months."

The humanitarian ceasefire, which was meant to come into force at midnight on 10 July, was similar in principle to a largely successful five-day truce in May that enabled desperately needed humanitarian aid to enter the warring country.

The UN was again confident the major players were backing the truce. The Houthis and Hadi had both given assurances, according to UN Secretary General Ban Ki-Moon.

But, according to multiple sources on the ground, fighting in several southern Yemeni cities barely stopped, even for a moment. Within two hours, bombs were again falling on Sana’a and other cities.

Responsibility for the failure is disputed. Mohammed al-Bukhaiti, a member of the Houthis' political council, accused Saudi Arabia of responsibility, saying the UN was colluding with Riyadh.

The UN, for its part, said Hadi's government had committed to the truce. Saudi Arabia, however, denied that Hadi had asked them to stop the bombing campaign.

Farea al-Muslimi, a Yemeni visiting scholar at the Carnegie Middle East Center, said the truce was largely agreed to because no one party wanted to shoulder the blame for publicly rejecting it.

“All sides wanted to avoid responsibility for saying no, so they said yes but didn’t [commit to it].”

Either way, the failure leaves the credibility of UN envoy Ismail Ould Cheikh Ahmed in jeopardy.

“The UN comes out of this with its credibility very damaged. It appears that miscommunication related to the finalisation of details related to the ceasefire was at the heart of its collapse,” said Baron.

It also shows that the war is splintering. As the number of fighting groups proliferate, so a comprehensive peace deal becomes harder to envisage. Even before the war, successive Yemeni governments in Sana’a only had nominal control over large parts of the country.

“There has been a loss of control and command. Even if all sides wanted to stop, it would be harder to implement. The war has established itself as a business cycle,” Muslimi said.

Three Yemenis sit outside destroyed homes, shortly after an airstrike by the Saudi Arabian-led coalition. The attack came a day after a humanitarian truce failed to take hold. 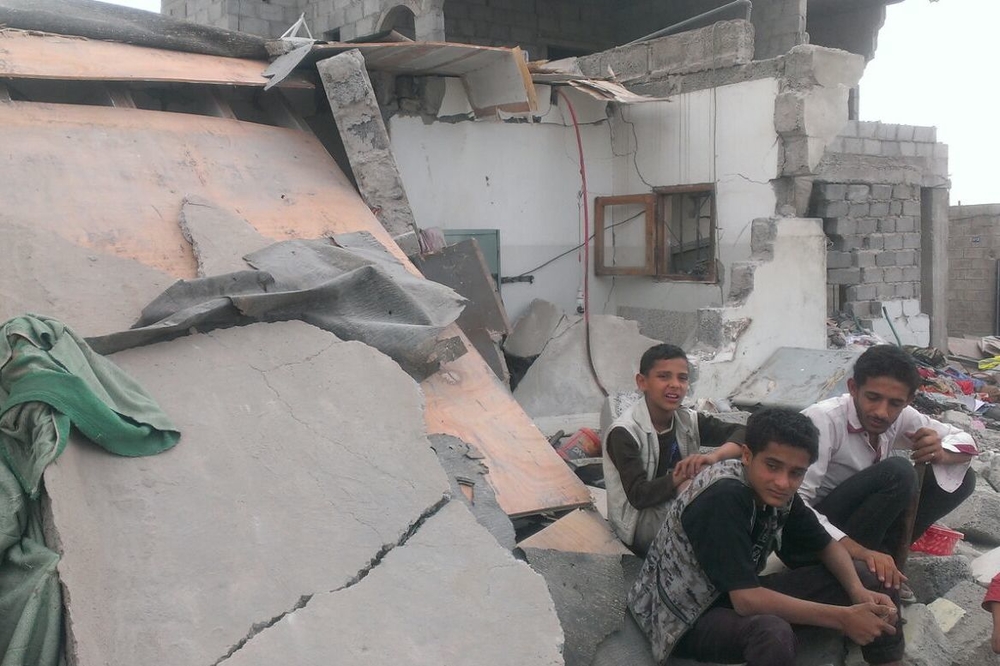 Fernando Carvajal, Yemen analyst at the University of Exeter in the UK, pointed out that the first group to publicly reject the ceasefire were the Southern Movement (Al-Hirak al-Janoubi), based in southern Yemen and only loosely aligned to deposed President Hadi against the Houthis. They were not involved in negotiations between the Saudis, the Houthis and other parties, so they announced a day before the deal went into force that they would not respect the agreement.

“Saudi has armed a number of groups that are neither loyal to President Hadi or in line with Saudi interests, beyond the Houthi withdrawal from the South,” he said. “Each group is fighting for their own interests, which do not include Hadi’s return to Yemen.”

The peace negotiations between the Houthis and the Saudis have also largely excluded former president Ali Abdallah Saleh, who has allied with the Houthis and controls part of the military. This has made him less willing to cease fighting, Carvajal added.

In the absence of constructive talks, both Al-Qaeda in the Arabian Peninsula and the Islamic State have made inroads during the war. Likewise, tribal groups are increasingly following local agendas, especially as they are excluded from negotiations.

For the average Yemeni, the price is rising.

Mohammed Hasan, 28, was staying with his family when the Saudi warplanes targeted their neighborhood two hours after the ceasefire was due to begin.

“There is no army brigade or military institution in our neighborhood or around it to be targeted, and at the same time they cannot say it was a mistake because they shelled us with four missiles not one,” he said.

Nearby, Um Mohammed Qaied, 45, went to the market to buy some clothes for her four children who were preparing for the Eid festival. When she arrived she found them all dead. She was too devastated to talk.

Muslimi said the best hopes for a resolution would be regional rather than local negotiations. The Houthis are loosely aligned with Iran, while Hadi takes his lead from Saudi Arabia.

“The only way is to stop the flow of the funds to them, and that requires a regional deal between Saudi and Iran,” he said. “It is like their umbilical cord, if you cut them they will have less food.”

Iran’s nuclear deal with the United States could, he added, have a significant impact – though it was not yet clear how it would alter relations between Riyadh and Tehran.

"The Saudis, the Omanis and the Emiratis are eager to avoid a collapsed state on their border,” Baron added. “This may provide some impetus for a solution. But it is very easy to start a war, far harder to end it."