Actual combat may have ended almost a decade ago in northern Uganda, but for many women abducted by the rebel Lord’s Resistance Army and the children they conceived in captivity, the war is far from over. Sexual exploitation, beatings, stigmatization and community rejection, lack of medical care and education, and deprivation of land rights are among the challenges faced by those who escaped from or were released by the LRA.

For two decades from the mid-1980s, between 10,000 and 15,000 girls and women were abducted from their homes in northern Uganda to serve as fighters, porters and sex slaves of LRA commanders. These forced unions resulted in a population group often neglected by post-war recovery programmes: children born of war.

According to a recent article published by the International Centre for Transitional Justice (ICTJ), “Thousands of such children exist on the margins, fathered through sexual violence by not only the LRA, but also government forces and a multitude of other state and non-state armed actors.”

A new report by the Justice and Reconciliation Project, based in the northern town of Gulu, points out that scores more women were subjected to sexual violence and exploitations in the so-called “protected villages” where most of the population of northern Uganda was forced to live during the war.

“As if the original violations were not severe enough, female victims are especially susceptible to ongoing forms of re-victimisation that extend long after initial violations occur,” says the report, titled, “Alone Like a Tree: Reintegration Challenges Facing Children Born of War [CBW] and Their Mothers in Northern Uganda.”

The members of Awach tailoring group, Gulu district. The group is of mothers of children born out of war and other conflict related 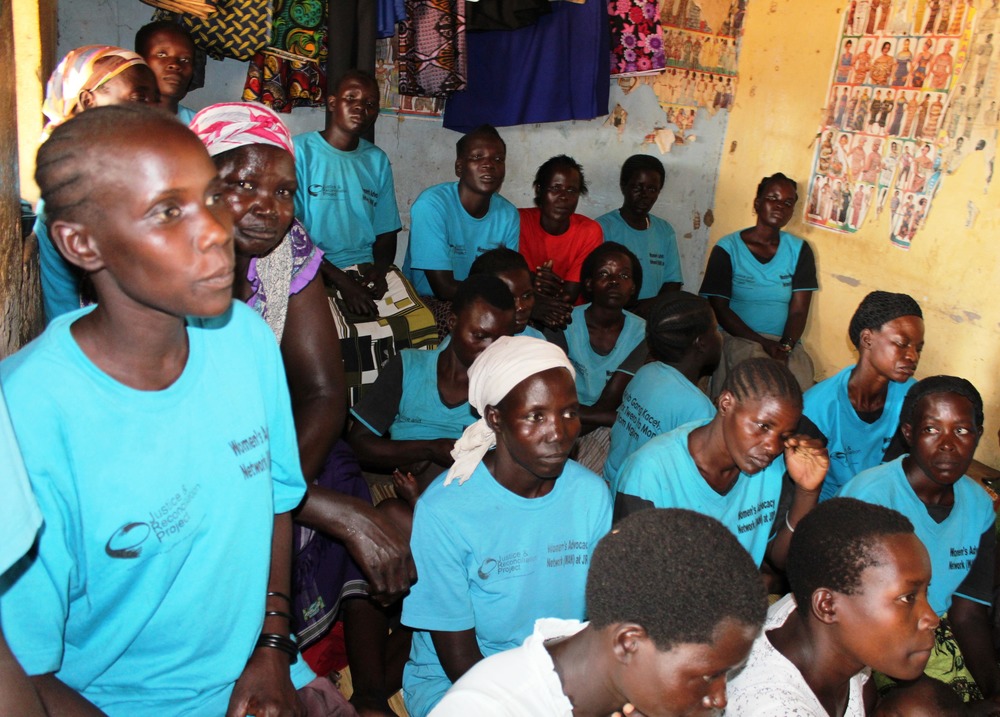 The consequences for the women of protracted stigmatisation can include depression and other forms of mental illness as well as increased vulnerability to future abuse and violence due to economic marginalisation.

Women interviewed by the report’s authors said their new partners often “do not want to pay their [children’s] school fees, and the step-parents are reportedly a major source of insults against CBW. They are continuously ostracised and isolated in some homes.”

Interviewees also reported many cases of sexual abuse of both female and male CBW by stepfathers and other relatives. Reporting such abuse was very difficult, especially when the perpetrators were members of the armed forces.

“In the new relationships, the slightest disagreement between husband and wife gets blamed on the women’s past. Even when the man is also formerly-abducted, he can stigmatize the woman, accusing her of sleeping with many men from the bush as a means of justifying his abuse,” says the report.

One 17-year-old boy born in LRA captivity told the researchers: “We are sometimes told the home we are staying in is not our home, and the person taking care of us is not our father. That we should go and look for our father. This is always said by other children in that home. This makes our lives miserable.”

According to Jackson Odong of the National Memory and Documentation Centre in the northern Ugandan town of Kitgum, the needs of such populations have been neglected.

“Children born in captivity and their mothers continue to suffer because while they were encouraged to return, there was limited support for their reintegration. Focus was largely on ex-combatants. There have been little or no specific interventions targeting surviving children and mothers,” he said.

Irene Ikomu, a human rights lawyer and the coordinator of Parliament Watch Uganda, told IRIN that the report highlighted the need to evaluate current reintegration processes in northern Uganda. “There are clearly gaps that are yet to be addressed and this explains the continued challenges despite peace,” she said.

“Successful reintegration is not just about short-term concerns and political stability, but should especially focus on the long-term strategies for economic reconstruction and development,” added Ikomu.

“In northern Uganda, we cannot say we have fully addressed reintegration without dealing with the issue of land access for the former combatants and victims, especially with regard to CBW,” she said.

“It’s a serious issue. If not addressed urgently, it’s recipe for violence and conflict. As a commission, we haven’t done proper reintegration of these people because we are incapacitated. We don’t have the resources due to low government funding,” he told IRIN, explaining that only around US$1.5 million of the $2.5 million budgeted for reintegration programmes annually had been forthcoming.

“We need to carry out community sensitization, dialogues and reconciliation meetings to create an atmosphere for the community members to fully accept and live peacefully with these children and women,” he added.

The ICTJ article noted that while rebels who surrendered “were awarded reinsertion packages of basic household items by the government, there were no additional allowances for those with children born in captivity. This trend continues today, with many governmental and non-governmental programmes recognizing formerly-abducted persons as a special category for assistance, but not children born of war.”

Even within this category, different groups have different needs, the article explained.

“For instance, female and male children will face different challenges in societies in which females’ families receive dowry when their daughter marries while males are expected to inherit land and other resources when they come of age. In northern Uganda, some families and clans have rejected male children born of war to a higher extent than females because they do not want to allocate land to them on which to settle when they come of age.”

In March 2014, the Women’s Advocacy Network, a coalition of various groups, including some made up of mothers of CBW, petitioned parliament to set up a gender-sensitive reparations fund to provide free health services to women and children affected by the insurgency, and a mechanism to “identify, integrate, and regularize stateless children born in captivity.” The network also called on the government to “identify, integrate, and resettle child victims of formerly-abducted women whose clan/cultural belongings are unknown.”

While parliament did pass a resolution, it has yet to bear fruit.