A new report analysing the aid response to Cyclone Pam has once again found international agencies guilty of failing to co-ordinate effectively with local and national actors.

One size doesn’t fit all, produced by CARE, World Vision, Oxfam Australia and Save the Children Australia, notes how in the aftermath of the cyclone, scores of international NGOs “flooded” into Vanuatu - “many with no established relationships and minimal knowledge of national actors and institutions”.

Although the report acknowledges “a lot of positives” in the Cyclone Pam response - such as the ability of the Ni-Vanuatu people to quickly rebuild their homes and government authorities working around the clock to get things done in the face of enormous logistical constraints – it also highlights several issues.

These included: community readiness to mitigate the impact of a large-scale disaster; whether the “the influx” of international agencies and humanitarian response systems was “appropriate”; and how international response can be better tailored to support, without overwhelming or pushing aside, national actors.

Except from One Size Doesn’t Fit All: Tailoring the International Response to the National Need Following Vanuatu’s Cyclone Pam - an NGO report published June 2015 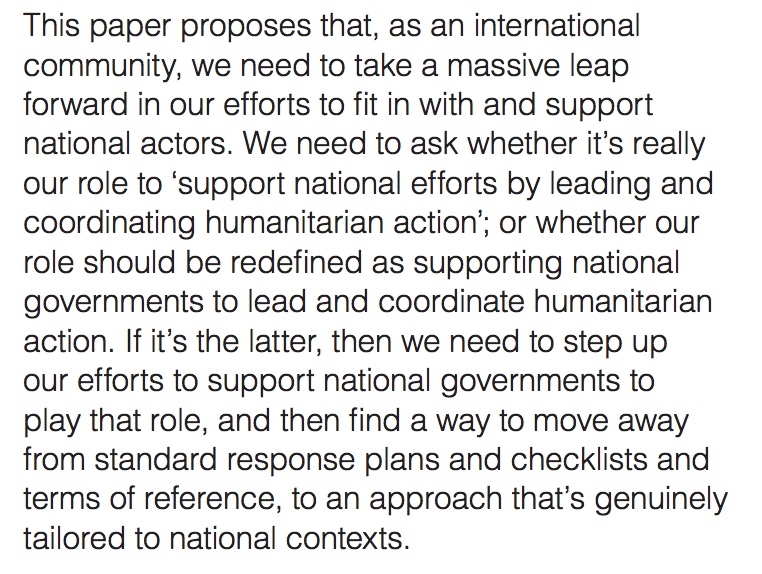 If this all sounds rather familiar, that’s because it is.

Here's a taste of IRIN's coverage of such lessons supposedly learnt:

Indeed in the days after Cyclone Pam, the Vanuatu government complained about how international aid organisations had complicated the response by not co-ordinating with local teams.

Christina Bennett, a Humanitarian Policy Group (HPG) researcher at London’s Overseas Development Institute (ODI), told IRIN: “We hear these complaints over and over and over again, but the behaviour of international aid agencies remains unchanged .”

And she asked: “How much longer are we going to talk about this without really making a change?”

One size doesn’t fit all was published as a contribution to the Pacific Regional Consultation for the World Humanitarian Summit (WHS) which has been taking place this week in New Zealand.

For the last few days the great and the good of the aid world have been tweeting via the hashtag #ReShapeAid lots of positive dictums about listening more to communities, localising aid and learning lessons.

No-one can disagree with what’s being said, but we are wondering when the the talk turn into action?