In the shadow of Greece’s bitter row with creditors, the refugee crisis unfolding in its islands has been pushed from the headlines, but boats carrying migrants and asylum seekers continue to arrive and systems for receiving them have virtually collapsed.

Outside the Mersinidi identification centre on the island of Chios, migrants are hanging their clothes out to dry on trees and bushes following an early morning storm. They are mostly families with small children that arrived the evening before.

“There is no place to stay here; there is not even water in the toilet,” says Ennes, a 35-year-old Syrian from Aleppo, pointing to a makeshift camp set up some weeks ago by local authorities to host the overflow from the identification centre.

Ennes worked in Turkey for a year before deciding to try for Europe. His plan is to cross to Greece’s mainland and then travel through the western Balkans to reach northern Europe. The vast majority of people arriving on the Greek islands share the same aim. But to cross to the mainland and traverse the country without being arrested they first need to be fingerprinted and issued with a document from the Greek authorities - a six-month residence permit for Syrians or, in the case of those from other countries, an expulsion notice that gives them one month to leave the country.

The UN’s refugee agency, UNHCR, estimates that 68,000 migrants and asylum seekers have arrived by boat to the Greek islands since the beginning of the year – an increase of 560 percent compared to 2014 – and slightly above sea arrivals to Italy during the same period About 60 percent of the new arrivals are Syrians. A government official told IRIN that more than 200,000 migrants are expected to arrive in Greece by the end of the year.

Reception facilities on the islands are woefully inadequate for such numbers and the current financial crisis means the resources and personnel needed to improve them are simply unavailable. A recent fact-finding mission to the islands by Amnesty International described conditions as “appalling” and noted that poor planning, ineffective use of EU funds and a hiring freeze had left Greek authorities incapable of meeting the needs and protecting the rights of asylum seekers.

“The majority of new arrivals have limited or no access to medical or humanitarian support and are often forced to stay in squalid conditions in overcrowded detention centres or open camps,” said John Dalhuisen, Amnesty International’s Director for Europe and Central Asia.

Just two mobile reception units to determine the nationality of new arrivals and provide them with basic medical and humanitarian assistance, are running on the islands of Samos and Lesvos while former detention centres on Samos, Levos and Chios, now called identification centres, are full to overflowing.

UNHCR Greece spokesperson Ketty Kehayioylou confirmed that conditions at the centres were  overcrowded and that local police and coast guards, while doing their best, were over-stretched and struggling to process so many new arrivals.

The resulting backlog means that migrants often have to wait for more than a week in makeshift camps like the one on Chios before being issued with the documents they need to move on.

Migrants gather outside the identification centre at Moria on Greece's Lesvos Island to hear the names of the lucky few who will be accommodated inside. The rest will have to sleep in a makeshift camp outside. 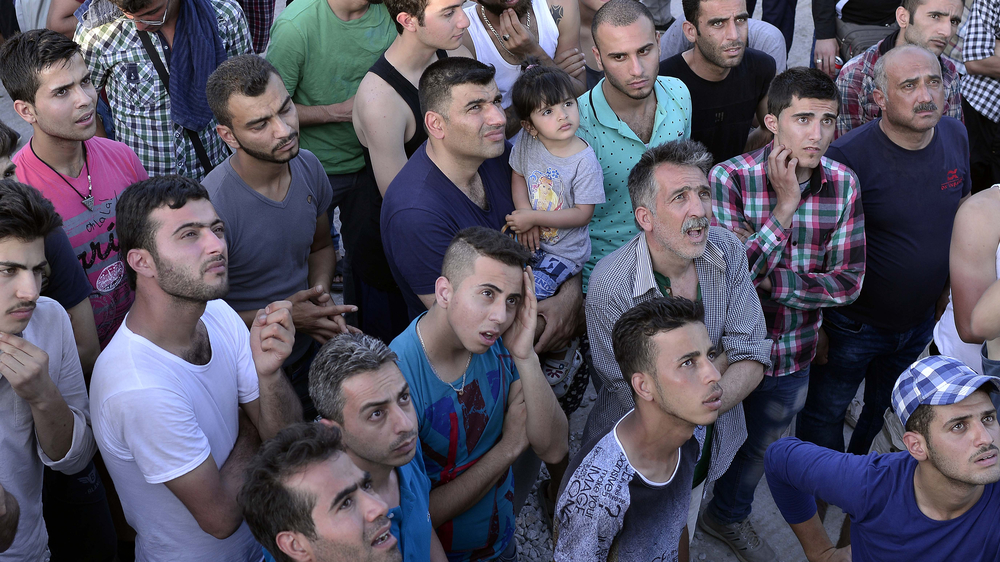 As conditions at the camps worsen, tensions are building between different groups of migrants and between the migrants and local communities.

Scuffles have erupted between Syrians and Afghans staying at an overflow camp set up by authorities near Mytilene, the main town on Lesvos Island. In Mytilene, a group of Syrians recently engaged in a standoff with the coast guard, after being ordered to relocate to the island’s former detention centre in Moria for processing. The Syrians gathered in the port demanding direct access to the Greek mainland so they could continue their journeys.

The day afterwards another scuffle left a Syrian with a head injury and a police officer with a wound to his face. Agitated by the violence, some of the islands’ residents are threatening to take action against the foreigners themselves. Among them, some spout racist rhetoric and in the last two weeks web posts accusing the migrants of desecrating churches and religious items have been circulating. The local priest has denied the claims of vandalism.

UNHCR is increasing its presence on the islands and its humanitarian response by providing relief items such as sleeping bags and mattresses, as well as legal counselling. The agency is also advocating for legislative amendments that would decriminalize the transporting of refugees and spare them from having to walk about 70 km from the northern shores of Lesvos to Moria.

Greece depends heavily on EU funding to manage migration, control its borders and support its asylum system. Through the Asylum, Migration and Integration Fund, established last year, it is set to receive nearly US$290 million in EU funding between 2014 and 2020. Another $187 million in EU funding has been allocated for securing Greece’s borders during the same period.

The possibility of Greece’s exit from the eurozone and, if it came to it, from the EU, would jeopardize those funds as well as a hard-won agreement reached in Brussels last week for other member states to take in 40,000 of the asylum seekers that have arrived in Greece and Italy over the next two years.