Through 17 months of conflict, tens of thousands of people have been killed in South Sudan and two million more displaced. Schools, health centres and markets have been looted and destroyed. It took a $1.8 billion humanitarian response last year for the country to avoid a famine.

And it’s about to get even worse.

At the same time, economists are warning that the combination of conflict and a global downturn in oil prices – the country’s main source of revenue – has brought South Sudan’s economy to the brink of collapse. Skyrocketing costs and a tanking currency are especially threatening to urban communities where people must buy most of their food. Some can already not afford to eat.

“All of this means a crisis is arriving very, very quickly,” said Shaun Hughes, the head of programme for the World Food Programme in South Sudan – and on a scale the already suffering country has not yet seen.

Ramsey Bol Lang is twice displaced. In December 2013, the 20-year-old was going to secondary school in Juba when fighting broke out. His neighborhood, on the capital’s outskirts, was the scene of door-to-door killings allegedly perpetrated by troops loyal to President Salva Kiir.

Three days later, Lang took advantage of a lull in the shooting to flee across the city. Though the fighting in the capital ended as rebel soldiers backing former vice president Riek Machar retreated into the country’s northeast, Lang decided it wasn’t safe to return to his home and rented a new place.

Months later, his mother, seven siblings and two cousins arrived in Juba to live with him. There had been protracted fighting near their home in northern Unity state and a brother and an uncle had been killed. Lang’s father had decided it was best to send the rest of the family to Juba. 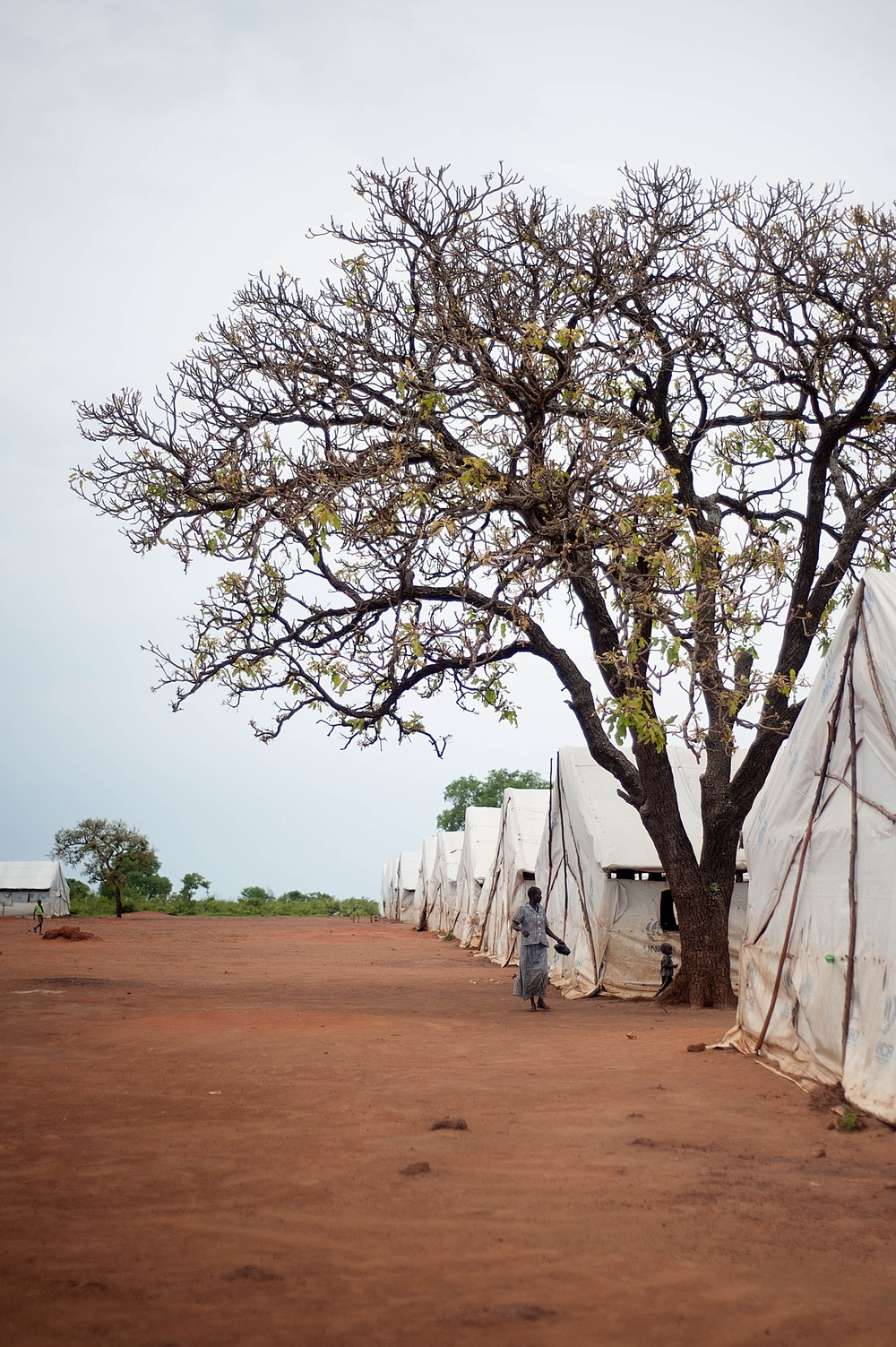 Except now, a steep rise in prices means they can longer afford to live in the capital. “Everything has become expensive there,” Lang said. “If you want to rent a home, even, it’s too expensive.” Which is why, in late April, they gathered their belongings and hired a minibus for the hour-and-a-half drive to the Ugandan border. They were met by officials from the UN Refugee Agency (UNHCR), who then took them on to a transit camp. Within a few weeks, they will be permanently resettled in Uganda.

Lang did not want to see his family become refugees. “That is our homeland,” he said, pointing to South Sudan, its border with Uganda visible from the Nyumanzi Transit Camp. “I don’t have a home here.” But at least he will have something to eat.

To stay in Juba was financially impossible. And to move back to the family’s village in Unity state’s Pariang County meant dealing with food shortages, in addition to the threat of violence. In the newly released Integrated Food Security Phase Classification (IPC), which measures food security and nutrition, Pariang is predicted to reach “crisis” level as early as this month. And a cluster of counties to its south will likely hit the “emergency” threshold before the end of July – one level below famine. “The situation of Juba right now, all over South Sudan, even, it is not good for us,” Lang said.

Draku Godfrey Uhuru is the centre supervisor at Nyumanzi. Over the past few weeks, officials have been registering an average of 70 new arrivals to the camp each day. A month ago it was only 30 or 40.

Uhuru said most of the new refugees have fled from fighting in Unity and Upper Nile states. But for the first time, a noticeable number are not on the run from recent battles. Instead, they tell Uhuru, “It is hunger that is now attacking them.”

The figures in the new IPC report are jarring. Nearly 70 percent of the country will not get enough to eat through July. At least 80 percent of the counties across the country’s north are at a critical level of malnutrition, which is particularly dangerous for pregnant women and children. And the report does not even fully account for the people who might be in the worst position of all – stuck in the midst of ongoing fighting in Unity and Upper Nile states. Until the clashes stop, it is impossible for humanitarians to reach them – or even gauge the extent of their need.

A steep rise in prices means many can no longer afford to live in the capital.

WFP’s Hughes said the current situation was sadly predictable. In the early days of the conflict, if South Sudanese did not have enough to eat, they could sell livestock or barter supplies for food. “As the crisis goes on, those coping strategies become increasingly depleted,” he said. “They have nothing left to rely on, no assets left to sell.”

With the arrival of the lean season – the months when people are planting for August and September harvests – South Sudanese would usually supplement what food they were able to store from the previous year with goods from the markets. Except tens of thousands of people were unable to plant last year because of the fighting. And prices in the market – where markets even still exist – have shot up.

Barack Kinanga, the International Rescue Committee’s economic recovery and development coordinator, has seen the price for maize in some parts of the country surge 70 percent higher than it was at the same time last year. And he warns, “The prices are likely to rise further and even peak at unprecedented levels.”

The search for food is driving people across borders, he said. UNHCR has recorded more than 9,000  new arrivals in both Sudan and Ethiopia over the past month. Uganda received around 7,000 South Sudanese in May – the most of any month this year.

Nyankuch Akuma is one of them. Her husband, a soldier, was shot and killed and she was left on her own outside Bentiu, the capital of Unity state. “It was so bad. Up to now there was no planting,” which is why she decided to leave and travel to Uganda. Even before she was placed in a permanent settlement, Akuma had decided, “I will stay here forever.”


South Sudan’s unprecedented level of hunger is the most alarming signal of the country’s larger economic collapse. South Sudan’s currency, the pound, is trading in Juba’s black markets at nine and a half to every dollar – less than half of its value a year ago. Fuel is scarce. And the casual jobs that many people rely on for income are disappearing as the currency depreciates.

It is against that backdrop that the food insecurity has spread beyond the country’s northeast. The rest of the country also depends on markets during the lean season, Kinanga said, and “steepening commodity prices are having a far-reaching effect for the communities not directly affected by the conflict.” 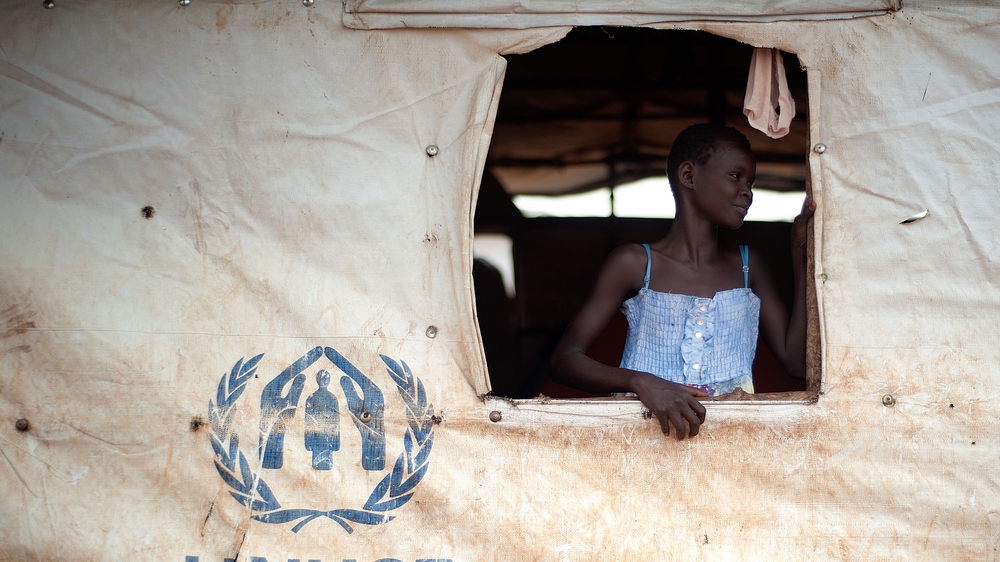 This includes as many as 600,000 people living in urban areas. And a sudden rise in food insecurity in towns will force overstretched humanitarian agencies – now largely focused on rural communities – to recalibrate their response.

The fighting is the obvious culprit for the country’s economic spiral, said Dr. Kenyi Spencer, a South Sudanese economist. The government is spending much-needed reserves on “the war, hardware, this and that. It has displaced the local economy.” And with long-term consequences.

“There is a real risk the economic choices the government is making now will destabilize the country for generations to come,” said Emma Vickers, a campaigner with the corruption watchdog group, Global Witness. “If, when the conflict ends, there is no money left for infrastructure projects, education or job creation, South Sudan faces a future where the only choice for its youth is to pick up arms again.”

At the same time, the country’s oil fields have suffered repeated attacks, forcing production cuts that the country – which is almost completely dependent on revenue from oil sales – can ill afford. And international conditions – including a strengthening dollar and a global drop in oil prices – are hastening South Sudan’s economic collapse, Spencer said. “All these have really arrived to put the economy in a bad place right now. In the next two to three weeks, if nothing happens to change the situation, it could be catastrophic.”

It already is for the hundreds of thousands of people who are now all but guaranteed to face some level of food insecurity in the coming months. The IPC projection that 4.6 million people will see severe food shortages takes into account the ongoing humanitarian response.

And if the warring parties continue to limit access, as they currently are in parts of Unity and Upper Nile states, or if requested funding doesn’t come through, then “the number of people we’ll be able to assist will be vastly diminished,” Hughes said. WFP, alone, is currently looking at a $230 million funding shortfall. Unless the money comes through, “we simply won’t have the resources to be able to provide assistance on the scale that’s required.”