Hours before an army general in Burundi announced he had relieved President Pierre Nkurunziza of his duties, a small group of experts were making predictions before a packed audience in Nairobi.

Tensions had been building for a fortnight in Burundi’s capital, Bujumbura, where police repeatedly clashed with protestors demanding Nkurunziza abandon his bid to run for a third term in the presidential election set for next month.

A coup d’état was one of the contingencies being discussed in Wednesday’s morning meeting, but those gathered at the Institute for Security Studies (ISS) event couldn’t possibly have known what was about to happen.

That afternoon, with Nkurunziza away in Tanzania attending a regional summit on Burundi’s crisis, Major-General Godefroid Niyombare, a former chief of army staff recently sacked from his post as head of the national intelligence service, went on the radio and made his announcement.

Rival army factions then began fighting each other and on Thursday afternoon they were still battling for control of the state broadcaster.

Any further escalation or militarisation of the current crisis could result in the commission of mass atrocity crimes.

The biggest concern now is that the decade of peace Burundi has enjoyed since the end of a 1993-2005 civil war could unravel, prompting fresh waves of refugees and spreading conflict to neighbouring countries.

“The stakes for Burundi but also for the wider region are high,” Sarah Jackson, deputy regional director of Amnesty International, told the seminar.

The civil war pitted rebels from Burundi’s Hutu majority (85 percent) against a Tutsi minority that dominated government and the military. This imbalance was addressed in the 2000 Arusha Accords that eventually ended the war and established ethnic quotas in the army and the government.

The divisions during the recent unrest have not been so much Hutu-Tutsi as between supporters and opponents of Nkurunziza, who was a rebel commander during the war.

There have been reports, however, that the government has portrayed its opponents as being mostly Tutsi, and also rumours that the ruling party’s youth wing, the Imbonerakure, have been targeting Tutsis. Nkurunziza and Niyombare are both Hutus.

Jackson said a coup might revive ethnic tensions and lead to tit-for-tat attacks between the Imbonerakure and the youth wings of other parties. The civil war began with these kinds of hostilities.

Rwanda’s president has asserted that fighters from the Democratic Forces for the Liberation of Rwanda (FDLR), a Hutu rebel group based in the Democratic Republic of Congo (DRC), have crossed into Burundi “and might get involved directly” in the unrest there. The FDLR have been in the DRC since 1994, when some of its fighters were involved in the genocide in Rwanda. Its raison d’etre remains the overthrow of Rwandan President Paul Kagame, a Tutsi.

Remarks by Kagame critical of his Burundian counterpart’s handling of the situation have been interpreted as a veiled threat to send troops across the border.

“The last thing we want to see is for the Burundi crisis to develop to the point where the Rwandan government feels it has the need or the legitimacy to intervene,” said Jolanda Bouka, an analyst at ISS.

“We need to pay close attention to the FDLR but also to remnants of the M23 and to how groups could be used as proxies if this takes on a more regional character,” said Jackson, referring to the mostly Tutsi, Congolese rebel group that surrendered in November 2013. Rwanda has repeatedly denied backing or orchestrating the M23.

Even before the coup, many Burundians had fled to the country’s neighbours: Rwanda, the Democratic Republic of Congo and Tanzania. Many said they were afraid of attacks by Imbonerakure. Others told the BBC severe food shortages had prompted them to leave.

According to the UN’s refugee agency, UNHCR, 55,000 Burundians have fled to these countries over the past six weeks. A further 20,000 are waiting on the Tanzanian island of Kagunga for transport across Lake Tanganyika to a camp at Nyarangusu.

Conditions on the island are deplorable, “with village leaders expressing concerns regarding increasing tension and potential friction between the local population and asylum-seekers, according to UNHCR. “The absence of adequate latrines and sanitation services is a specific concern raising fears of disease.”

The majority of those fleeing Burundi are women and children, including a large number of unaccompanied children, spokesman Adrian Edwards said.

Tanzania has played host to vast numbers of refugees for decades and recently granted many citizenship. But recent years have seen its welcoming stance wane. In 2012, it ended the refugee status of almost 40,000 Burundians – on the grounds that their country was peaceful – and obliged them to return.

“They [Tanzania] don’t want a repeat of history,” nor a new security headache just as the government wrestles with a rise in Islamist militancy on the coast, said Bouka.

UNHCR, together with the World Food Programme, UNICEF and OCHA, the UN’s humanitarian coordination body, are drawing up a Regional Refugee Response Plan that should be finalised by the end of May. UNHCR is now contemplating a worst-case scenario that could see 300,000 flee.

Jackson said the reconstituted army was “one of the best products” of the 2000 Arusha Accords. Its troops were widely welcomed when it deployed on the streets of Bujumbura during recent protests, in contrast to the police, which responded heavy-handedly to the demonstrations, sometimes with deadly consequences. 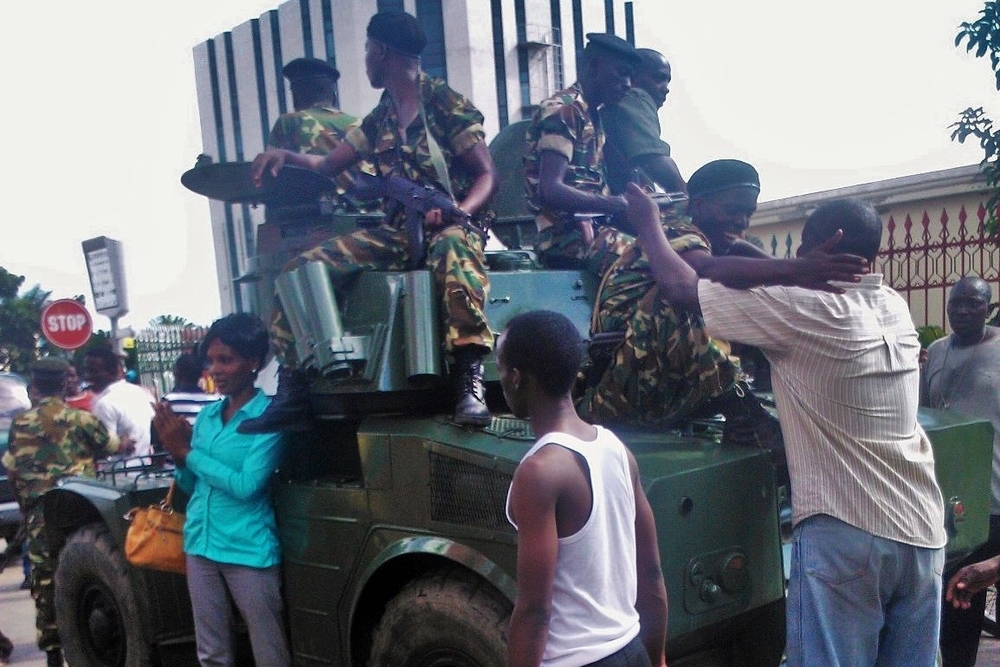 But in the wake of the coup, divisions between those supporting the coup and those backing Nkurunziza quickly manifested themselves in battles for control of the capital, especially state radio.

There have also been reports of negotiations between the two army factions.

Writing in Kenya’s Nation newspaper on Sunday, Nic Cheeseman, a specialist in sub-Saharan African politics at Oxford University, warned that “the memory of civil war and how to mount effective rebellions against the state is still fresh. This combination is a recipe for political disorder and, worse, a resumption of civil conflict."

But Thierry Vircoulon of the International Crisis Group, who had highlighted the risk of a coup at the ISS meeting, pointed out today that “Burundi’s history has been marked by several bloodless military coups.

“This is not the first time that a president was dismissed by a coup while abroad. In 1976, President Jean-Baptiste Bagaza took power in a bloodless coup but was himself the victim of another coup while he was in Canada in 1987. President Pierre Buyoya organised two coups, and after each stayed in power for several years (1987-1993 and 1996-2003),” he wrote.

Vircoulon also pointed out that Niyombare had pledged in his broadcast that he wants to “resume the electoral process, and that he says he will work with civil society, religious leaders and politicians.”

At the ISS seminar, Jackson warned that Burundi was “on the brink of a human rights crisis”. The main pre-coup concerns included: the violent repression of protests; a clampdown on freedom of expression exemplified by restrictions placed on independent radio stations; and the actions of the Imbonerakure, whose members long appeared to enjoy impunity.

In the wake of the coup, three media houses were attacked by loyalist forces. The most popular, Radio Publique Africaine, was torched after broadcasting Niyombare’s coup announcement. It had only been reopened by Niyombare’s supporters on Wednesday, having been silenced since late April by the government.

Reporters Without Borders Secretary-General Christophe Deloire deplored what he described as an “information war”.

“While chaos reigns in Burundi it is essential that the media can continue to broadcast so as to tell the Burundian people what is really going on,” he wrote.

The New York-based think tank Global Centre for the Responsibility to Protect said the situation in Burundi remained very volatile and spoke of “catastrophic consequences” if the power vacuum wasn’t resolved soon.

“Paramount among these is the risk that any further escalation or militarisation of the current crisis could result in the commission of mass atrocity crimes against vulnerable civilians. Immediate steps must therefore be taken by all sides to de-escalate tensions, stabilise the country and protect the gains of more than a decade of peacebuilding,” it said.