Anthropologist and author of "Illegality, Inc." Ruben Andersson of the London School of Economics explains why an EU plan to destroy migrant smugglers' boats is doomed to fail.

Migration loot lined the wall of the Red Cross hangar on Gran Canaria. It was springtime five years ago when my humanitarian host showed off row after row of gleaming red 40-horsepower Yamahas, confiscated from the large wooden fishing canoes that once brought willing workers from faraway West Africa to the Canary Islands. Looking back from our death-stricken present, I now see these migrant motors as souvenirs from a more innocent era in Europe’s futile “fight against illegal migration” – and as keys to understanding why the latest desperate bid to stop it is doomed to fail.

Stop the boats; destroy them and attack the smugglers; and so halt the refugees for their own good – this is now one of our politicians’ main messages, faced with the mass deaths resulting from their refusal to continue Italy’s sea rescue campaign of 2014. In launching a full-frontal assault on smugglers and their boats, our leaders may politically succeed in shifting blame onto a reviled group. Yet they are utterly failing to understand the nature of the smuggling business. For what is the point of taking out a few individuals or destroying their vessels – difficult as this will be in practice – if the demand driving their trade remains in place?

This was well understood by Senegal’s resourceful trip organisers – usually fishermen out of work rather than professional smugglers – at the time of Spain’s 2006 “boat crisis.” As Spanish border guards confiscated their Yamaha motors, new ones could always be found; and as their long wooden fishing boats were wrecked in the 1,500-kilometre crossing to the Canaries, new ones were easily built. At least the European border agents at work in West Africa knew that destroying the thousands of small fishing boats there was nonsensical; not only would they immediately be replaced with new ones, but the local economy – based on fishing – would take even further hits, increasing not diminishing the need to migrate.

Senegal’s boats are themselves but one type of vessel in an ever-changing range used by migrants since the 1990s, when the European Union first started closing its common external borders. Around the Strait of Gibraltar I would see the gamut on offer on border guards’ picture galleries or in rescue workers’ storage rooms: inflatable boats, hydropedals, fibreglass vessels, even jetskis and paddles sculpted out of a single piece of wood. I met migrants who had come across the Strait in “toy” boats of the kind used by children in pools – “any buoyant artefact, really,” as one hardened sea rescue chief told me. As those put in charge of the thankless task of closing the border know, destroying one type of vessel will immediately generate a market for another.

In Morocco, the better and faster boats were invariably provided by smugglers. This is what our leaders do not want to admit: that smugglers live off Europe’s closure of all legal routes into the continent. If you destroy their delivery mechanism, they will simply find another, more fragile kind. The problem is not the vessel, nor the person piloting it; rather, it is why the market exists in the first place.

Our politicians keep talking about “unscrupulous traffickers,” insinuating that migrants and refugees are passive victims. But people forced to move are creative, resourceful and anything but stupid. Most refugees and migrants know about the risks yet still they embark rusty vessels, since staying behind is either more deadly – as in Syria – or a recipe for wanton incarceration and endless desperation, as in chaos-ridden Libya. As demand grows, a market has emerged in the shadow of more controls, replacing the fishermen-captains of yore with professional smugglers and criminal networks. Worse, repression has helped create a captive market in Libya, where migrants are seen as fair game by security forces, militias and bandits. Instead of being valued customers, they are now brutalised like cattle, kept as hostages or packed into the hull of rusty ships – which should preferably remain unpiloted, to avoid the detention of anyone seen as “trafficker.”

Instead of trying to destroy part of the smuggling supply chain, our leaders should undercut their business by creating incentives not to use it. This means taking in refugees through new legal routes, for instance ferrying them out of Libya and Syria. Such a move would remove the captive element of the smuggling market, greatly diminishing its predatory hold and its profits – while limiting the man-made tragedies of the Mediterranean, as long as a full rescue response is also put in place.

Artisanal boats moored on a beach in Dakar, Senegal. The UN Food and Agriculture Organisation estimates that there were around 16,000 small fishing boats in Senegal in2011, from just about 5,000 in 1982. Local fishermen have also been blamed for overfishi 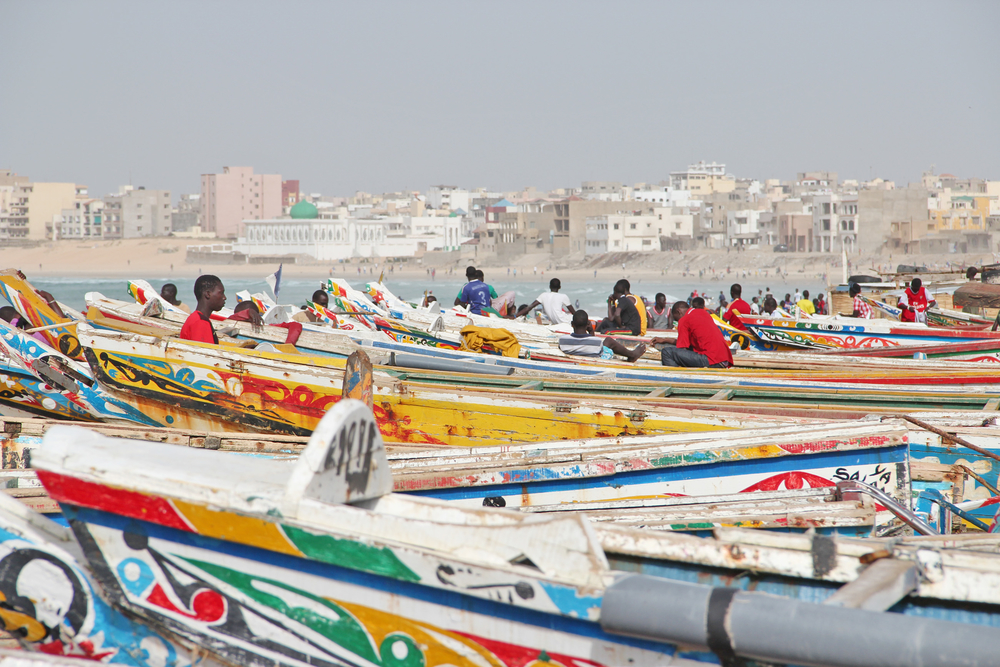 Back in 2010, I stood with a deported migrant on a Senegalese beach packed with boats: fishing canoes in beautiful reds, yellows and greens, sporting Spanish flags or the names of famous wrestlers scribbled on the hull. As we looked out across the shores where Spanish vessels and European planes now patrolled, I asked my friend if he would ever try to leave again. “We have no fear,” he said defiantly; there were stronger motors on the market now, 60-horsepower Yamahas, and new routes through the Sahara desert, which his friends were already embarking on. “We have no fear of the planes, we have no fear of the boats, we have no fear of the crisis.”

People will keep trying to leave no matter what obstacles we put in place, no matter how many boats we burn, no matter how many smugglers we prosecute. A market will emerge to cater for their needs. It is within our power to regain control of that market: to organise it, to legalise it, to undo its predatory trend. If we do not start doing so, we are left with a dangerous brew indeed. Destroyed Libyan ships will be replaced by even more precarious vessels; existing routes will be pushed into even riskier areas; and new criminal gangs will fill the gap left in the market by European “attacks” on smugglers. And all this will yet again bring more, not fewer, deaths in the Mediterranean.