On Saturday morning, The Sun, Britain’s popular right-leaning tabloid, ran a piece by one of its more provocative columnists with the headline: “Rescue boats? I’d use gunships to stop migrants.” The column went on to refer to migrants as “a plague of feral humans” who had turned British towns into “festering sores."

Hours after the article appeared, news of the latest tragedy in the Mediterranean began to emerge. At least 800 migrants, including many children, had drowned after their rickety, wooden boat capsized off the coast of Libya.

One would hope the columnist, and indeed the editor who published the article, felt at least a twinge of shame. But the tone of the piece, and the fact that it elicited a good deal of favourable feedback from readers, lays out in bold the dilemma now facing the European Union over migration.

Despite much public handwringing over last weekend’s tragedy, European politicians approach the issue with great trepidation. It is hugely controversial in all EU member states, and the accepted thinking is that appearing “soft” on immigration is a sure-fire vote loser.

At the end of last year, the British government, perhaps with next month’s general election in mind, declined to support a continuation of Italy’s Mare Nostrum search-and-rescue operation in the Mediterranean, arguing that it served as a “pull factor” that encouraged even more migrants to come to Europe.

Despite repeated warnings from the UN’s refugee agency, UNHCR, and the International Organization for Migration (IOM), the EU did not step in to provide funding for Mare Nostrum to continue.

Instead, it launched Operation Triton, a much-reduced effort led by the EU border agency Frontex, with an emphasis on patrolling EU waters rather than search-and-rescue.

Today, the warnings have been tragically realized: the tumult across much of the Middle East and North Africa has helped drive the death toll in the Mediterranean up to 1,800, 30 times higher than at this stage last year.

"We fear that the 2014 total of 3,279 migrants drowning in the Mediterranean may be surpassed this year in a matter of weeks"

“We fear that the 2014 total of 3,279 migrants drowning in the Mediterranean may be surpassed this year in a matter of weeks,” IOM’s Joel Millman told journalists in Geneva this week. “It could well top 30,000 by the end of this year.”

So what does the EU intend to do to prevent such predictions becoming a reality?

At an emergency meeting on Monday, EU interior and foreign ministers sketched out a 10-point action plan to be finalised at a leaders’ summit on Thursday.

The two most concrete proposals involve clamping down on people-smugglers by seizing and destroying their boats and strengthening Europe-wide investigations.

Other proposals include extending Triton’s operational area and ensuring that all migrants are fingerprinted, but there is no suggestion yet of expanding the mission’s mandate to search-and-rescue.

Volker Türk, UNHCR’s head of international protection, is calling for more. He would like to see commitments to providing more legal channels to the desperate people making risky journeys across what is now the deadliest stretch of water in the world.

Among the survivors of shipwrecks last week were a 16-year-old Senegalese boy hoping to find work so he could send money home to his younger brothers, and a Syrian woman with her toddler who hoped Europe would offer her asylum. For them, the only way to realize those dreams was to put their trust and money in the hands of an unscrupulous smuggler.

A 25-year-old women did not survive the high seas ordeal and was taken off an Italian coastguard vessel in a body bag. 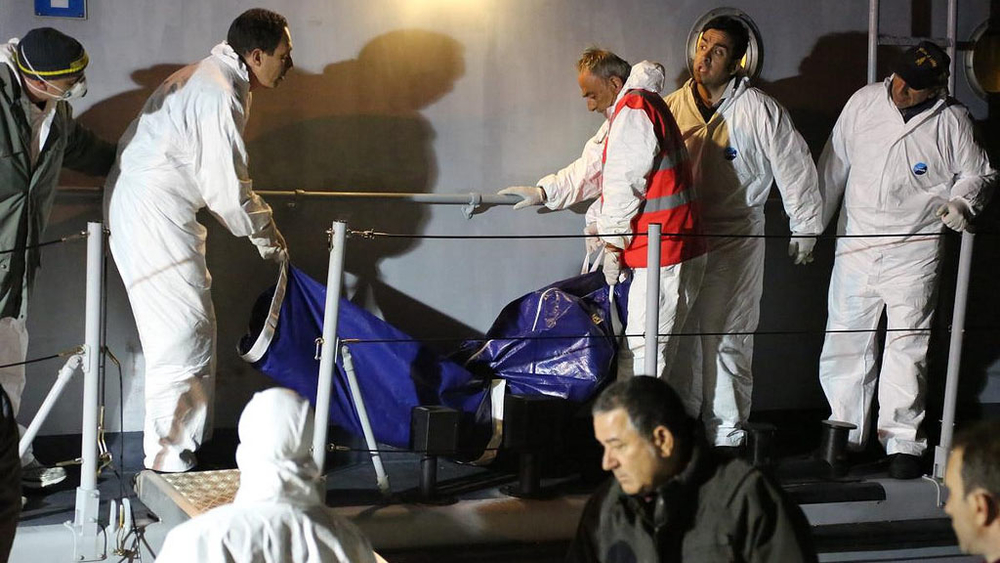 UNHCR estimates that up to 40 percent of those crossing the Mediterranean this year are asylum-seekers fleeing conflict and persecution in Syria, Iraq, Eritrea and elsewhere.

Destroying the boats they hope to travel in will not address the root causes of their flight, Türk argues. “There is a regional crisis on Europe’s doorstep,” he told IRIN. “(In) Syria, Libya. I have just returned from Iraq. And that crisis is not going away.”

Türk wants a firm commitment from Europe to accept a significantly higher number of refugees for resettlement. In 2014, member states accepted just 7,525, although Germany granted humanitarian admission to a further 10,000 from Syria.

“What we have asked is that at least we manage to resettle about 130,000 refugees, the most vulnerable among them,” he said. “But we know this is not going to be enough. We desperately need higher numbers of commitments to resettlement.”

The EU allows its own citizens to roam freely across its 28 member states, crossing borders and seeking employment where they choose, but has erected an insurmountable barrier to just about everyone else.

In addition to resettlement, the UN and other organisations are calling for more legal avenues to be opened up, such as issuing humanitarian visas to asylum-seekers and temporary work visas to economic migrants.

But the EU action plan contains only vague commitments on these issues. On resettlement, it suggests “a voluntary pilot project,” with no mention of specific numbers. On legal alternatives to irregular migration, it offers only to “consider options for an emergency relocation mechanism.”

Presenting their plan on Monday, European ministers appeared to speak with one voice. Federica Mogherini, the EU’s foreign policy chief, said there was finally agreement that Europe must act together.

But behind the public show of unity, individual EU member states clearly have very different ideas on how to tackle the crisis in the Mediterranean.

British Home Secretary Theresa May has publicly made clear that her preference is to focus on cracking down on smugglers.

Less publicly, the Home Office is believed to favour Australia’s policy of intercepting migrant boats and turning them back. That policy has been sharply criticised by the UN, with one UN official saying such a suggestion, “fills us with dismay.”

Germany, which has received by far the EU’s highest number of asylum requests, wants to see more burden-sharing, with asylum-seekers spread more evenly among member states. But it is hard to imagine increasingly euro-sceptical Britain accepting asylum-seekers who first sought protection in Germany as part of a burden-sharing agreement.

Italy and Greece, struggling with daily tragedies on their shores, believe a common agreement should include more financial support to countries on the frontline of the migration crisis. But the domestic political fall-out were Germany to be asked, again, to transfer money to a cash-strapped EU member in the south makes this seem unlikely.

Ultimately, national interests may prove stronger than a collective desire to save lives in the Mediterranean. As a result, Thursday’s meeting may not bring any firm commitments, particularly on resettlement.

Last December, the new UN High Commissioner for Human Rights, Zeid Ra’ad al Hussein, warned the EU that its policy on migration risked turning Europe into a “xenophobic… gated community” whose citizens “averted their eyes from the bloodstains in the driveway.”

If the EU can’t unite in a spirit of generosity and humanity, Zeid’s warning may well become a reality.