Xenophobia doesn’t exist in isolation. It needs social problems and economic hardship to flourish. After an upsurge in violence in Durban and Johannesburg that has claimed seven lives and forced more than 5,000 people to flee their homes, here’s a look at South Africa’s long history of xenophobia and some of the misconceptions that have been allowed to take root.

All about the numbers

Xenophobia feeds on perceptions, and one of the most enduring is that South Africa is flooded with “foreigners” – code for non-white migrants, more specifically other Africans. Migration though has a long history, with the region providing labour to the country’s mines from the 1870s, and leadership to the early labour movement. But xenophobia is linked to the end of apartheid in 1994 and the arrival of migrants from more distant lands.

In 1997, Home Affairs Minister Manogosuthu Buthelezi claimed – without providing any supporting evidence – there was an “illegal population” of between 2.5 million and five million people in the country. He called on citizens to aid the authorities in their “detection, prosecution and removal." That year, 30 asylum-seekers were killed in unprovoked attacks.

Estimating the number of migrants (formal and undocumented) is never easy. But the gulf in the figures cited is extremely wide - from 1.6 million to six million - out of a South African population of 54 million. What is not in doubt, as surveys regularly reveal, is that migrants are viewed generally negatively.

But there is selectivity in the prejudice. Migrants from culturally akin Botswana, Lesotho and Swaziland are regarded more positively than those from neighbouring Zimbabwe and Mozambique. Migrants from further afield, especially Nigeria, Democratic Republic of the Congo and Somalia scored the worst in a 2010 “favourability” index by the Southern African Migration Project (SAMP).

An official unemployment rate of 26 percent (37 percent when longer-term job-seekers are included), yawning inequality, and sclerotic social service delivery are seen as the wider context for xenophobia. In the seeming competition for scarce resources, South Africa’s poor view foreigners as rivals for jobs, houses, and the amenities anticipated with the end of apartheid.

There is little evidence that foreigners are the problem. According to Hama Tamukomoyo of the Institute of Security Studies, “research by the Gauteng City-Region Observatory showed that rather than causing unemployment, international migrants contribute to the economy by renting shops from South Africans, providing jobs to locals and paying value added tax. Foreigners that run businesses employ more South Africans than South African-run businesses do.”

A 2014 Migrating for Work Research Consortium (MiWORK) report noted that while African migrants do better in the job market than local South Africans, “they are more likely to be employed in the informal sector and in precarious employment, both characterised by lower levels of earnings.”

“We don’t believe that the xenophobic violence is about foreign nationals ‘stealing jobs’. It’s about deep economic inequality and the government’s failure to implement policies that create jobs and grow the South African economy. It’s about dire socio-economic circumstances for the majority of South Africans,” Mienke Mari Steytler, spokesperson for the Institute of Race Relations, told IRIN.

When President Jacob Zuma’s son, Edward, mused last month that foreigners were not only drug dealers but a “security threat” and must go, he was reflecting an entrenched idea linking migrants to criminality, held by 55 percent of South Africans, according to a SAMP survey.

While not all migrants are law abiding, the stereotyped image of West African criminal kingpins corrupting society – once a staple of the media - is factually incorrect. According to a 2014 report by the National Institute for Crime Prevention and the Reintegration of Offenders, foreign nationals make up just four percent of the total sentenced population.

Somali shopkeeper Abdul Abdullah has a generator to light his shop, but most of his neighbours in Zandspruit, an informal settlement near Johannesburg, rely on candlelight 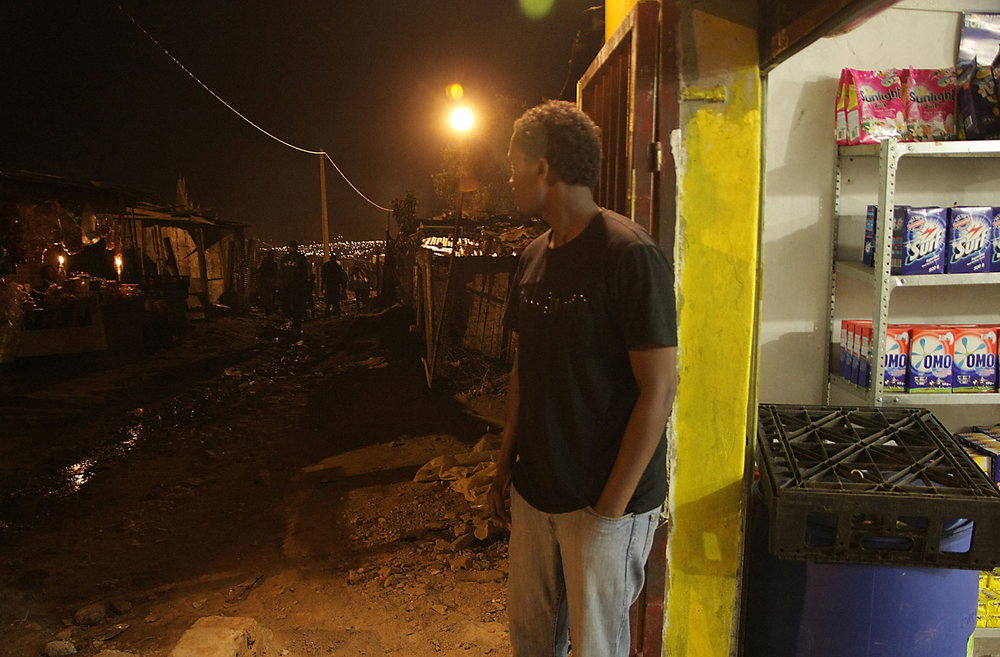 “We are not dealing with hard facts, we’re dealing with perceptions,” David Cote, at Lawyers for Human Rights, told IRIN.

Is the violence spontaneous or directed?

Historically it has been a bit of both, according to Cote. At the local ward level, foreigners are easy scapegoats for the ruling African National Congress (ANC) party’s service delivery failures - and are the victims of violence in nearly every protest against the government’s performance. “Local businesses are also trying to rid themselves of competition” from foreign-owned informal “spaza” shops, and are accused of stoking the attacks, said Cote.

Local authorities have adopted “a ‘protectionist’ position, which leads to various regulatory and policing responses that seek to disadvantage, if not entirely eliminate, migrant entrepreneurship,” according to SAMP researchers Jonathan Crush and Sujata Ramachandran.

There is a widespread perception that migrant-owned spaza shops somehow disadvantage South Africans, and the ANC has tapped into the resentment that newly-arrived foreigners seem able to set-up shops and make money. Speaking in a climate of mounting tension in January, Small Business Development Minister Lindiwe Zulu said migrant entrepreneurs must share their trade secrets.

Violence against migrants and their property is a constant threat, with the worst eruption in 2008 when 70 people died. But as the latest unrest has spread, many South Africans have rallied to support their foreign-born neighbours and, shocked and dismayed, have condemned the attacks.

President Zuma and his ministers’ belated move to reassure migrants and contain the violence has lacked a similar ring of sincerity and urgency. Past initiatives to roll back xenophobia have lapsed – undermined by official denials of the existence of the problem, the violence explained as simple criminality.

“The country’s leadership – from the highest level to the local level – must speak in a unified voice to dispel the myths about foreign nationals,” wrote Tamukomoyo. “The state’s intelligence agencies must direct their efforts to better understanding the dynamics behind the violent attacks, to better predict where they may occur and to what extent they are organised."

According to Cote, unlike in the past where perpetrators of violence have often escaped justice, “I hope the question of impunity is addressed this time around, that prosecutions take place and people are sentenced appropriately.”