During nearly a year of conflict between Russian-backed separatists and Ukrainian government forces in eastern Ukraine, neighbouring Poland has received less than 3,000 of the 674,000 Ukrainians that have fled the country.

However, the Polish Office for Foreigners, which processes asylum application, has so far not granted refugee status to any of the 2,765 Ukrainians who submitted applications in 2014 and the first two months of 2015. As many as 1,700 Ukrainian asylum seekers are still awaiting refugee status decisions, while 645 have already been rejected.

“The Polish Office for Foreigners holds the view that Ukrainians from the eastern part of the country should make primary use of the so called ‘internal flight alternative’, which means that they do not have to leave Ukraine in order to find safety, as the Ukrainians authorities are able to provide them with legal protection,” explained Rafal Kostrzynski, a spokesperson with the UN Refugee Agency (UNHCR) in Poland.

In reality, according to UNHCR, 1.1 million eastern Ukrainians internally displaced by the conflict are struggling to get assistance from the Ukrainian authorities and report facing discrimination when trying to find work in other parts of the country.

Kostrzynski said that many of the Ukrainians he had spoken to in Poland reported that goodwill in western Ukraine had its limits. “With the escalation of the conflict, the polarisation of Ukrainian society is deepening,” he told IRIN.

“Those who arrive from the East are told they should go back and experience the war, which they initiated. Additionally Ukraine is suffering from economic difficulties and the government is struggling with delivering humanitarian aid, registering IDPs (internally displaced persons) and supporting them in getting access to different types of social benefits.”

A ceasefire signed in Minsk in mid-February has done little to stop the conflict with heavy shelling continuing in northern Donetsk and Luhansk. The conflict has severely damaged infrastructure in these regions and shut down hundreds of private and state-run businesses leaving countless Ukrainians jobless, and with limited access to basic living needs.

Various Polish NGOs, including the Helsinki Foundation for Human Rights (the HFRH), have criticized the Polish authorities for providing different levels of assistance to Ukrainian refugees, depending on whether or not they can prove Polish descent.

In mid-January 2015, the government carried out a one-off humanitarian rescue mission for 179 Ukrainians of Polish origin from the Donetsk and Luhansk regions. The evacuees were transported to two facilities in north-east Poland where they can stay for up to six months, and are given access to language lessons, schools for their children and support in finding employment and housing. Rather than having to apply for refugee status, they can apply for permanent residence.

Ukrainians with no familial ties to Poland, on the other hand, struggle even to legalize their stay in the country.

While they await refugee status decisions they can either stay at accommodation facilities provided by the Polish Office for Foreigners or opt to receive a monthly stipend of US$190 per person and find their own accommodation.

After their asylum applications are rejected, some appeal the decisions, others return to Ukraine, and some move on to Western Europe, said Kostrzynski. However, having registered an application in Poland, they risk being returned there under the European Union’s Dublin regulation which requires asylum applications to be processed in the country where they are originally submitted.

Little is known about those who return to eastern Ukraine. “Generally such people simply disappear from the radar,” said Kostrzynski.

In an open letter to the Minister of Interior Affairs in January, HFRH urged the government: “to treat all Ukrainian citizens fleeing their country in fear of hostilities in a humane way”.

The Ministry responded in February that in the future it “will be poised for allowing a greater number of people seeking protection to enter Poland”.

According to Kostrzynski, the Polish authorities have also recently expressed willingness to consider whether the ‘internal flight alternative’ should still be applied to Ukrainian asylum seekers.

In the meantime, many Ukrainians in Poland are still anxiously awaiting the outcome of refugee applications. IRIN spoke to two of them.

After pro-Russian rebels took control of Donetsk in May 2014, Sasha, a former director of a bookkeeping company from the small town of Makeyevka near Donetsk, and his partner Marina, no longer felt safe anywhere.

“Our town was overtaken by lawlessness. Separatists seized many buildings in our neighbourhood. They controlled the streets, looted shops and banks, were confiscating apartments abandoned by people who’d escaped the war,” said Marina, who ran her own hair salon in Makeyevka.

Rebels stopped Sasha at their checkpoints twice and on both occasions he was detained for many hours and beaten up.

“Under the control of the pro-Russian rebels, Donetsk changed dramatically,” he said. “We were not allowed to speak Ukrainian anymore; all Ukrainian flags were removed. Living amongst neighbours who were reporting us to the separatists for speaking Ukrainian in our home was unbearable.”

The rebels set up their headquarters only 800 meters from the building where Sasha and Marina were living and regularly shelled neighbouring towns from directly under their balcony. The huge force of the explosions broke every window in their apartment.

When the rebels caught Marina trying to take a picture of their damaged building with her cell phone, they pointed a Kalashnikov rifle at her.

“I was shivering, crying and begging them to let me go. They eventually released me, but I knew that they would be watching me closely,” she recalled.

Following this incident, Marina and Sasha decided it was time to leave eastern Ukraine. They crossed the Polish border in early October 2014.

“Neither of us has a direct Polish origin. But the sister of my grandmother married a Polish man and migrated to Poland shortly after World War II. I haven’t seen her family since my childhood, I remembered only one surname of one uncle, and the city where I believed he might live,” said Marina. 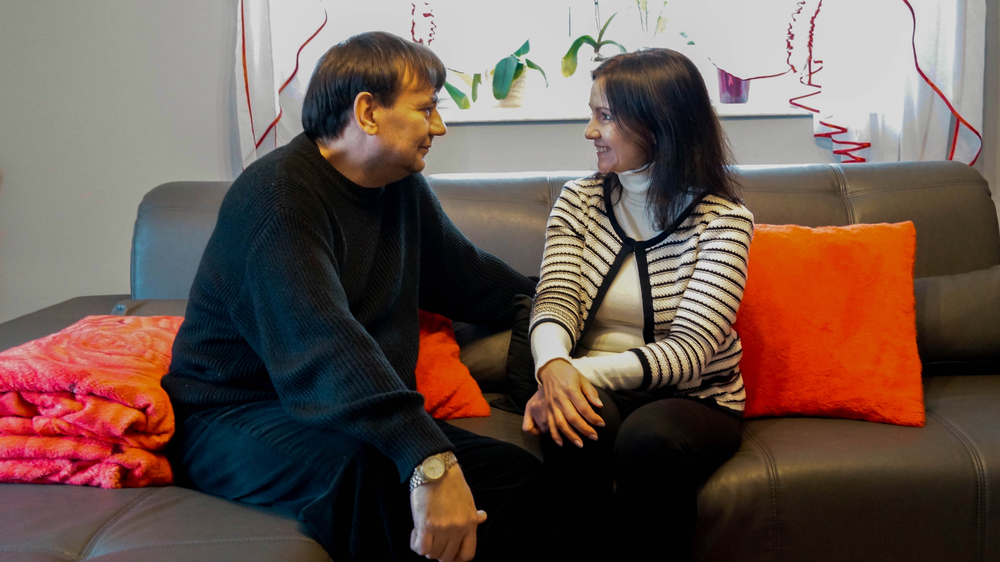 During their stay at a facility run by the Polish Office for Foreigners in the town of Bezwola in eastern Poland, Marina and Sasha established online contact with a Polish student who helped them find Marina’s relatives living in western Poland. They were happy to help the couple start a new life in Poland.

The couple are now surviving on their small monthly stipend and anxiously awaiting a decision regarding their refugee status.

“We do not even acknowledge the possibility of receiving a rejection. I could not imagine returning to either eastern or western Ukraine,” said Sasha.  “We would not be able to go through the same experience of war - hiding in cellars, fearing for our lives.

“We also saw in the Ukrainian media hundreds of internal migrants having to sleep on mats squeezed into sports halls in western Ukraine. These people cannot find jobs or rent rooms because of the prejudices against them. There is no future waiting for us in Ukraine.”