Aid agencies are partial, unaccountable and potentially corrupt, and they fail to meet refugees’ most pressing needs.

These are just some of the criticisms emerging from a series of new focus groups with refugees and others who receive aid across the Middle East.

Concerns included a lack of consultation about people’s needs, a failure to protect the most vulnerable, confusion over which agency was responsible for what, duplicated aid, as well as instances where help was perceived to be withheld or prioritised due to political or religious affiliation.

“When you decide to help someone you have to remove all their affiliations and simply treat them as humans,” noted one female youth leader from Palestine.

“Humanitarian organisations need to provide information about their services because it is not humane to respond to refugee information needs with ‘I don’t know’,” added a female refugee in Yemen.

The interviews conducted in Egypt, Jordan, Lebanon, Palestine and Yemen were commissioned by the organisers of the World Humanitarian Summit (WHS), ahead of this week’s consultation for the Middle East and North Africa, held in the Dead Sea.

“Some of the comments were quite damning and I think it is a bit of a reality check for the humanitarian system,” said Reza Kasraï, Middle East and North African regional representative for the International Council of Voluntary Agencies (ICVA), an NGO consortium, which conducted the focus groups in partnership with the WHS Secretariat.

Details of the interviews - conducted between November 2014 and February 2015, with a mix of men, women, youth and community leaders – have been compiled in a report shared with aid organisations, donors and government officials attending the WHS meeting in Jordan and online.

The observations make uncomfortable reading for both national and international aid agencies operating in a region where large communities of Syrian, Iraqi and Palestinian refugees, as well as other migrants, are living in a mix of camp and community settings.

For a UN document, the stakeholder report is unusually candid, but its tone reflects ongoing efforts by the WHS secretariat to promote dialogue around sensitive issues rarely openly discussed within the sector.

Using a 10-point scale (where 10=high and 1=low), interviewees gave an average rating of 3 when asked if they thought aid groups were meeting their priority needs.

Asked if they were treated with respect and dignity, respondents across the five countries gave an average ranking of 3.5 out of 10; and the question of whether aid organisations considered refugees’ opinions received an average score of 2.5 out of 10.

A report card of cumulative scores of focus groups made up of refugees in the Middle East. They were asked to rank NGOs and the UN on a variety of topics. 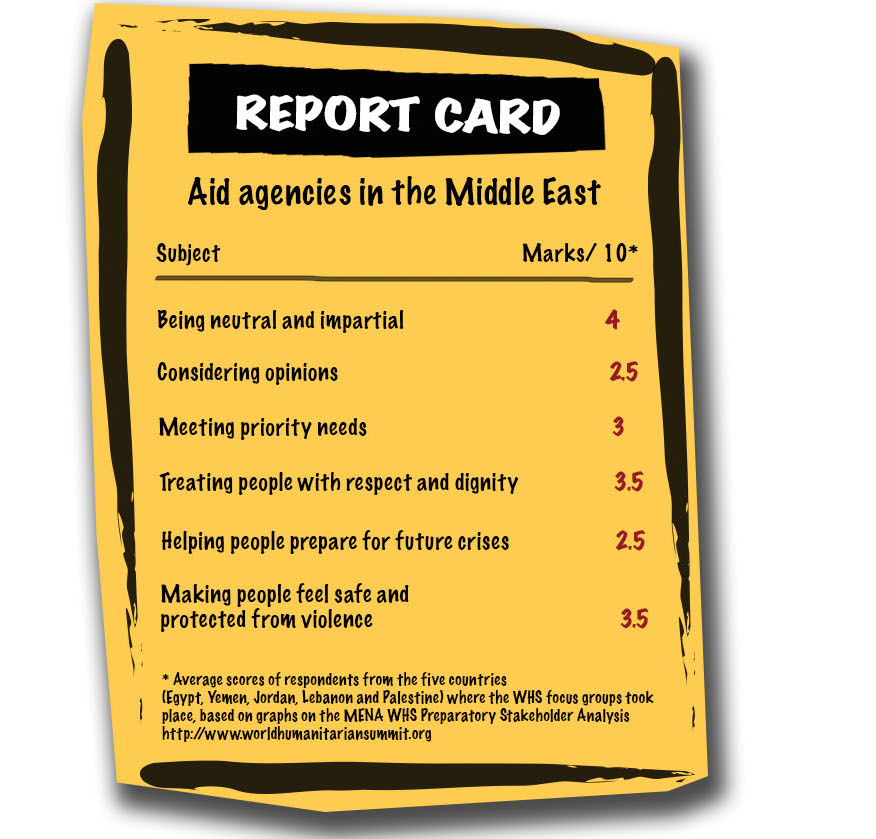 Nadine Elshokeiry, a humanitarian affairs officer with the UN's Office for Co-ordination of Humanitarian Affairs Regional Office for the Middle East and North Africa (ROMENA) and who assisted with the focus groups, told IRIN: “It is clear that people do not feel they are getting as much support as they want and that many organisations are not doing enough to communicate with [the] affected populations they are trying to help.”

But she added: “While there were some strong comments, we feel this is a very constructive criticism and it gives us something very useful to work on in terms of how the humanitarian system can improve its response.”

In addition to the 35-page WHS report, IRIN has also been shown country-specific reports on the focus groups in the Occupied Palestinian Territory (OPT) and Lebanon.

Elshokeiry said the focus groups had shown that many people didn’t distinguish between different aid organisations - seeing them all as part of one wider system.

“Because there is not always clear information about who is doing what or where aid is coming from, especially where local partners or intermediaries are involved, I think this creates a perception of a lack of accountability,” she said, noting a need for agencies to do more to communicate with the people they are trying to help.

"We feel this is a very constructive criticism"

In OPT, accountability – or a perceived lack thereof – was a major complaint among those interviewed. Many accused international and national aid agencies of favoritism towards certain groups of people and expressed concerns about aid being subject to corruption.

“The participants’ biggest issue was the lack of accountability and transparency of humanitarian organisations,” the write-up noted. “... This also raises participants’ suspicions of the possibility of corruption in humanitarian aid.”

And it adds: “… There is a perception that project budgets are not spent appropriately, but are spent on high-visibility activities, such as repainting building walls and paying for media coverage. In Gaza, distributions are said to happen in schools or other places that will be covered by the international media.”

The criticisms included: A vague mandate; refusal to delegate responsibilities to other organisations; funding shortages that have affected quantity and quality of the services in schools and primary health clinics in camps; and cumbersome bureaucratic procedures and slow decision-making processes.

UNRWA spokesman Chris Gunness acknowledged agency services have been subject to “cutting and erosion” but he told IRIN: “Going back to the 1950s, UNRWA has had a significant budget deficit year on year and this has had an impact on everything: buildings and infrastructure are crumbling, computer services taken for granted in most organisations are just not there, the list goes on.”

And he added: “Alongside the austerity brought on by the funding gap, our major departments have undergone root and branch reform which has led to efficiencies and this much is widely acknowledged by our donors.”

Who is the priority?

The perception that humanitarian organisations prioritised donors’ views over those of affected populations was a recurring theme in several of the focus groups.

“Given the fact that Palestine is under occupation and there are chronic problems in Gaza, donors and organisations are still unable to work on sustainable projects and all the solutions are short-term with no long-term impact,” noted one Palestinian youth from the West Bank. “The funding shouldn’t be based on the donors’ agenda but serve the beneficiaries,” he said.

In Lebanon, some interviewees complained about uneven or duplicated aid distributions, blaming a lack of co-ordination between agencies. They called for more income-generating opportunities to break the cycle of dependency on handouts.

“Significant corruption and nepotism existed in the distribution of aid,” the report said, with interviewees referring to “accounts of incidents of favoritism within UN agencies for certain ‘connected’ families, especially with regards to resettlement assistance”.

And in Yemen, Eritrean refugees recounted experiences of feeling humiliated and lacking dignity due to humanitarian organisations’ perceived preferential treatment of the Somali refugees compared to other refugees from Arab countries.

The main report noted that “experiences of humanitarian co-ordination are largely bleak”; refugees complained about having to pro-actively seek out different organisations and re-tell their stories due to limited referral systems between aid groups.

Lack of choice about what specific aid people received was another theme.

“Affected people consulted in the region seldom felt that their priority needs were met,” the main report said. “This finding was supported by stakeholders who highlighted how affected people at times sell the in-kind assistance they received and use the funds to purchase other goods or services.

“To truly put people’s needs at the heart of humanitarian action, stakeholders argued that people need to be given a choice over what kind of humanitarian assistance they receive,” it added.

Dana Sleiman, spokesperson for the UN Refugee Agency (UNHCR) in Lebanon – one of the leading UN agencies helping Syrian refugees – told IRIN: “We are aware of the report and welcome any additions to the discussions on how to further improve humanitarian assistance here in Lebanon.

“UNHCR staff, the Lebanese government and our partners are in constant contact with refugees throughout the country, listening to their concerns and providing a massive range of support as most refugees arrive here having lost everything.”

ICVA’s Kasraï said the WHS presented a unique opportunity to carry out a wider systemic consultation, rather than looking at individual agencies or contexts.

“It is quite unusual to get this sort of feedback ,” he said. “I think sometimes humanitarian organisations, including donors, UN agencies and NGOs, can get into a bit of a bubble, using their own language and talking amongst themselves in a jargon that isn’t always understood by the people they are trying to help.”

*This article was updated on 7 March 2015 to remove a quote suggesting that this was the first time the WHS had conducted focus group interviews ahead of a regional consultation.