Read about what we achieved.
KAMPALA

It led to increased repression, drew international condemnation and prompted foreign donors to suspend millions of dollars in aid. Then earlier this month the constitutional court threw it out. But is Uganda’s Anti-Homosexuality Act (AHA), promulgated by President Yoweri Museveni in February, truly dead and buried?

Under the AHA persons found guilty of "homosexual acts" faced jail terms of up to 14 years, and life sentences in "aggravated" cases, such as those committed by an HIV-positive person, or those involving minors, the disabled and serial offenders. The law also prohibited the “promotion” of homosexuality.

What happened at the constitutional court?

Following a petition by human rights and lesbian, gay, bisexual and transgender (LGTB) activists, on 1 August, the court’s five judges declared the AHA “null and void” on the grounds that Speaker of Parliament Rebecca Kadaga had put the bill to a vote - on 20 December 2013 - without the requisite quorum (a third of all MPs). At the time, the absence of a quorum had been pointed out by Prime Minister Amama Ababazi and others, but Kadaga reportedly ignored their objections.

Activists welcomed the ruling. The AHA “can no longer be enforced in Uganda. We expect no more discrimination against the LGBT community in Uganda,” Caleb Alaka, one of the lawyers who challenged the law, told IRIN.

“The ruling by the judges is a step in the right direction in the enjoyment of fundamental human rights of LGBT in Uganda,” Dennis Odwe, executive director of the Action Group for Health, Human Rights and HIV/AIDS (AGHA), told IRIN.

“The implication of this nullification means that health rights will be enjoyed by all the LGBTs and it will increase more donors’ support to the health sector to ensure that vulnerable groups have access to quality health services like any other persons in Uganda,” he added, with perhaps undue optimism (see below).

So is it game over for the AHA?

No. Uganda’s attorney-general has filed a motion to appeal the ruling in the Supreme Court, saying he was “dissatisfied with the whole judgement”. The precise grounds for the appeal have not been specified but they could focus on the Constitutional Court judges’ view that the state had an obligation to prove that there had indeed been a quorum on 20 December, and that the petitioners had no obligation to prove there had not been one.

Meanwhile, champions of the AHA plan to retable it in parliament and to fast-track it once plenary sessions resume. Some 215 of Uganda’s 375 MPs have signed a petition to support the AHA’s reintroduction.

“I have already surpassed the quorum requirement [with the petition signatories] but many more are promising to sign up. I am confident we shall have the bill retabled and passed into law overwhelmingly,” said MP Latif Ssebaggala who is leading the campaign to keep the law alive.

David Bahati, the MP who drafted the AHA, told IRIN: “I am not shaken by the court ruling. The ruling is no victory at all. The morals of the people of Uganda will prevail. This is just a procedural matter. It has nothing to do with our fight against the promotion of homosexuality in Uganda...

“We can’t allow and accept the promotion of homosexuality among our children, recruitment of our children into homosexual acts and encouraging the same sex marriage,” he said.

So is it now legal to be gay in Uganda?

The court ruling “does not and should not be interpreted to mean that homosexuality is now permissible in law; the Penal Code, Chapter 120 of the Laws of Uganda, still outlaws ‘carnal knowledge against the order of nature’ under Section 145” which provides for jail terms of up to life imprisonment for offenders.

Section 146 says that any person who attempts to commit unnatural offences commits a felony and is liable to imprisonment for seven years.

“The AHA’s nullification does not protect LGBTI [the “I” stands for intersex] people from ongoing discrimination, arrest, and prosecution, despite misleading international headlines to the contrary. In fact, penalties for same-sex conduct remain very much enshrined in Uganda's existing penal code,” said Neela Ghoshal and Maria Burnett, researchers at Human Rights Watch (HRW), in a 6 August op-ed.

While nobody was prosecuted under AHA in the months since parliament passed it, “one of Africa's most vibrant and outspoken LGBTI communities experienced a notable increase in arbitrary arrests, police extortion, loss of employment, evictions, and homelessness,” they wrote.

“Health providers were forced to reduce essential services for LGBTI people, who sometimes were harassed or even arrested when seeking care,” they added.

Just four days after the AHA was passed, the government ordered the Refugee Law Project, which is affiliated to Makerere University, to suspend activities supporting refugee survivors of sexual gender-based violence (SGBV) on the grounds that they were “promoting homosexuality”. 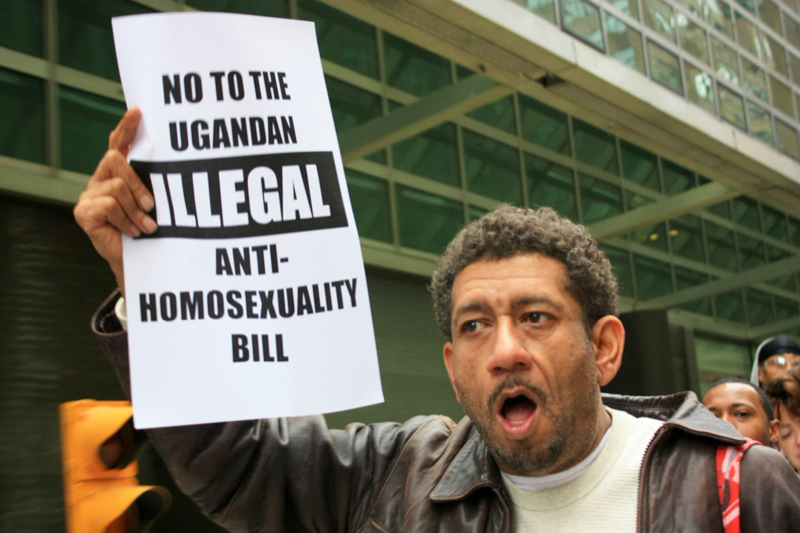 “The impact on the SGBV survivors has been very critical; normally we help up to 20 people per week to access post-exposure prophylaxis following SGBV incidents in Uganda, but presently we are unable to do so,” the project’s director, Chris Dolan, told IRIN in an email.

He added that he had expected the suspension to be lifted as a result of the Constitutional Court ruling but that this had not yet happened.

Even without the AHA, “Uganda retains one of the most severe penalties in the world for homosexual conduct,” according to Ghoshal and Burnett.

It is under Section 145, a legacy from colonial times, that in November 2013 Sam Ganafa, a prominent activist and head of Spectrum Uganda, as well as - in January - two youths who fled a braying mob, faced criminal charges.

The long reach of Section 145 became evident in June 2014 when the high court invoked it in its dismissal of a lawsuit brought against Ethics and Integrity Minister Simon Lokodo for having ordered police to shut down a workshop organized by LGBTI activists in early 2012.

Justice Stephen Musota ruled that Lokodo had acted correctly since workshop participants were “promoting” or “inciting” acts prohibited by Article 145. He rejected the plaintiffs’ argument that the purpose of the workshop was to develop human rights advocacy and leadership skills, saying this was just a cover for promoting same-sex acts.

The judge also suggested that condom distribution to gay people could be unlawful - a view that flies in the face of current efforts to tackle the HIV/AIDS epidemic. In Uganda, some 13.7 percent of men who have sex with men are HIV-positive.

“How can gay men be reached safely with accurate information and comprehensive services when the High Court argues that HIV prevention for men who have sex with men is promotion of homosexuality?"

What happens to suspended aid?

It’s too soon to say. After Museveni signed the AHA into law in February, project and budget support worth about US$140 million was suspended or redirected by the World Bank, the US and several European countries, including Sweden, the Netherlands, Norway and Denmark. In addition, the US, on 19 June imposed sanctions including travel bans, cancellation of military cooperation and funding to the Ministry of Health over Uganda’s poor human rights record, including the enactment of AHA.

A US State Department official declined to comment about the likely effects of the constitutional court ruling on US aid flows, noting that the government had announced its intention to appeal.

The Swedish embassy in Kampala said a “new strategy” for assistance to Uganda was being formulated and that “the focus of Sweden’s development cooperation will change. Sweden is broadening the cooperation, especially with civil society and the private sector. No changes to [this] are foreseen as a consequence of the court ruling on 1 August.”

Norway has a similar position, according to an embassy official, saying no decision had been taken since the 1 August court ruling. “Norway is following the debate and developments in Uganda around the nullification of this Act,” the official said.