Read about what we achieved.
PESHAWAR

More than 60,000 people have fled North Waziristan Agency to safer parts of Pakistan and neighbouring Afghanistan as Pakistan’s military launches an offensive in the region. Most of the people fleeing are children, and mental health experts are concerned that they will not have access to proper trauma care.

The Pakistani authorities have yet to set up camps to shelter the displaced, and what little mental health aid is available - usually at makeshift clinics in formal IDP camps - is out of reach for the North Waziristan children.

Psychiatrists treating residents of the Federally Administered Tribal Areas (FATA) in the northwest are especially worried about the long-term effects of conflict on the children there. In regions like North Waziristan Agency and Khyber Agency, children have been living with armed conflict for nearly a decade. They have witnessed military operations, Taliban attacks and drone strikes, and the results of these. Many children have grown up knowing only war, and the long-term effects of what they are experiencing worries mental health professionals.

As an aeroplane takes off from Bacha Khan International Airport in Peshawar, capital of Khyber Pakhtunkhwa (KP) province, children living in a nearby camp for internally displaced persons rush to their shelters, shouting, “Jet! Jet!”

Habib Afridi, 37, told IRIN: “Our children are still trying to escape from the memories at home.” After a military offensive was launched in his native Khyber Agency, Afridi and fourteen family members moved to Peshawar to live with relatives. “In Tirah [valley], in Khyber Agency, it was very normal that when a jet appeared in the skies it meant to bomb [the area], so for our children every flying machine making a loud noise means bomber jets.”

More than 43 percent of the population in FATA are under the age of 14, according to official figures, which means a large part of the population have grown up knowing war. Children are often doubly affected by the conflict, says Sana Ijaz, who has worked with children in FATA through the Bacha Khan Trust Education Foundation, a local NGO.

Often they cannot turn to the adults in their household - usually their mother - for comfort and counselling, as many adults have themselves been traumatized by the war. “Mothers are facing extreme forms of post-traumatic stress disorder,” Ijaz told IRIN. “It includes their feeling of insecurity and loss in [the] conflict, [and] they are fostering these problems in their kids.”

The lack of support makes it even more difficult for children to understand the situations they see outside their homes. In Datta Khel, a district west of Miran Shah, about 17km from the Afghan border and a popular corridor for insurgents travelling to Afghanistan, US drones have struck more than 50 times, killing hundreds of militants and civilians. People call them “ghangay” - literally from the noise the drone engines make, which is locally heard as "ghang-ghang" but has evolved into ghangay. Now, anything that sounds similar sends the children scrambling for cover.

In the afternoons, children make their way out of mud-walled homes to gather on bare hills to play before the evening lesson at the local madrassa. Here, cops-and-robbers is now soldiers-and-Taliban. Around 10 children divide into two groups, one acting as the military, the other as the Taliban. Most want to be in the Taliban.

Four children with sticks, pretending to be soldiers, try to find the Taliban, who fan out to hide. The Taliban always outnumber the soldiers. They ambush the soldiers, and the children throw dust into the air to imitate explosions, and then capture the soldiers.

An “amir” (leader) - an older child - delivers a victory speech. “O Infidels, beware! Whoever works for you will face the same consequences. These are traitors of Islam. They sold their honour for dollars. Death to them!” The rest of children shout “God is Great!”. When a kite appears in the sky the children rush to safety, shouting, “ghangay, ghangay!!” The children pretending to be soldiers laugh and run with the rest.

Families from North Waziristan traveling to Bannu. Pakistani security forces have setup checkpoints along the road. 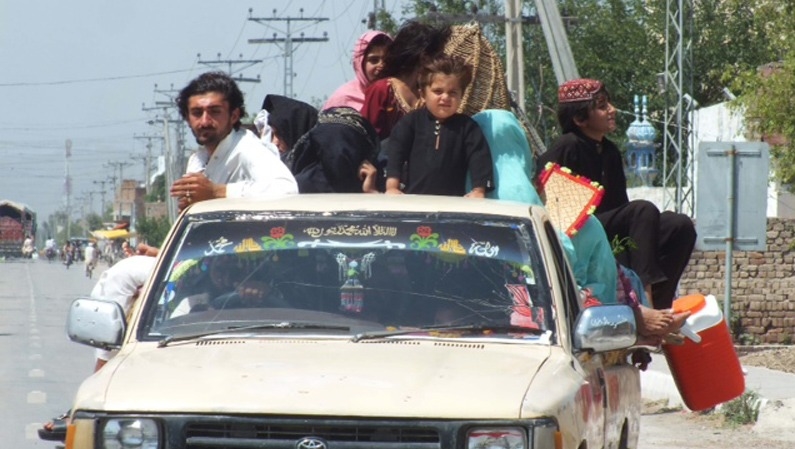 Many schools in FATA have been destroyed, so there is little to offer the children any distraction from the conflict. The FATA Department of Education says more than 1,183 schools - a third of the total in the region - are closed because they have been damaged, or people fear being caught in the crossfire between the military and the Taliban. In the schools that are still open there is often a shortage of teachers - in Bajaur Agency there is one teacher for every 74 students. Only 33 percent of children in the FATA attend school.

Inspired by videos produced by militants, children pretend to be suicide bombers or fighters. Their discussions revolve around the Taliban's latest activities, their attacks and killings. “Even my own children at home were always bringing [home] stories of Al-Qaeda, [the] local Taliban, drone strikes, and killings in Mir Ali, in North Waziristan,” Nasir Dawar, a journalist, told IRIN. “I saw children running and taking shelter under beds whenever drones started hovering in the sky.” The behavioural changes in his children prompted Dawar to resettle his family in Peshawar.

Dr Mian Iftikhar Hussain's 40-bed private clinic on the outskirts of Peshawar is a busy place as residents from FATA wait to be seen by the overbooked psychiatrist. A family arrives from North Waziristan, the husband hoping the doctor can treat several women in his family suffering from severe post-traumatic stress disorder.

“My head is full of noise, I can't sleep,” one of the women tells Hussain, who believes the patient probably witnessed a drone attack close to her.

Muhammad Gul, 70, has come from Bajaur Agency. He hasn't been the same since he witnessed an improvised explosive device (IED) blowing up. His heartbeat is irregular, he shivers constantly, and jumps at any loud noise.

Pakistan lacks the mental health resources it needs to treat all the people who need help. A 2009 study by the World Health Organization found there were only 342 psychiatrists and 478 psychologists for a population of 190 million. The shortage is even more acute in the northwest, where the conflict is constant. Facilities like Hussain’s have been unable to keep up with demand.

In 2011, the Sarhad Hospital for Psychiatric Diseases, one of the largest in the region, treated almost 90,000 patients from FATA, of whom around 50,000 were suffering from disorders caused by the conflict.

“Unfortunately, children are overlooked,” Hussain told IRIN. “[Just the] number of women facing psychological problems is almost four times higher than it was prior to the conflict in FATA.” Less than one percent of the beds in Pakistan are reserved for children and adolescents with mental health problems.

“What I have seen is that there are much deeper and stronger impacts of war on children… Thousands of children [have] lost their childhood,” said Hussain, who has been treating psychiatric patients for nearly three decades. “Stubbornness, tendencies towards violence, rejection of education, [and] an inclination towards drugs and crime are very common among these children of war.”

He points out that “The age from five to fourteen is very sensitive for human development, and unfortunately, much of the population left in conflict-stricken areas is comprised of this age group.”

There are only a handful of government hospitals offering psychiatric treatment to FATA residents, so most patients turn to overcrowded private clinics and commercial hospitals, almost all of which are located in Peshawar, an expensive, four-hour drive from North Waziristan. “The children's situation is even more pathetic, since nobody notices their issues and children cannot explain it [themselves],” said Hussain.

One of the few places children do receive treatment is at relief camps like the Jalozai Camp just outside Peshawar, where more than 12,000 children live, but they are a fraction of those fleeing the war. Millions of FATA residents have been displaced, but the authorities believe less than 20 percent have spent time in relief camps.

“What little resources are available are spent on camps, and that… [covers] only a fraction of the population,” Ali Askar, a professor at the University of Peshawar who is researching the impact of conflict on children, told IRIN.

“The situation is so chaotic that nobody cares about these children and the future of this region,” he said. “If proper attention is not given to these children, they will definitely go on to a life of crime, if they don't become lethal assets for terror networks.”

No fun and games

After 11 September 2001, Al-Qaeda set up special camps in North Waziristan to train children, a task that was overseen for years by the group's top leadership. A special group of child fighters, called Jaish ul Tifal, was set up. The original camps are closed now, and most of the Arab instructors have fled Pakistan, but the tactic has inspired a host of other groups in North Waziristan to start their own programmes to recruit children.

During the offensive to retake the Swat valley from Taliban militants in 2009, the Pakistani military claimed to have stumbled on a training camp for child suicide bombers and recovered some 200 children prepared to carry out suicide missions. The children told local authorities that before the raid there were 1,200 other children in the camp, many either bought at prices ranging from US$700 to $1,400, or taken forcibly from their parents to be trained as suicide bombers.

Children as young as 12 have appeared in propaganda videos released by the Taliban, beheading prisoners.