Schools are targeted in conflicts around the world - they might represent ideas viewed as controversial, the destruction of a civilian building that is important to a community inflicts terror, and a school reduced to rubble can rob an entire generation of education. But attacks are only part of the problem, as significant harm can also be done when educational buildings remain intact and armed forces move in.

"Attacks on educational buildings, students, teachers and academics have resulted in hundreds of students and educators being killed and many more injured," Zama Coursen-Neff, executive director of the children's rights division at Human Rights Watch (HRW), told IRIN. "Hundreds of thousands of people have been denied an education when facilities are destroyed or under threat, or when the facilities are occupied by armed forces.”

For example, the UN Children’s Education Fund (UNICEF) in South Sudan, where violence broke out in late 2013, believes that since the end of May, 24 schools affecting around 8,000 students are being used by armed forces. According to Aasmund Lok, a UNICEF child protection officer in Juba, “The majority of recorded incidents are related to different government actors.”

"We have a well-coordinated strategy both on national and local level to advocate with armed actors who use schools for military purposes,” said Lok. “But we also advocate with relevant government counterparts like Ministries of Education, Interior, Defence, as well as local authorities."

South Sudanese military directives specifically forbid the use of schools, giving UNICEF-South Sudan a powerful domestic tool in supporting the removal of government troops from classrooms, in addition to advocating along international standards. Protecting schools by forbidding their use as part of military policy contributes to much-needed reform, experts say.

On 14 August 2013 the Sudan People’s Liberation Army (SPLA) - South Sudan’s military - issued an instruction: “Under this General Order SPLA members are prohibited from…occupying or using schools in any manner."

In its 2014 report, The Global Coalition to Protect Education from Attack (GCPEA), a group of NGOs and UN agencies, profiled 24 countries where armed groups were using schools.

GCPEA is attempting to focus efforts on the ground by publishing a roadmap - the Lucens Guidelines - that outlines how military occupations impact education, and encourages parties to armed conflict “not to use schools and universities for any purpose in support of the military effort.”

“The Guidelines are practical and can influence commanders who are making decisions in battle as well as policymakers who are shaping and enforcing laws,” said Steven Haines, professor of public international law at the UK University of Greenwich, who drafted the Guidelines in consultation with governments, militaries, UN agencies, and international organizations.

When troops come marching in

"We see everything from troops using schools as their bases, barracks and training grounds to classrooms being converted into weapons depots, detention centres and even places where torture is carried out - in some cases with children witnessing or hearing it," said Coursen-Neff, pointing to HRW research on the occupation of schools in Somalia, Yemen, the Philippines, Thailand, Iraq and India.

Veronique Aubert, senior conflict and humanitarian research and policy adviser at Save the Children in London, noted that “In the Democratic Republic of Congo (DRC) we have seen all of the impacts of school occupations - increased risks of killing and injuring students, child recruitment, sexual abuse, and parents who are simply too afraid to send their children to school once the troops are around.” 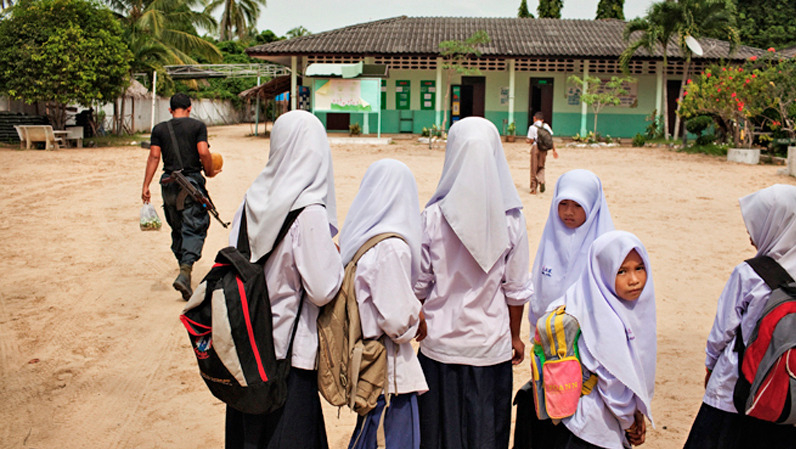 According to a 2013 Save the Children report, the armed group M23 put 250 schools out of use in 2012 by looting and occupation.

Coursen-Neff says troops in schools not only interrupt education and expose children to inappropriate behaviour, "When a military takes over a school building, it can turn the school into a legitimate military target. Picture the fortifications - sentry boxes, razor wire, even trenches - these all can provoke an attack by opposing forces.”

She also points out that “You can't use a school simultaneously as an armed centre and a civilian educational building," and that "a government’s failing to continue education over time because a school is being used by troops can be a human rights violation."

As armed forces manoeuvre to secure territory, schools can become attractive places to station troops - they often have strong walls, and plumbing and electricity.

Ending the military use of schools can pose significant challenges, including raising awareness about the harmful impacts of occupations on a case-by-case basis, as well as changing policy.

“When we work in conflict areas, it’s important that our teams and local partners raise awareness among armed groups - state and non-state - that it can violate the right to education when they occupy schools,” said Aubert.

The combination of strong legal support and the flexibility of the Lucens Guidelines chart the path for immediate implementation at all levels. “Because the Guidelines are not a legally binding document, it allows us to open up a practical conversation on a local and programmatic level with armed forces. We can explain the issues, show examples, and begin to build understanding about how military occupations are a problem,” she said.

It’s this practicality, says Greenwich University’s Haines, that gives the Lucens Guidelines their potential for absorption into military policies around the world.

“It’s important to… see that they’re not a blanket ‘no use of schools’ demand, but rather instructions that, in line with international law, protect schools as what they are: structures used for education,” he said. “We drafted them to speak to a military protocol audience in a way that they can be taken up and adopted quickly.”

Haines, who served in the British Royal Navy for thirty years, recounted a personal experience from Sierra Leone: “I saw a brigade using an abandoned school to receive and disarm child soldiers. I can’t see anything legally or morally wrong with that type of use."

Nonetheless, he points out that the Guidelines have stringent instructions for the use of even abandoned buildings, including their use only “for the minimum time necessary”, that they must remain available for education authorities to re-open them as soon as practicable, and that no evidence of military fortifications remain when troops depart.

“The Guidelines are short and clear and concrete,” said Aubert. “They make it clear that it’s not only attacks that ruin education, but military use of schools as well.”