New data indicate that stunting among under-five children is being reduced in Timor-Leste, but experts warn much greater investment is needed in areas such as micronutrient supplementation, salt iodization and education to bring levels down further.

“Overall it's important that we look at Timor-Leste as a success story,” Hongwei Gao, country representative for the UN Children’s Fund (UNICEF) in Timor-Leste, told IRIN.

A 2013 UNICEF report listed Timor-Leste as having the highest percentage of children under five who are moderately or severely stunted in the world (58 percent), matched only by Burundi. Preliminary analysis of a 2014 nutritional survey administered by UNICEF and the Timorese government shows that that indicator has dropped (improved) to 52 percent.

Stunting reflects chronic undernutrition during the most critical periods of growth and development in early life, especially the first three years. Children who are stunted are at greater risk of illness, death and impaired cognitive development.

“Stunting coming down over the recent years is a good sign,” said Joao Bosco, head of the nutrition department at Timor-Leste’s Ministry of Health. “We hope in the next five years we can reduce it to 40 percent.”

Timor-Leste, home to 1.1 million people, was a former Portuguese colony before it was occupied by Indonesia in 1975, prompting a decades-long violent struggle; it achieved independence only 12 years ago. In 2006, widespread riots and conflict due to dissent within the army led to military intervention. More than 100,000 people were displaced, mostly in the capital Dili.

Poor childcare and feeding are partially to blame for the country’s high rates of stunting.

To tackle malnutrition, the government drafted the National Nutrition Strategy in 2004, and in 2012 revised it to promote behaviour changes to improve nutrition, such as the infant and young child feeding programme, education, micronutrient supplementations, treatment of severely malnourished children, and a salt iodization programme.

“In the fight to improve nutrition, there are many factors - including having access to nutritious and secure food, using the right care practices, having good quality basic healthcare, and good water, sanitation, and deworming,” explained Gao.

“ People talk today about Timor-Leste's weak capacity. But if you don't invest in human capacity now, you'll be saying the same thing in 20 years.”

“It's unclear which of these factors played a role in decreasing stunting in Timor-Leste, but what's more important is that all of them are seen as crucial components and the government should start investing in each one.”

Despite the recent drop in stunting rates, some are concerned about the pace of progress, and link investments in child nutrition to the country’s political future.

Rosaria Martins da Cruz, director of Hiam Health, a Dili-based NGO that runs a rehabilitation and feeding centre, lamented: “If those new percentages are true, why am I still seeing my facility full of skinny children? And what does a continued high stunting rate mean for the future of this proud independent country?”

“When I was first told that my child was [malnourished] I didn’t understand,” she said. Her daughter is now four years old.

“When the nutrition assessment happened, it was the first time my daughter had been seen by a [medical professional] since she was born. She was always thin. I thought maybe she was sick, but I didn’t know where to take her or what to ask for.”

Hiam Health screens children for malnourishment in rural areas. The NGO’s facility in Dili can house up to 20 children and their mothers, as the children gain weight and the mothers are trained on everything from food preparation to hygiene.

“Most of the mothers who come to us have very little education, if any,” explained da Cruz, adding that the facility offers hands-on cooking and feeding training for mothers.

“The mothers see the impact of their work on their child’s health with their own eyes,” she said.

“Telling people `do this’ then walking away doesn’t work - they are not accustomed to educational practices,” she said, explaining that during her six-year tenure from 2003-2009 at Dili’s National Hospital - the only national referral hospital in the country - the treatment regime for malnourished children consisted of only a short lecture for parents. Only 58 percent of adults in Timor-Leste are literate.

“We would see the same parents and children in cycles every few months because the knowledge didn’t stick,” da Cruz said. “The programme there didn’t take poor people seriously.”

A mother and infant at a feeding centre in Dili. Nutrition remains a key challenge for this nation of 1.1 million 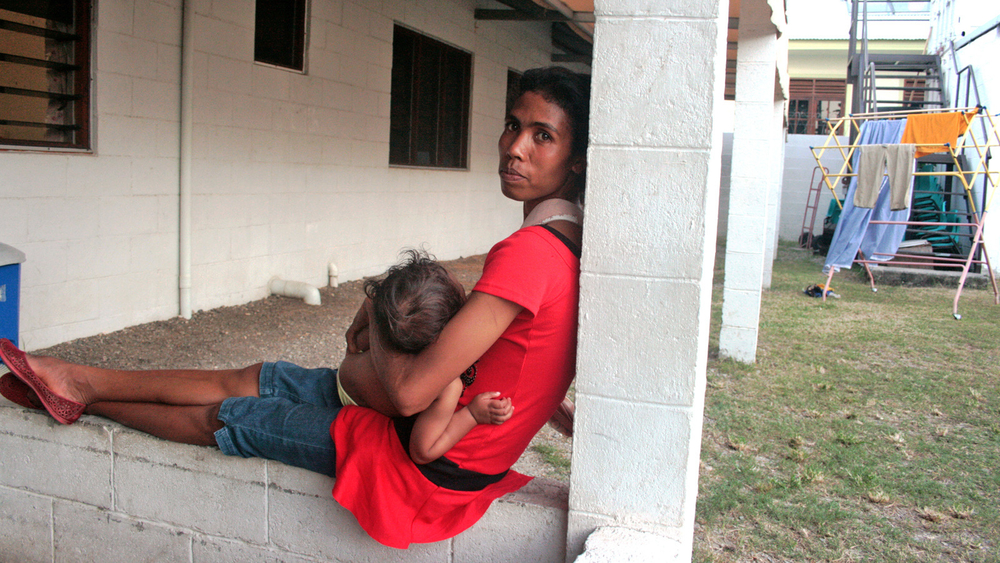 “The nutrition situation as it is now remains a silent emergency of loss of human capital,” said UNICEF’s Gao, adding that the government should institute a separate specific budget line for nutrition as an investment in the country’s future.

The 2014 national budget notes that malnutrition remains a major issue, and points to contributing factors such as “poor education regarding the benefits of nutrition, as well as cultural attitudes, such as the overemphasis on staples.” The budget increased spending on the nationwide school feeding programme from 15 to 25 US cents per student per day.

“People talk today about Timor-Leste's weak capacity. But if you don't invest in human capacity now, you'll be saying the same thing in 20 years,” Gao explained.

“We have support from donors and a new campaign to end hunger,” said the Health Ministry’s Bosco, referring to the “Zero Hunger Challenge”, a UN-coordinated global campaign that includes the goal of “zero stunted children under two years of age”, which was recently launched in Timor-Leste.

“But the current government budget attention to nutrition is rather small. In order to achieve our goals to reduce stunting more, we will need more investment,” he said.

For da Cruz, Timor-Leste’s continued struggle with malnutrition is a tragedy underscored by inequality.

“I tell mothers that demanding access to the knowledge and services to raise a well-nourished child is part of being an equal citizen of this country,” she said.

“Making sure stunting ends in this country is a step towards equality in society,” she argued. “The government must start to take it seriously - this should no longer be donor-funded, but Timorese money.”

World Bank analysis has shown that malnutrition (and stunting) can impact GDP by contributing to weaker school performance and higher lifelong health costs, among other factors. “Good nutrition is a basic building block of human capital,” the Bank argues.

The Dili-based policy analysis organization Lao Hamutuk lamented in 2014 that while the government has been slowly investing more in areas such as health, “even with these increases, Timor-Leste still spends less than 2/3 as much on human infrastructure as other well-run developing countries.”

The UN World Health Organization and the Health Ministry are currently finalizing “food-based dietary guidelines” that will encourage the consumption of locally-sourced foods, injecting support into the domestic economy.

Domingas Angela Sarmento, maternal child health and gender officer with WHO Timor-Leste, explained: “The purpose of these guidelines is to instruct people how to eat according to nutritional standards and the food that is available locally.”

According to Gao, nutrition is “an extremely efficient investment” for Timor-Leste.

“If the country continues to not invest in healthy children, they are losing their future capacity,” she said.