Thousands of ethnic Somalis have been arrested and detained in an ongoing security operation dubbed Usalama Watch mainly in Eastleigh, a suburb of Nairobi often known as “Little Mogadishu” because of its predominantly Somali population. Usalama means security in Swahili.

The crackdown, which began on 2 April, came after a series of explosions in Eastleigh that killed six people and injured more than 20. Most of those arrested are being held at the Safaricom Stadium Kasarani, a popular national sports venue, which has now temporarily been converted into a police station.

The government says the security operation is aimed at arresting the perpetrators of the attack and weeding out sympathizers of the insurgent Al-Shabab militia, but Muslim and Somali community leaders, as well as rights activists, have vehemently opposed the move, arguing that it is another heavy-handed exercise unfairly targeting ethnic Somalis.


On 11 April, Human Rights Watch (HRW) said in a statement: “Kenyan police and other security agencies should stop arbitrary arrests and detentions, extortion, and other abuses against Somalis during security operations.” Earlier, HRW noted that the directive to make refugees in urban areas return to camps is in violation of a High Court ruling.

On 9 April, Interior Cabinet Secretary Joseph Ole Lenku told a press conference in Nairobi that some 3,000 people had been detained in the security operation, with 82 illegal migrants being deported to Mogadishu. The deportees were accompanied to Mogadishu by the Somali ambassador to Kenya, Mohamed Ali Nur Ameriko, who told IRIN that the deportees had chosen to return home to Somalia.

But according to HRW, “the government should also halt summary deportations and ensure that any undocumented Somalis are given the opportunity to file asylum claims.”

On 7 April, Ole Lenku told his Somali counterpart Abdullahi Godah in a meeting in Nairobi that all undocumented Somali refugees arrested in the operation will be deported.

"People who are definitely seeking asylum in Kenya, who are refugees in Kenya - we agreed during the tripartite agreement reached in November that their return should be voluntary. So all we can do is to keep engaging the government - which we are doing consistently"

Among those detained are refugees who have been returned to Dadaab refugee camp in eastern Kenya.

In late March, Ole Lenku ordered all refugees residing outside the designated refugee camps of Kakuma and Dadaab to return to their respective camps with immediate effect.

“There are no other designated refugee camps outside these areas. Any refugee found flouting this directive will be dealt with in accordance with the law. Consequently, all refugee registration centres in urban areas - Nairobi, Mombasa, Malindi, Isiolo and Nakuru - are hereby closed,” he stated.

In an interview with IRIN, UNHCR Kenya spokesperson Emmanuel Nyabera said the agency is in discussion with the government to access those arrested.

Nyabera also reiterated that returns to Somalia should be voluntary. “People who are definitely seeking asylum in Kenya, who are refugees in Kenya - we agreed during the tripartite agreement reached in November that their return should be voluntary. So all we can do is to keep engaging the government - which we are doing consistently.”

UNHCR had in an earlier press statement urged “law enforcement agencies to uphold the rights of all those arrested and to treat them in a humane and non-discriminatory manner.”

The statement added that UNHCR had “sought access for itself and its partners to the detained refugees and asylum-seekers. This access will allow UNHCR to properly identify refugees, asylum-seekers and others of concern. It will also allow the agency to provide assistance to the detainees and obtain their release where appropriate.”


According to Yusuf Hassan, member of parliament for Kamukunji constituency within Eastleigh, the comparison of the area to Mogadishu is unjustified as it implies it is an outpost of the Somali republic and not part of Kenya. This negative perception could be part of the reason Somalis feel unfairly targeted.

“We support any operation that will weed out all kinds of criminals but what we are against is the nature of the operation. The government needs to adopt smart policing, intelligence gathering and fighting corruption within the police force [rather] than targeting [a] specific community,” Ahmedkadar Ali, a Somali Kenyan blogger, told IRIN.

“Somalis have been the scapegoat for police failure. Corruption is the biggest obstacle to [a] stable Kenya security-wise. What the police are doing is a short-term, reactionary strategy that will yield nothing.”

On the interior security ministry twitter handle Ole Lenku said the arrests have been made across the country and not in Eastleigh alone. “Let the criminals escape to other countries. Our exercise is to secure Kenya,” he added, noting that a “state of lawlessness has existed in Eastleigh for more than 20 years.”

Commenting on the large presence of Somali refugees residing in Eastleigh instead of in designated camps in Dadaab or Kakuma, Ali said: “Refugees, Somalis or otherwise, can live anywhere provided they comply with the law of the land. Some refugees have mandates from relevant UN agencies to live in major towns. If not, refugees will do anything to make [it] to the cities, thus corruption.”

Indeed, corrupt security forces have often been blamed for infiltration into the county by Al-Shabab insurgents.

Police inspector-general David Kimaiyo warned his forces against graft on Twitter stating: “We’ve put proper mechanism to fight corruption and those who’ll be caught receiving and giving bribes during [the] operation will face the law.”

Sheikh Mohamed Ibrahim Shakul, a Kenyan Somali community leader, accused the government of indiscriminately arresting the elderly, women and children. There were also claims of looting.

The member of parliament for Wajir East constituency in northeastern Kenya, Abbas Mohammed, added  that the exercise is “inhumane, and it’s actually not in agreement with the Geneva Convention. Even if these guys are foreigners, even if they’re refugees, what the Kenyan police is doing is actually not fair.” 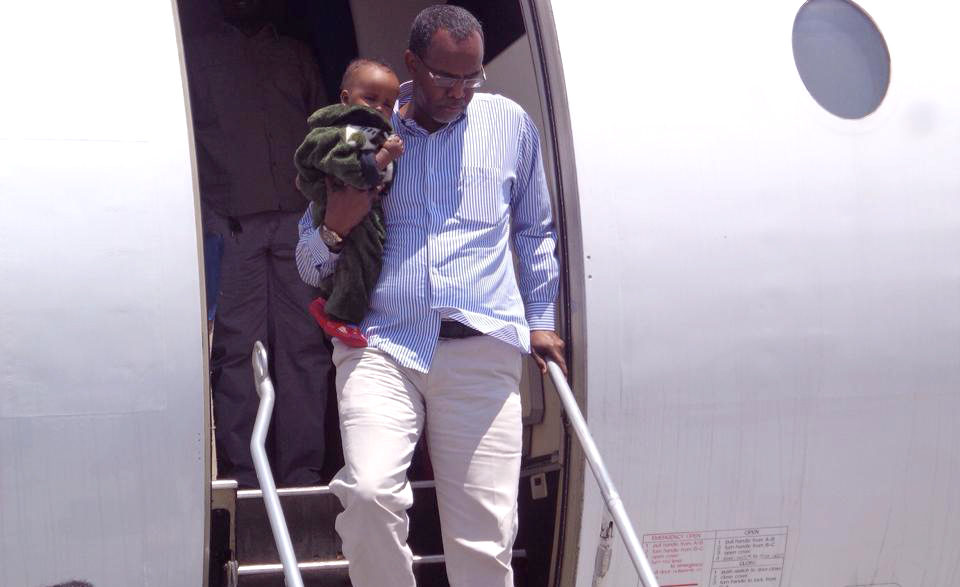 Nimo Nur Hajji, 25, who said she had arrived in Nairobi about two weeks ago for treatment, was among the deportees. She spoke with IRIN on the phone while in custody at Jomo Kenyatta International Airport detention centre an hour before she was deported to Mogadishu.

“I came from Garowe [Puntland’s administrative capital] for medical purposes. I had an appointment with a doctor on 15 April but I am being forced to leave the country. This is not my choice,” Hajji said.

She complained about the cold weather and hunger during her three days of “detention” at the Kasarani stadium. But according to Ole Lenku, the stadium is being used, “for screening suspects only and they do not spend the nights here. It has also been gazetted as a police station. Those suspects found innocent are released immediately.”

The Kenya Human Rights Commission noted that it had in the past week, “received multiple complaints of violations by state security agencies in the ongoing police operation. The complaints include arbitrary arrests, extortion, theft and looting of homesteads, sexual harassment, arbitrary detentions, illegal renditions, torture, inhuman and degrading treatment.”

While KHRC officers were denied entry to Kasarani, they stated that they have got information “which establishes patterns of conduct by the Kenya Police that constitute serious violations of the constitution and international human rights standards and principles.” In a press conference on 10 April, the government denied the KHRC claims.

Earlier, cabinet secretary Ole Lenku had stated that, “the [security] operation will be done within the law and so far no reports of bribing or the rape allegations have been established. This is the country’s number one priority.”

Kenya has experienced an increased number of Al-Shabab attacks since the 2011 deployment of its troops to Somalia.

In September 2013, a shocking Al-Shabab assault on an upmarket shopping mall in Nairobi left at least 67 people dead.