Zannah Bassar, a Muslim woman living in the Central African Republic (CAR) capital, Bangui, has a simple message for the international community - she wants to be evacuated.

“I was born in this district,” she told IRIN this week, “but my home has been wrecked. I’ve been sleeping in the street for the past month and I want to send an SOS. I want to go somewhere else.”

Bassar and about 3,200 fellow Muslims are trapped in a kilometer-long district of Bangui known as PK12. Half a dozen other Muslims IRIN interviewed in the same district this week all said they wanted to leave.

“The people in PK12 have a deep desire to get out of there,” said Jacques Seurt, head of mission for the International Organization for Migration (IOM) in CAR, which has stopped chartering rescue flights out of the country for lack of funding.

“They are under constant threat from the anti-balaka as are other Muslims in the west of the country.”

The country’s Muslims have been the target of reprisal attacks because the Seleka rebel alliance that toppled the government in March 2013 was predominantly made up of Muslims and committed widespread atrocities in many parts of the country.

The UN Refugee Agency (UNHCR) reported on 25 February that “more than 15,000 people in 18 locations are surrounded by armed groups across the west of the CAR… and at high risk of attack,” adding that most of these people are Muslim.

"Areas we are particularly worried about include the PK12 neighbourhood in Bangui and the towns of Boda, Bouar and Bossangoa," a spokesman said.

Anti-balaka have been firing grenades at PK12 from surrounding hills and infiltrating the area, wounding several people, said Peter Neussl of the UN Office for the Coordination of Humanitarian Affairs (OCHA).

On 19 February, UNHCR reported, the anti-balaka attacked a convoy of people trying to escape from PK12. All 21 men in the convoy were killed, leaving 119 children and 19 women, who fled to a nearby village.

Security has improved in Bangui since December when around 1,000 people were killed there in a few days, but attacks are still happening almost daily. On 22 February three Muslims were dragged from a taxi and shot dead at an anti-balaka road block, two days later five men were killed in the PK5 district and on 26 February four Muslim children were kidnapped (an OCHA worker helped negotiate their release two days later).


Until recently a high proportion of the Muslims in CAR were Chadians, or of Chadian descent. In the past two months Chad’s government has been organizing large convoys, escorted by the Chadian army, to evacuate its citizens from CAR, but on 20 February, after the attack on the convoy from PK12, N’djamena announced an end to these operations and declared that 99 percent of its citizens that wanted to leave CAR had left.

"We shall be judged by the effectiveness of our actions, not the elegance of our principles. We don’t want to be complicit with ethnic cleansing but nor do we want any share of the blame for ethnic extermination"

Many Muslims interviewed by IRIN at PK12, Bouar and Bossangoa in the past two weeks said they want to go to Chad, as they have relatives there, but this option is becoming more difficult, and aid agencies are under increasing pressure to find other options.

Up to now aid agencies’ involvement in evacuations from CAR has mainly been limited to work by IOM, which has chartered flights for around 5,000 third country nationals, and UNHCR, which has assisted some refugees with travel.

OCHA is now considering plans for moving populations within the country.

Facilitating a division of the country on religious (and largely ethnic) lines will be controversial for aid workers. Amnesty International said last month that nobody wanted a debate on the issue.

But some officials feel it can no longer be ignored.

“We shall be judged by the effectiveness of our actions, not the elegance of our principles,” a senior aid worker said confidentially. “We don’t want to be complicit with ethnic cleansing but nor do we want any share of the blame for ethnic extermination.”

Peter Neussl explained current thinking: “We want to give people options for relocation. We are exploring possibilities inside Bangui of moving people to places that would be easier to protect.”

Transferring people within Bangui would be easier logistically, he said, as it is hard to find trucks and drivers who will take the risk of driving Muslims long distances through hostile territory, even with an armed escort.

Apart from the ill-fated convoy from PK12, other trucks have also come under fire or had grenades thrown at them in CAR in recent weeks. Five people were killed in one such incident and more than 20 in another, while the anti-balaka attacked a convoy of 89 vehicles on 16 February, wounding 12 civilians, although the attack was beaten off by the escort of peacekeepers.

“In the long term, people want to live in their home areas in security,” Neussl said, “but as a mid-term solution we are considering moving Muslims from PK12 to safer towns outside Bangui. We would have to be very careful about the possible impact of such transfers on the host population.”

Neussl emphasized that relocation should be a last resort. 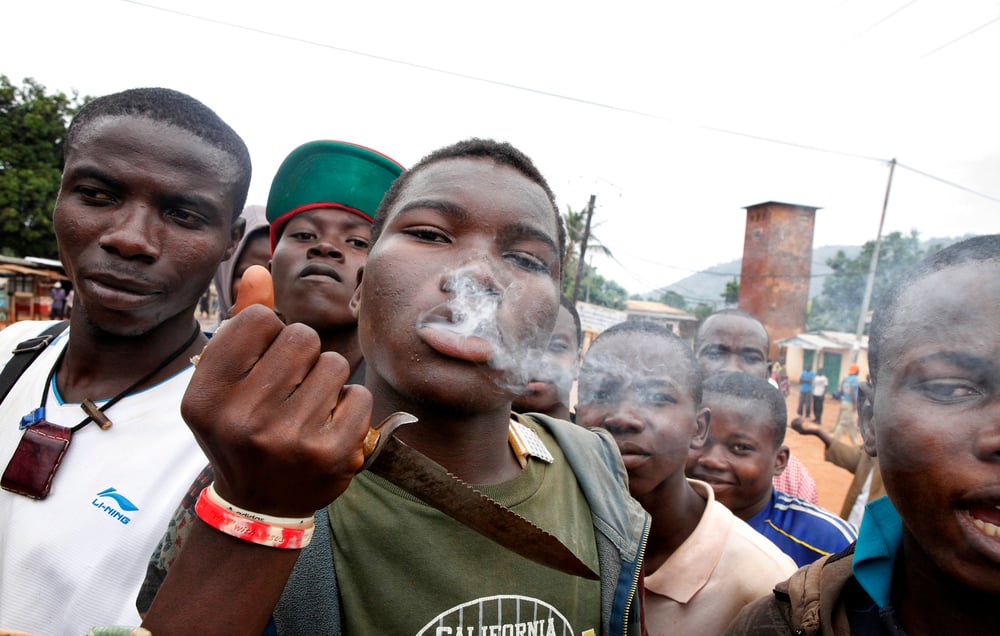 UN Secretary-General Special Representative in CAR Boubacar Gaye told IRIN: “The secretary-general made very clear before the [Security] Council this week that we should do our utmost to stop the exodus of the Muslim population, and this is also the understanding of [CAR’s] Madam President Samba-Panza.

“Security is the first priority. The option of moving people under the international community’s escort is an option, one of the planning options.”

He stressed that any such move must be fully coordinated with the national authorities and fully explained, and that it would be “very dangerous for the future of the country to have all the Muslims in one part of the country and a de facto partition”, as this would be “sowing the seeds for future confrontation”.

The exodus of most Muslim traders and cattle herders from western CAR is already having serious economic effects, with meat and other products now scarce in the markets and concerns that supplies will deteriorate further.


The UN’s senior humanitarian official Valerie Amos canvassed people’s views about relocation during her visit last week to Bossangoa, a town about 350km north of Bangui where some 1,200 Muslims are living in and around a school, l’Ecole de Liberté.

“If there were peace and security all the Muslims would come back… but the Christians have made it clear they don’t want to live with Muslims in this country. Wherever they find Muslims they will kill them and cut them into little pieces.”

A women’s group leader, Kadjidja Hassan, said people did not want to go to Chad because they had been in CAR a long time, but she added that they have now been in the camp for five months, and: “Muslims have been attacked in all the villages around Bossangoa. A Muslim can’t move more than one kilometre from this site. We’re all crammed in here, and our husbands can’t do anything. How can we live in Bossangoa?”

With Chadian African Union troops providing security, there have been almost no killings of Muslims in Bossangoa in the past two months, but nearly all the camp dwellers IRIN spoke to said they needed more security, although not all said they wanted to leave.

A group of men accused the district administrator (prefect), who was with the visiting delegation, of distributing weapons to the anti-balaka and said that if she were removed from her post they could stay on in Bossangoa. The prefect denied the accusations.

The typical view from most people seemed to be that unless they have security, by which they appeared to mean free movement outside their little ghetto, they would prefer to leave Bossangoa.

Although aid agencies are providing water and basic rations, living conditions are worsening, as the supplies that many people brought to the camp when they abandoned their shops are now finished.

Zannah Bassar, a Muslim woman living in Bangui and about 3,200 fellow Muslims are trapped in a kilometer-long district of Bangui known as PK12 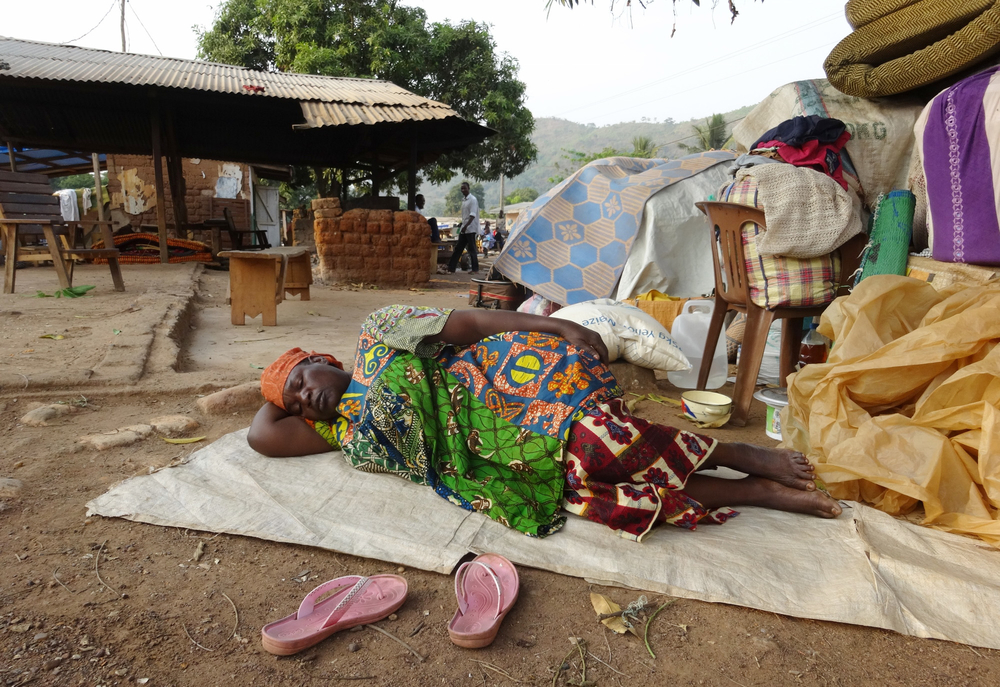 IRIN interviewed Muslims at a site around a mosque in Bouar, near Cameroon, on 14 February. The “camp president” there said many at the site wanted to stay in the area but most other interviewees said they wanted to leave, as did most of the Muslims interviewed at a displacement site in Baoro, 50km away.

At both sites Muslims said they could not walk around the town as the anti-balaka would kill them.

The Muslims’ attitude may have changed in Bouar since the French military mission (Operation Sangaris) deployed about 300 men to the area on 15 February.

The situation at Bossangoa, Bouar and PK12 is not replicated everywhere in western CAR. UNHCR said on 25 February that “in some towns like Paoua (near the Chadian border) and in some quarters of Bangui, communities continue living and working together, although atrocities are frequently committed.”

So far there has been much less communal violence in the centre and east of the country where the Muslim population is larger. Nationally the proportion of Muslims was estimated at around 15 percent, but it is now lower.


International security forces are to be reinforced in CAR, with 1,000 European Union peacekeepers due to be deployed soon. International Crisis Group analyst Thierry Vircoulon argues that more police, rather than troops, should be the priority.

The government is currently deploying only about 150 gendarmes (with donor funding) and even they man checkpoints alongside the anti-balaka, while the international police forces are well below the mandated level.

Winning public support in the battle against the anti-balaka may be a long process, as they are seen by many of the population as liberators after their fight against the largely Muslim Seleka rebels.

Most of the international security forces have tended to avoid confronting the anti-balaka, who can cause major disruption, and have closed down the airport on several occasions.

On 25 February IRIN passed the corpse of a Muslim man that had been lying at a crossroads in Bangui for several hours. A group of youths standing nearby said they had killed the Muslim with rocks and machetes because he had crossed a “red line”.

Peacekeeper patrols had passed the spot several times that morning but the youths were still at their checkpoint.