Migrants in Morocco continue to suffer human rights abuses at the hands of security forces and resentful locals, despite migration policy reforms that were welcomed by local rights organizations when they were announced five months ago.

Morocco’s recent efforts to set up an asylum system that, for the first time, recognizes refugees, as well as plans to regularize a limited number of undocumented migrants and halt summary deportations to Algeria, have been lauded as steps in the right direction. But reports continue to emerge of migrants facing routine violence, particularly sub-Saharan Africans trying to reach Ceuta and Melilla, the tiny Spanish enclaves that dot northern Morocco’s Mediterranean coast.

A group of eight local and international NGOs that work with migrants sent an open letter to the Spanish ambassador to Morocco on 13 February detailing migrants’ accounts of abuse at the hands of Spanish and Moroccan security forces. The letter documents incidents in which migrants reaching Spain were beaten by the Guardia Civil, Spain’s police force, and summarily expelled back to Morocco. It also describes violent arrests of migrants by Morocco’s security forces.

One of the letter’s signatories, Caritas, which runs a centre providing emergency assistance to migrants in Rabat, Morocco’s capital, noted that over two months they had treated 24 migrants for injuries sustained during such arrests.

The letter referred to an incident on 6 February in which hundreds of migrants attempted to reach Ceuta. As the majority of the migrants stormed the fences of the land border, a smaller group took to the sea, trying to swim around the breakwater that forms part of the international border. At least 12 drowned. Caritas stated that dozens of migrants, who were later arrested en masse and forcibly relocated to Rabat, told them that “the Spanish security forces targeted the boats and the people themselves with rubber bullets and tear gas as they called out for help, resulting in the several deaths by drowning”.

“They fired tear gas into the water as people were swimming for their lives,” Leo, a Cameroonian man who witnessed the incident, confirmed to IRIN.

The Guardia Civil initially denied using rubber bullets, but Spanish Interior Minister Jorge Fernandez Diaz admitted in a speech to parliament on 13 February that they had fired rubber bullets towards migrants in the sea, although he described them as warning shots and denied that they had caused the deaths.

Migrants’ allegations of systematic violence at the Ceuta and Melilla borders are consistent with the findings of a Human Rights Watch report released on 10 February. The report documents violent raids on the migrants’ makeshift camps, theft of money and identity papers by the police, and mass arrests without due legal process. Marc Fawe, the UN Refugee Agency’s (UNHCR) spokesperson in Morocco, also confirmed “institutionalized violence” against migrants in and around Ceuta and Melilla. 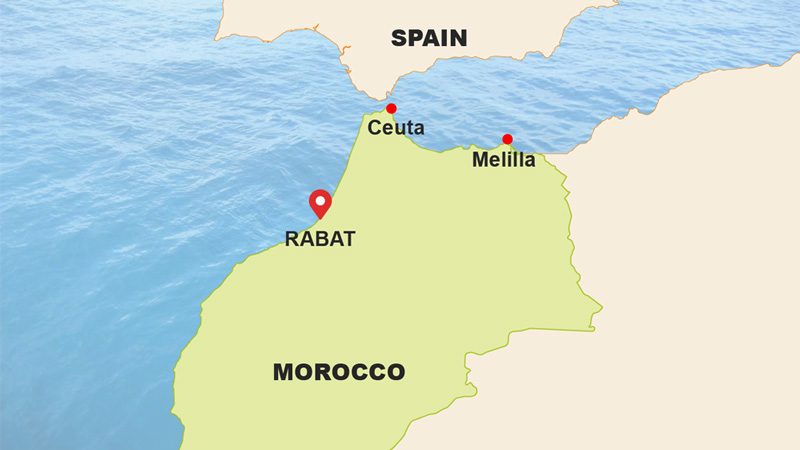 Morocco has responded by pointing to its progress on migration issues since it announced reforms to its migration policy in September 2013. Government spokesperson and Communication Minister Mustapha Khalfi noted in a press statement, “Three new laws have been adopted to deal with the question of migration: a law against people smuggling, a law dealing with residency for foreigners and a law on the right to asylum.”

Since September, 580 asylum seekers have been awarded refugee status. This is the first time people determined by UNHCR to be refugees have been recognized as such in Morocco. They have been given refugee identity cards and will next receive residency papers allowing them to work and access some social services, including limited free health care. In addition, 25,000 irregular migrants are expected to benefit from an “exceptional” granting of residency papers in 2014. Eligible candidates include spouses of Moroccans, those with work contracts, non-nationals who can document having lived in Morocco for at least five years and those suffering from severe medical conditions.

The Moroccan government also says it has halted the practice of dumping undocumented migrants over its desert border with Algeria.

Anke Strauss, chief of mission for the International Organization for Migration (IOM) in Rabat, cautiously welcomed the government’s unexpected shift “from being completely security-focused to a more human rights-based… approach.” Strauss noted that, away from the flashpoints of Ceuta and Melilla, “there are certain practices and human rights abuses that have stopped. We no longer see - at least here [in Rabat] - large numbers of summary arrests and deportations to Algeria”.

Migrants on the streets of Rabat agreed. “Before, the police hassled everyone, but now much less,” said Leo, within view of two policemen who barely glanced at the Cameroonian labourer.

However, according to both IOM and Caritas, over the past two months a new policy has seen mass arrests of migrants camped out near the Ceuta and Melilla borders, who are then forcibly removed to Rabat, Fez, Casablanca and Marrakech.

"They dragged us out of the sea, arrested us and brought us down to Rabat. They don't exactly ask your opinion"

Florent, another Cameroonian migrant, described his experience after being caught in an inflatable boat near Tanger, a Moroccan port town 35km across the Strait of Gibraltar from mainland Spain. “They dragged us out of the sea, arrested us and brought us down to Rabat,” he told IRIN. “They don’t exactly ask your opinion; you don’t get a choice.”

Of attempts to cross into Ceuta, Melilla and to the mainland he told IRIN, “It’s the same story: either we make it over the border and they [the Guardia Civil] throw us back, or they stop us before we get there, but we are always beaten.”

The migration situation in Morocco is complex. Not only is it a major country of origin for Moroccans migrating to Europe, it is also a crucial transit country for sub-Saharan Africans intent on the same goal. Many of them find themselves at a dead end as the governments’ efforts to prevent illegal border crossings into Spain have been increasingly successful. Khalfi, the government spokesman, claimed that Morocco had “in recent years reduced illegal migration by boat by 93 percent”.

Morocco has signed a slew of accords with EU countries aimed at strengthening Europe’s borders. In 2012, Rabat and Madrid signed the Readmission Agreement and Police Cooperation Agreement which allow security forces on both sides of the border to work together to eject migrants back into Morocco from Spanish territory.

“I think Morocco is in a particularly difficult situation with its agreement with Spain to try to keep people in the country,” Strauss acknowledged.

While African migrants are increasingly stopped from reaching Europe, they continue to arrive in Morocco from all over the continent. The Ministry of Interior estimates there are between 25,000 and 40,000 irregular migrants in Morocco, while UNHCR says it saw a tripling in the number of asylum seekers in Morocco in 2013, with most coming from Côte d'Ivoire and Syria.

The desperation of longer-term migrants in Morocco like Leo and Florent makes them prepared to take ever greater risks to leave. “I have been living on the streets for six years,” said Leo. “I have to keep trying.”

Florent feels the same way: “We have no money for boats with motors so we just take inflatable boats and paddle ourselves. We don’t cry because we are men, but we are broken.”

Both men understand the dangers of these illegal sea crossings, and have experienced violent arrests at the land borders, but are motivated to keep trying by their hope of earning an income in Europe.

In Morocco’s main cities, economic migrants like Leo and Florent compete with locals for a limited number of manual jobs. They say they experience racism and violence on a daily basis.

Even for the 10 percent of asylum seekers who have so far received refugee status, a tiny fraction of Morocco’s total migrant population, life in their host communities is difficult and integration almost impossible.

On paper, Bernadette* is one of Morocco’s refugee success stories. She received one of the first refugee cards in September 2013 and will automatically be given residency once the fledgling system is up and running. The Moroccan government gives her some financial assistance, and she sells West African food to other migrants outside the Fondation Orient-Occident, a local migrants’ charity, courtesy of a microcredit loan she received from UNHCR. But she still struggles to afford her basic necessities, suffers racist abuse and, heavily pregnant, fears for the future of her child.

Bernadette fled Ivory Coast amid the post-election violence of 2010 and 2011, which claimed the lives of her husband and son. After arriving in Morocco in 2012, she stayed with her husband’s sister, who had already sought refuge in Rabat. But last year, her sister-in-law was killed by a gang of youths in a racist attack.

“She already had a tumour in her head which had made her weak, but when they beat her in the head she died,” Bernadette recalled.

“With this black skin, when you go to hospital they won’t deal with you,” said Bernadette. “I know a woman who gave birth in the waiting room.”

Bernadette does not know the whereabouts of the father of her child, who disappeared after saying he was going to try to reach Spain by sea. So she concentrates on her small business.

“If I manage to sell a little, I eat and I pay the rent. I will be giving birth soon, and I’ll stay at home for a month, and then I’ll have to come back out and start up again,” she said.