Read about what we achieved.
BANGUI

On 10 February, Gen Francisco Soriano, commander of Sangaris, the French peacekeeping mission in the Central African Republic (CAR), condemned the anti-balaka militia as the main enemy of peace in the country, and vowed that the mission would concentrate its efforts against them. His statement came just before Amnesty International charged international peacekeepers with having failed to prevent the ethnic cleansing of Muslim civilians in western CAR.

This IRIN briefing looks at the threat posed by the anti-balaka to Muslims and to the CAR population in general.

Who are the anti-balaka?

Their leaders’ identity, their chain of command and their political programme are all unknowns, he told a meeting of community representatives in Bangui. At the same meeting, his African Union counterpart, Cameroonian Gen Martin Tumenta (commanding MISCA, the AU mission in CAR), expressed frustration that Bangui’s citizens have not been providing the force with more information about the anti-balaka.

An audience member’s claim that calls to a MISCA hotline number tend to go unanswered prompted an angry response from Tumenta. “So you’re calling us useless?” he said before walking out of the meeting.

“Balaka” is the Sango word for machete. Some sources say it is also alludes to the French for bullets of an automatic rifle (“balle AK”). Either way, “anti-balaka” roughly means “invincible”, a power purportedly bestowed by the charms that hang around the necks of most members. The term gained currency five or six years ago, when it was applied to self-defence units set up - in the absence of effective state security forces - to protect communities from attacks by highway bandits or cattle raiders.

Several rebel groups joined forces under the banner of the Seleka (“alliance” in Sango) forces in late 2012, and seized power the following March. “Anti-balaka” caught on as a generic term for those resisting the brutal Seleka (a word to which, since the alliance’s official disbanding in September 2013, the prefix “ex” has usually added).

Clashes in December 2013 between anti-balaka and the ex-Seleka led to reprisal attacks in which about 1,000 people died in Bangui. The anti-balaka have been largely responsible for driving the ex-Seleka from many of their bases in western CAR.

What is the religious connection?

Most Seleka members were Muslim, chiefly because Islam is the more prevalent religion in the marginalized northern areas where rebel groups sprang up. Seleka members committed widespread atrocities after seizing power in March 2013, including killings, large-scale arson and rape.

More recently Muslims, many with no connection to the rebels, have been targeted in reprisals by anti-balaka and civilians. According to Amnesty International, such attacks have led tens of thousands to leave CAR in “an exodus of historic proportions”.

According to Human Rights Watch (HRW), “the anti-balaka militias are increasingly organized and using language that suggests their intent is to eliminate Muslim residents from the Central African Republic.”

“At this rate, if the targeted violence continues, there will be no Muslims left in much of the Central African Republic,” Peter Bouckaert, emergencies director at Human Rights Watch, said in an emailed statement.

“People whose families have peacefully lived in the country for centuries are being forced to leave, or are fleeing the very real threat of violence against them.”

A self-styled spokesman for the anti-balaka, Sebastien Wenezoui, has said that the movement is fighting to defend Christians. Most of its recruits are from Christian or animist communities. But Christian and Muslim leaders have insisted that the neither anti-balaka nor ex-Seleka can credibly claim to represent either faith.

What are the anti-balaka’s links with the army?

After the coup, many members of the former government army, known by its French acronym, FACA, joined the anti-balaka. In the prefecture of Lobaye, all anti-balaka commanders there came from FACA, residents told IRIN.

People whose families have peacefully lived in the country for centuries are being forced to leave, or are fleeing the very real threat of violence against them

On 14 January, a few days after post-coup president Michel Djotodia stepped down, hundreds of men, many of whom had fought as anti-balaka, showed up for duty at FACA headquarters. Hundreds more have since appeared at morning assemblies. How many of them were bona fide soldiers before the coup, and how many still consider themselves members of anti-balaka, is not clear.

Anti-balaka spokesmen have called for members to be integrated into the army “with appropriate rank” or given demobilization packages.

Earlier this month, minutes after newly installed interim president, Catherine Samba-Panza, addressed an inaugural parade of re-launched FACA, a dozen of them set on a suspected ex-Seleka in their midst and kicked him to death, in full view of international media. No arrests have been made.

In Lobaye, the anti-balaka - many wearing military uniforms but without FACA insignia - man roadblocks beside gendarmes. Amnesty International reports that the anti-balaka occupy FACA barracks in parts of the country. Asked what they think about the anti-balaka, a group of FACA soldier told IRIN: “They are our brothers. We are together against the Seleka.”

What is the structure of anti-balaka?

They are said to consist of many groups, including at least 10 in Bangui, based on the city’s arrondissements, and many others across the country. There have been no reports of anti-balaka groups fighting each other.

Two ministers in the government of ousted president Francois Bozize, Patrice Edouard Ngaissona and Joachin Kokate, claim to be the anti-balaka’s national-level political and military coordinators, respectively. Bozize has denied having a controlling hand over the group.

Ngaissona returned to Bangui from exile in December 2013 and has since upstaged Kokate in the media. Both he and Ngaissona have told media that the “token” anti-balaka representative in the new government, Leopold Narcisse Mbara, minister for youth and sport, was not the movement’s choice.

Following the condemnation of anti-balaka by Soriano, Ngaissona said the movement is committed “to pacification and normalization in CAR”.

What threat do they pose to the population?

According to HRW, the anti-balaka are targeting Muslims in “a relentless wave of coordinated violence that is forcing entire communities to leave the country.”

HRW and Amnesty International have both documented atrocities, including five massacres in western CAR last month, in which at least 180 Muslim civilians were killed, as well as other killings in Bangui.

Youth at Bangui´s estate PK9, throwing stones at a convoy of Chadian IDPs trying to flee the country 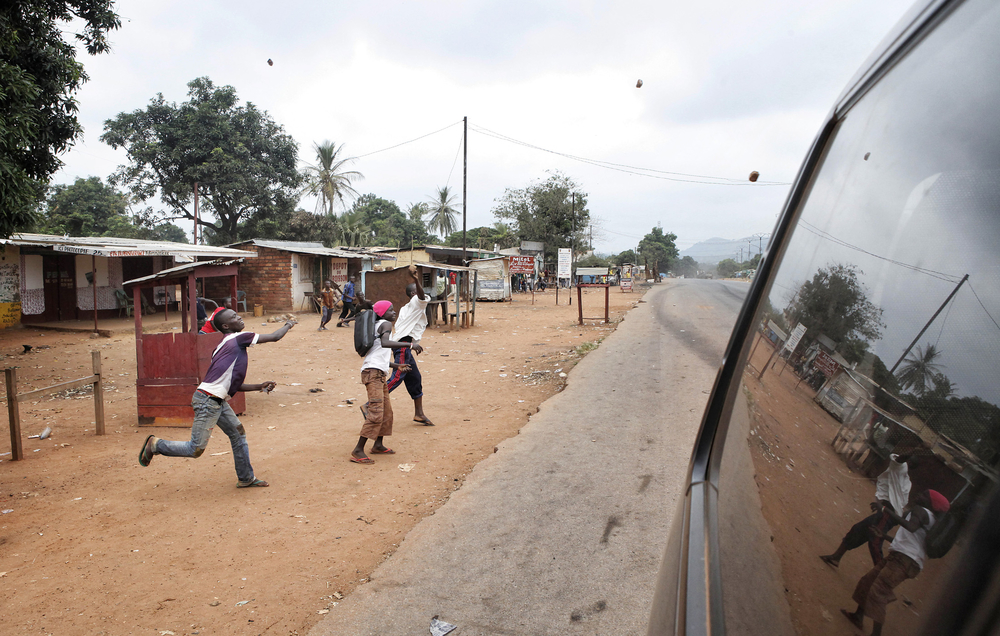 “PK12, PK13, Miskine, and Kilo 5 - all former Muslim strongholds in Bangui - are now ghost towns, devoid of Muslim residents. Some anti-balaka militants have told Human Rights Watch that they would kill any Muslims remaining in these neighbourhoods.”

“Whether the anti-balaka leaders are pursuing a deliberate policy of ethnic cleansing or exacting abusive collective punishment against the Muslim population [in response to the Seleka’s atrocities], the end result is clear: the disappearance of longstanding Muslim communities,” HRW’s Bouckaert said.

In the town of Mbaiki, one anti-balaka leader told IRIN that young people with appropriate skills would be selected to take over shops abandoned by Muslims.

According to aid workers, most main roads in the west of the country are controlled by anti-balaka. Hundreds of aid-delivery trucks remain stuck at the Cameroonian border, their drivers too scared to proceed into CAR, where food security is seriously under threat.

The peacekeepers are deploying more widely, but currently the French presence outside Bangui is limited to a few towns. The 1,600-strong mission says it has units at Bossangoa, Berberati, Yaloke, Boda and Mbaiki in the west (although none were at Mbaiki on 9 February) and at Bambari and Ndele in the east. MISCA has deployed nearly half its 5,500 troops and police outside Bangui, mainly in western CAR.

Both Soriano and Tumenta dismissed suggestions at the 10 February meeting that they should negotiate with the anti-balaka. But the signs are that they are not yet waging an all-out war on the movement. Aid workers report an overall lessening of tension in Bangui in the past 10 days, with some targeted killings but fewer firefights.

Comments by community leaders at the 10 February meeting suggested they would prefer the peacekeepers concentrate on disarming the residual Muslim parts of town, a few small enclaves. Then people would return from the vast displacement camp at the airport, it was argued.

Nothing was said of the Muslims’ fate. Soriano argued that disarmament is happening little by little and spoke of 4,000 traditional weapons, 300 hunting rifles and many grenades collected.

One speaker asked who would guarantee her security if she informed on the anti-balaka. No speaker, apart from religious leaders, denounced anti-balaka abuses.

What is the government’s attitude?

President Samba-Panza has resisted pressure from the anti-balaka to include them in government, apart from the sport minister. By contrast she has included three ex-Seleka ministers in her 20-person cabinet.

In her public addresses, she has spoken openly of the need to lay down machetes and other weapons and for communities to live in harmony. But she also said that not all the anti-balaka and not all the ex-Seleka are rogues.

Asked about the government’s policy for demobilizing the anti-balaka, a defence ministry source said the sports minister would ask them to comply.

The president has called on the international community to help CAR reconstitute its security forces. So far, France has agreed to pay for 150 gendarmes, recommended by the government, who will be armed and will collaborate with the peacekeepers.

Soriano said the government needs to draw up a list of the “real” FACA before the international community can consider paying them. The FACA was increasingly dominated by members of Bozize’s ethnic group, and the government may wish to redress that bias.