In the decades since a brutal military crackdown in Argentina in the late 1970s, when thousands of disappearances occurred, the country has been driven by activist pressure to become a global leader in forensic anthropology, a field that holds lessons for other post-conflict countries trying to identify missing people, say experts.

“The trauma of disappearance is universal - not to know if your loved one is alive or dead, not to have a grave - that grief is universal for families everywhere,” said Luis Fondebrinder, a forensic anthropologist with the Argentine Forensic Anthropology Team (EAAF), an NGO based in Buenos Aires, the capital, that investigates large-scale disappearances.

Forensic anthropology - combining the sciences of archaeology and human biology to identify human remains in criminal investigations - has been used in Argentina to locate mass burial sites in the provinces of Buenos Aires, Tucuman, and Cordoba.

At the urging of human rights groups, Argentina was the first country to employ the technique on a large scale to investigate human rights abuses under a military dictatorship from 1976 to 1983, in what became known as the “Dirty War”. Scientists have so far exhumed and identified around 600 of thousands of skeletons, using DNA samples provided by the families of missing persons.

“Enforced disappearances are a denial of the person who disappeared... it is a human rights violation that affects not only the rights of the person who disappeared, but also the rights of their relatives,” Ariel Dulitzky, the chair of the Working Group on Enforced or Involuntary Disappearances (WGEID) in the UN Office of the High Commissioner for Human Rights (OHCHR) told IRIN. The UN has stressed the importance of forensic anthropology in helping citizens fight such disappearances.

Worldwide, nearly 54,000 unsolved cases have been submitted to the WGEID since its inception in 1980, according to the International Coalition Against Enforced Disappearances (ICAED), a global network of 50 NGOs that researches incidents and works to raise awareness of this crime.

Human rights groups say many cases go unreported because families feel that “if investigated… the information might be used against them, and that the same disappearance might happen to any [other] member of the family,” said Candy Diez, a research and documentation officer with the Asia Federation Against Involuntary Disappearances (AFAD), a network of more than 10 human rights groups based in the capital of the Philippines, Manila. The organization says there are at least 7,400 unsolved disappearances in Sri Lanka, the Philippines, Nepal, Timor-Leste, Indonesia, Thailand and Bangladesh.

“Silence and fear shroud enforced disappearances. In several cases, individuals who reported a disappearance were themselves detained,” said a 2013 paper on Syria by the UN OHCHR, noting that the missing include doctors suspected of treating anti-government protesters.

A story only bones can tell

Exhuming and identifying the dead can take anywhere from weeks to years, depending on a government's willingness to cooperate, the type of records kept by alleged perpetrators, the geographic location of bodies, and obtaining DNA samples - as well as the laboratory capacity to analyze them - according to WGEID and the Argentine EAAF.

Inside the laboratory of the Argentine Forensic Anthropology Team 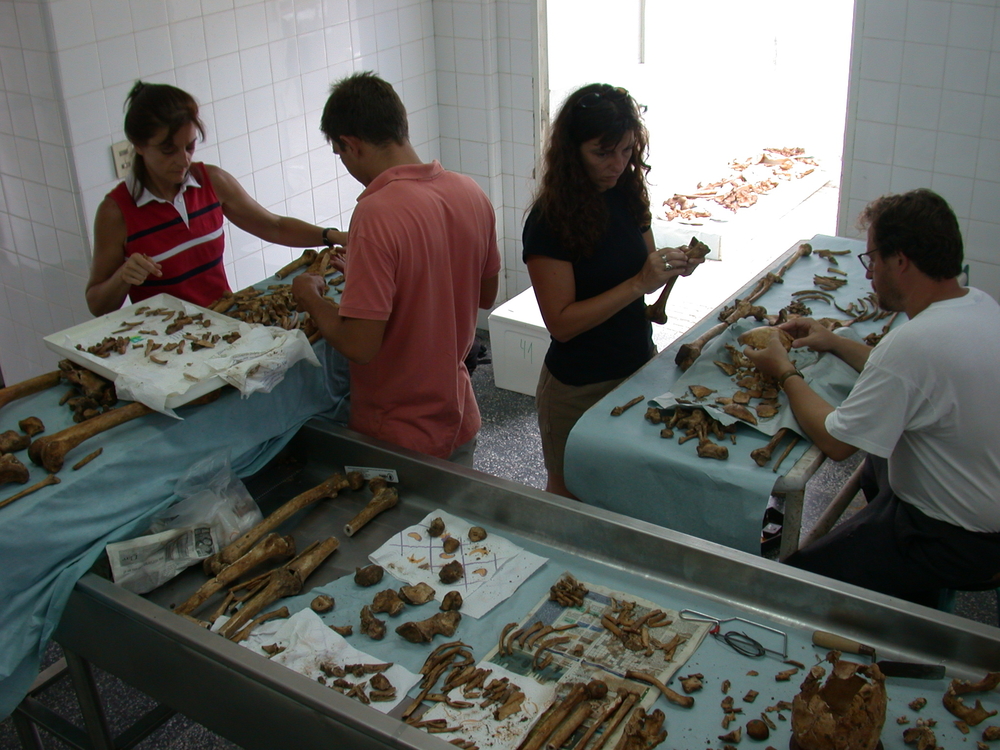 The organizations use government files to identify the mass graves closest to where a person was last seen, and archaeological techniques to analyze the soil to detect past activity at suspected burial sites, before locating and digging up remains.

Information from surviving family members is key. “You need circumstantial information, how the person disappeared, and also physical and biological information, including any bone fractures, how were the teeth, etc.,” said Fondebrinder, who added that many diseases can alter bones. Scientists then construct a biological profile based on the remains, which are often skeletal, using bone size and shape to estimate a person’s age, sex, and stature.

The story of a person's life helps to find them in death, say forensic anthropologists. “Science is not one hundred percent, usually we say it is the person 'beyond reasonable doubt',” Fondebrinder said. “Only with DNA [can we know the percentage of accuracy of our identification efforts]. Usually you say, ‘Yes, it is identified, or no [it is not]’.”

The bones can also tell how the person died, according to EAAF. The Simon Fraser University (SFU) Museum of Archaeology and Ethnology based in Vancouver, Canada, notes that if the person was hit with a blunt object, the skull could shatter or bones might fracture; sharp objects often make puncture marks, and a gunshot or knife wound can cause deep trauma in a small area.

The challenges of finding remains

Finding bones is not always straightforward, especially in cases where the alleged perpetrators have destroyed bodies or buried them in mass graves to cover up human rights violations, said EAAF, which searches for people on the official Argentine government list of some 10,000 registered as missing, but has only identified 600.

The UN WGEID reports resolving around 10,000 disappearances worldwide since it was founded in 1980, with 45,000 cases remaining open to date. “Sometimes you can only find small pieces of bones, or else there are hundreds or thousands of remains all mixed up,” said Dulitzky.

The Working Group's progress in resolving disappearances often depends on government cooperation, as forensic anthropology is a legal investigation that requires official consent. Without state cooperation, it can be next to impossible to find a missing person.

“Even where courts are willing and make findings against the police, [the] army or others, there is no effective remedy when the authorities refuse to cooperate,” said Brad Adams, in the Asia Division of Human Rights Watch.

While 93 of the 193 UN member countries have signed the International Convention for the Protection of All Persons from Enforced Disappearance, the UN lists only 42 that have passed national legislation to implement it.

Closing the circle of grief

Knowing what happened is fundamental if families are to have closure, said many forensic anthropologists IRIN interviewed in Argentina, who had often entered the profession because their parents had lost loved ones during the period of military rule.

“Many relatives, even if they know they will not be able to find the body, they want to know how the person was killed, when, and by whom,” said Dulitzky.

In Argentina, the trials of alleged perpetrators were broadcast. The government also made a public apology to the families of those who had disappeared, and paid reparations of US$200,000 per family. “[It] is one of the countries in the world that has achieved much in terms of finding the truth, seeking justice, and [recording the] memory [of the collective trauma],” said Fondebrinder.

But with only 6 percent of all officially recorded disappearances in Argentina solved, most of the families are still waiting for scientists to examine and identify the thousands of bone fragments stored in the EAAF laboratory.