I will support your work.
AIZAWL

A 1988 uprising against the Burmese military government left thousands of citizens dead and many parts of the country, including Chin, were heavily militarized. Like other ethnic communities in Myanmar, the Chin people bore the brunt of severe poverty and military rule, prompting many to flee across the 1,463km border into India’s Mizoram State where, according to a 2011 report by Physicians for Human Rights, approximately 100,000 of them were living.

“I was a student and took part in [the 1988] protests. The leader of the university told me to flee to Mizoram to protect myself. I have been here ever since,” said Robika Chingarong, 48, adding that he has never felt it was safe to return to Myanmar.

Research by the Delhi-based Institute for Peace and Conflict Studies (IPCS) in India argued that the majority of Chins were in Mizoram seeking economic opportunities, which others said was a symptom of the ongoing “social, political, religious, [and] ethnic... persecution” in Myanmar.

The United Nations lists Chin as Myanmar's poorest state, with at least 73 percent of the estimated 500,000 population living below the poverty line, compared to a national average of 25 percent. Food insecurity is a chronic problem and affects all nine townships in Chin. 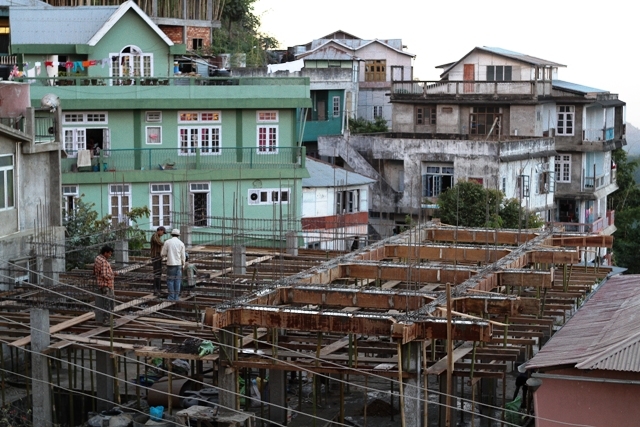 Regardless of why Chins leave for India, they often face abuses and discrimination there, activists and experts say. Lack of legal status means finding employment is particularly difficult, replicating the grinding poverty Chins experienced at home.

The IPCS analysis found that Indian border authorities do not monitor cross-border movements, and “a system to count Burmese, based on the issue of temporary permits, used to be enforced in Aizawl [Mizoram’s capital city] but has been abandoned.”

Hans Friedrich Schodder, deputy chief of mission for the UN Refugee Agency (UNHCR) in Delhi noted that “Applications from Chin asylum seekers to UNHCR in Delhi have dropped off over the past few years.”

However, border security officials in Mizoram tell IRIN the overall number of people crossing over from Chin State to Mizoram remains high, with most arrivals believed to be migrants seeking work.

Survival in the shadows

Chingarong lives in Aizawl and supports his wife and three children by selling goods at the side of the road. In twenty years of living in India, he has never been able to get a secure job. “When [employers] see I am from Burma they turn me away,” he said. His meagre income from roadside peddling means feeding his family is a daily struggle.

A 2005 research mission by the Human Rights Law Network, based in Delhi, India, found that “the majority of the Chins in Mizoram end up as cheap labour in domestic work, road constructions, agriculture work, including timber sawing in jungles, roadside vegetable vendors, scavengers in the jungle for roots, tubers, leaves and herbs,” or sometimes earn a living as street vendors.

Didim, 20, a Chin woman, came to Mizoram in 2007 and found employment as a domestic worker in the home of a family belonging to the indigenous Mizo ethnic community. Like many Chin domestic workers in Mizoram, she cooks and cleans seven days a week and sleeps in a small room, and is only allowed to leave the home to attend church on Sundays. Didim says sometimes families withhold pay or physically abuse their workers.

“If you complain to the police they are not sympathetic,” she said. Many Chins fear their lack of legal status in India means approaching the authorities will result in being sent back to Myanmar.

A 2011 report by a coalition of international organizations noted that “Chin women are least likely to go to the authorities for help.”

The India-Myanmar border taken from the India side. A small bridge connects the two countries. A small border post on the India side acts as an immigration depot where Chin refugees and migrants from Myanmar must register when they first cross the border 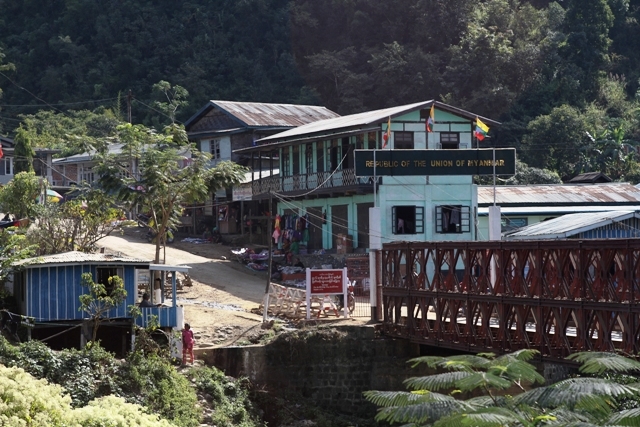 Zo Sangbuii, president of Women’s League of Chinland, which works in India and Myanmar, said she regularly arbitrates disputes between Chin domestic workers and Mizo employers. “We deal with matters of pay and long hours because most women will not risk taking a matter to the police,” she said.

For Chins working in forests or factories, an injury can mean the end of income. Zi, 19, told IRIN her family was not compensated after her brother, who was employed carrying heavy loads of wood out of the forest, suffered a debilitating back injury. “[The boss] withheld all the wages and said [we] couldn’t collect them because my brother could no longer work for him.”

Some Chins in Mizoram carry a stamped piece of paper they received at the border, allowing them to stay for one month, but most ignore the time limit and try to avoid any contact with officials, living in what IPCS researchers called a “legal loophole”.

According to the US-based NGO Refugees International, “India generally tolerates the presence of Burmese refugees, but does not afford them any legal protection, leaving them vulnerable to harassment, discrimination, and deportation.”

Those who want to apply for asylum must travel to the UNHCR office in Delhi, some 2,200km away. According to UNHCR approximately 7,000 Chins are registered as refugees in India as of 2013.

Tensions between the Chin and Mizo communities appear to have risen in the past year and have sometimes led to violent outbursts, exposing the tenuous position of Chins in India. “We are under pressure to return because people think democracy has come to Myanmar and that [means it’s safe] for us to return,” said David Ngun Lian, president of the Chin Refugee Committee, an NGO in Delhi.

In Aizawl, Mizo hostility towards Chins appears to stem from a new popular sentiment that the improved political situation in Myanmar means Chin migrants should return home.

On 29 April 2013, a mob torched the Chin village of Saikhumphai, 4km from the Myanmar border, destroying 40 homes and sending 200 people fleeing. Local media reports and rights activists said the violence was triggered by a court judgement ordering the government to halt plans to evict Chins in the village. Witnesses and news reports alleged the attack was carried out by residents of a neighbouring Mizo village.

“Mizoram people are jealous of us, they don’t want refugees to have any influence… they want us to leave,” said Satinkhama, 54, a church leader from Saikhumphai.

“The Mizos see that the Burmese migrants make up about 10 percent of the population in the state and get worried they’ll gain political power, which leads to backlash,” said Mirza Zulfiqur Rahman, co-author of the IPCS report. “The tension can get violent.”
Chins say the daily hardship and low-level abuses are increasing, including children being teased at school and traders being prevented from doing business in markets. “Local leaders and politicians use migrants as scapegoats for all evils,” said Rahman, pointing to common accusations that Chins are involved in alcohol manufacturing, which is illegal in Mizoram, and drug smuggling.

Lalhmachhuan, the president of the Mizo Student’s Association, which has been vocal in its opposition to Chins in India [denied putting pressure on refugees to return to Myanmar, but said: “So many refugees are engaged in this trafficking… we need to implement good laws and we need better control [of the borders].”

The superintendent of police in Aizawl District, L.R. Dingliana Sailo, said there have been increasing problems with drug trafficking between India and Myanmar along the Mizoram border, but migrants and locals share the blame. “There is a need to increase anti-poverty work, so refugees and locals are not tempted by illegal activities.”

Community on the mend?

Since the violence in Saikhumphai in April, church groups and local NGOs have tried to reignite a sense of brotherhood between Mizos and Chins by reinforcing their shared ancestry. Mizoram and Chin states once formed a pre-colonial territory called Chinland, and most Mizos and Chins are Christians.

“We have been engaged in soft advocacy,” said Terah Thantluang, field director for the Chin Human Rights Organization in Mizoram, which runs a regular column in local newspapers in an attempt to portray Chins in a positive light.

Meetings between Chin and Mizoram students have helped encourage a sense of unity, but some worry that the peace is fragile. “It only takes a spark to ignite trouble,” Thantluang said.