With the predominantly Tutsi rebel group M23 routed and vowing to disarm, attention is shifting to how to cement and extend peace across eastern Democratic Republic of Congo (DRC) and ease the decades-long suffering and deprivation of millions of civilians.

Since 25 October, Congolese troops, backed by a new UN intervention brigade, have driven M23 fighters from their fortified strongholds in North Kivu Province, in a series of surprisingly successful operations.

The triumph has raised hopes of better times ahead for one of the world’s most turbulent regions. Civilians in the area reportedly welcomed the M23’s defeat. A jubilant Martin Kobler, head of the UN Stabilization Mission in DRC (MONUSCO), was filmed shaking hands with smiling residents in “liberated” villages.

But observers caution that the military triumph is only a first step towards stability in a region long plagued by lawlessness and bad governance, beset by ethnic and political tensions, and awash with weapons.

“The M23 is only one of many armed groups operating in the eastern DRC,” said Stephanie Wolters, an analyst at the Institute for Security Studies (ISS) in Pretoria. “There are many others that have long rendered the lives of the population in these parts a living nightmare, and that still need to be tackled politically and militarily.”

Experts say the reorganized FARDC, as DRC’s national army is known, and the newly offensive UN force must continue to work in tandem if the cycle of violence in eastern DRC is to be broken.

M23 is just the latest in a series of ethnic-Tutsi led militias that have operated in the hills close to the borders with Rwanda and Uganda. As many as 45 other rebel groups are currently operating across the region, where the DRC government has little control.

Militant groups have been accused of gross human rights violations, including executions, using rape as a weapon of war and conscripting children. Government forces have also been blamed for atrocities. The violence and instability have hampered efforts to extend basic services, including health care, and to alleviate poverty.

DRC President Joseph Kabila shook up the command of the army after security forces put up no meaningful resistance as M23 gunmen seized Goma, the capital of North Kivu, in November last year. Having humiliated the government and the UN, whose peacekeepers proved equally powerless, the rebels withdrew a few weeks later. 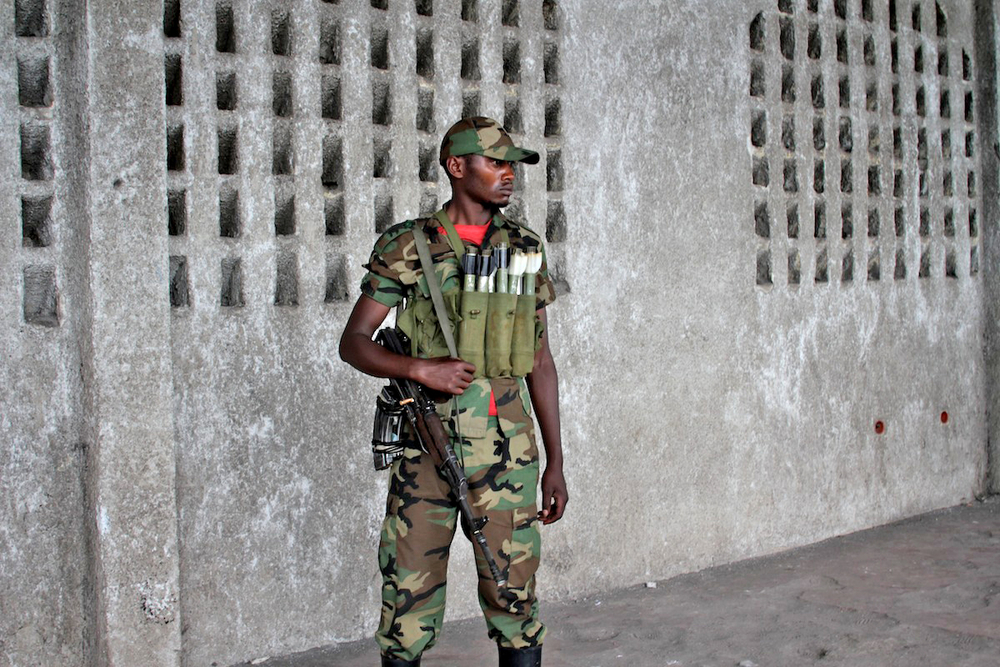 Military analyst Darren Olivier said the new FARDC commander in North Kivu has cracked down on ill-discipline, raised morale and turned his troops into a capable force. The troops were well prepared and supplied for their assault on the M23, he said.

“This has interesting implications for the potential of FARDC to eventually be able to maintain a monopoly of force in the eastern DRC,” Olivier wrote in the African Defense Review.

Creating such a monopoly should prove easier with the support of the UN Force Intervention Brigade, the 3,000-strong unit deployed earlier this year in a demonstration of the international community’s determination to break the cycle of violence in eastern DRC. Unusually for UN missions, the brigade is mandated to carry out targeted offensive operations to help government forces eliminate armed groups.

According to Olivier, the UN force played a crucial role in the battle against the M23 by allowing government troops to fight simultaneously on three fronts, dividing and weakening the rebels as they tried to defend their fortified redoubts north of Goma.

Wolters of the ISS said the M23 defeat and the impact of the UN brigade (made up of troops from Tanzania, South Africa and Malawi) sends a strong message to other armed groups.

“It may prompt them to consider the advantages of a negotiated solution over a drawn-out military campaign. If it really wants peace, Kinshasa will then have to react quickly to capitalize on this and to engage in robust negotiations that can bring a real end to the violence,” Wolters said.

How Kinshasa deals with the M23 may indicate how willing it is to make concessions to other rebel groups in the name of a national reconciliation programme.

Under a multilateral framework agreement signed under UN and African Union auspices in March, DRC is committed to a far-reaching reform programme designed to tackle the root causes of instability and rebellion.

"The M23 is only one of many armed groups operating in the eastern DRC. There are many others that have long rendered the lives of the population in these parts a living nightmare, and that still need to be tackled politically and militarily."

As well as pledges on reconciliation and democratization, the government promised action to overhaul its security forces, consolidate state authority in the east and prevent armed groups from destabilizing neighbouring countries. The plan includes detailed benchmarks at national, regional and international levels to measure progress.

However, peace talks with the M23 in the Ugandan capital Kampala had dragged on for months and were already stalled when the military push changed the facts on the ground.

Russ Feingold, the US special envoy to the region, said on 6 November that a still unsigned agreement between the government and the M23 contains detailed provisions for disarming and demobilizing the rebels and for protecting them from other armed groups.

French permanent representative to the UN Gerard Araud said DRC negotiators were reluctant to sign “a sort of agreement between equals” after the rebellion had been crushed.

The DRC parliament also has yet to pass a national amnesty programme. Western diplomats are pushing strongly for those accused of war crimes or crimes against humanity, including several M23 commanders, to be excluded from the amnesty and held accountable.

Feingold contrasted this approach with the failed peace agreement of 23 March 2009, from which the M23 movement took its name. While the 2009 deal “did give that kind of amnesty to people who committed major crimes… there’s no impunity in this, this time,” Feingold said. “The goal here is to make sure this can’t happen again.”

He said a successful conclusion to the Kampala talks could open the way for substantive talks between countries in the region. “Without that, this is not likely to be a successful effort to get at the root causes.”

Population fleeing their villages due to fighting between FARDC and rebels groups, Sake North Kivu the 30th of April 2012 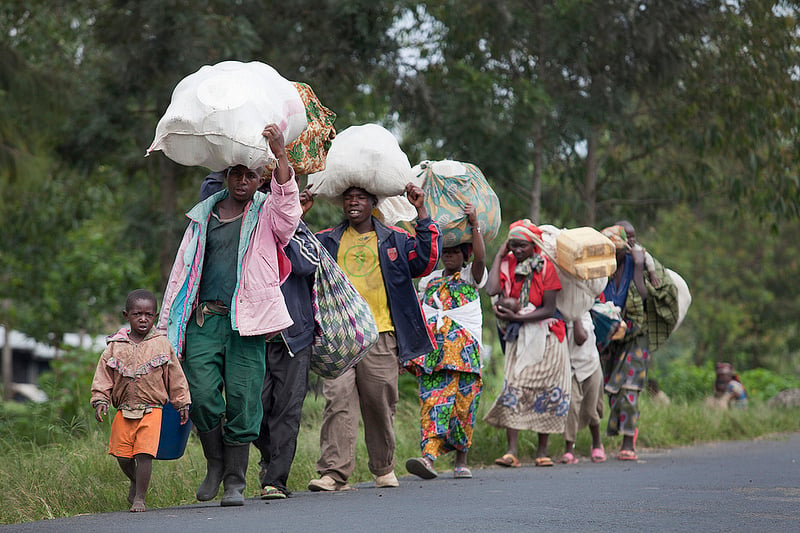 Yet there is concern that success against the M23 could leave Kinshasa feeling less compelled to meet its obligations under the framework agreement and deliver on its reform pledges, which include the establishment of the special courts.

With the M23 defeated, Kabila could “shake off some of the pressure on him to carry out national reforms and would be buoyed by the popularity such a victory would certainly bring,” said Jason Stearns, a former UN expert on DRC.

While the enhanced capabilities of FARDC and UN were important in defeating the M23, some analysts argue that the rout also reflects a Rwandan decision to withdraw support for the rebels in the face of intense pressure from the international community.

There is speculation that Rwanda has secured assurances that the next target of military action in DRC will be the Democratic Forces for the Liberation of Rwanda (FDLR), which includes ethnic Hutus who fled Rwanda after the 1994 genocide.

“They should have done this some years ago. I hope that this time they will tackle the FDLR. They have to,” said Rwanda’s UN Ambassador Eugene Gasana.

If Kigali feels short-changed, analysts warn that it could reactivate the M23 or arm another ethnic Tutsi-led proxy force in DRC in order to protect its security and economic interests.

France’s UN representative Araud said on 7 November that FDLR was “on the front line” of the rebel movements to be tackled next. Diplomats have named the Allied Democratic Forces, an Islamist group opposed to the Ugandan government, as an additional priority.

Rwanda has accused DRC forces of collaborating with the FDLR, something that Kinshasa denies. UN experts have in turn accused Rwanda of supporting the M23, a charge rejected by the government in Kigali.

Some observers warn that the ethnic Tutsi communities in Kivu will remain fertile ground for future rebellions unless they are given more social and political representation, and unless long-standing land and citizenship issues are addressed.

This week, Oxfam expressed concern that the space left by defeated M23 forces could simply be seized by other rebels.

In the short term, the government and UN are keen to restore civilian control in the areas previously held by M23. In a gesture of goodwill, the provincial authorities reportedly vowed not to collect any taxes until next year.

“It is up to the government to take responsibility and bring development to the economy as well as to the administration,” Kohler said while touring former rebel strongholds.