On a rocky patch of wind-swept desert 80km east of the Jordanian capital Amman, teams of construction engineers are hard at work erecting metal shelters.

Welcome to Azraq, soon to be the newest - and possibly the most planned - refugee camp in the world.

The 15sqkm site has been under construction since April, affording the UN Refugee Agency (UNHCR) - which is used to setting up camps in a matter of weeks rather than months - the rare luxury of time.

No one is quite sure when Azraq Camp will open, but already there are schools, playgrounds, child-friendly spaces, food warehouses, an arrival and registration area, health posts and a fully-equipped hospital.

Instead of tents, specially-designed metal-frame shelters are being arranged in small family clusters close to latrines and washing facilities.

Many see Azraq as an important opportunity for UN agencies to correct some of the mistakes made at the now notorious Za’atari Camp, which was opened in a rush last summer in the northeast of the country in order to respond to a sudden influx of Syrian refugees and is now home to some 120,000 people. It has struggled ever since due to overcrowding, poor sanitation, vandalism and crime.

“We had 10 days to establish Za’atari and we had one hand tied behind our back due to lack of funding,” explained Andrew Harper, UNHCR representative in Jordan. “We responded I think as well as we could, given that we had up to 3,000 people arriving a day…

“But with Azraq, we have had the opportunity to put in place the best practices that we know and that should have been put in place at Za’atari, had we had the time and resources to do so.”

A series of separate villages

The site on which Azraq is built was briefly used in the early 1990s as a resettlement camp for third country nationals fleeing Kuwait and Iraq during the First Gulf War. It was resurrected to accommodate an ever-growing number of Syrian refugees; UNHCR engineers used satellite images of the old camp to help them design the new facility.

Central to Azraq’s planning has been a focus on fostering communities within the camp to help refugees feel a sense of ownership over the facilities there.

Bernadette Castel, the senior UNHCR field coordinator for Azraq Camp, told IRIN: “I think the most important change is that the services are going to be decentralized from the beginning.

“What you had at Za’atari was that services were all in one place on one side of the camp... Here we are developing separate villages. So the idea is that the refugees in each village will have their own community services, like primary health posts and child-friendly spaces and that should reduce congestion.”

In addition to improving access to services, aid workers hope that people who feel more ownership of their facilities will be less likely to vandalize the playground next to their house, for example, or to steal from someone in their village if they are known by name by the community police officer.

With more personal service, people will be less anonymous and - the hope is - more willing to work together instead of against one another, both among themselves and with aid workers.

Each village - expected to house 8,000-15,000 people - will be separated into lots where there will be 12 separate shelters sharing two water, sanitation and hygiene (WASH) stations, one for men and one for women.

The plan is for families and people from the same areas in Syria to be housed together, with additional spaces left empty to accommodate relatives arriving later, where shelters or tents can be erected as required. Part of the reason the layout of Za’atari became so chaotic was that families moved their tents and caravans from their allotted spots to be closer to friends and family.

Aid workers believe bathrooms will be kept cleaner and more intact if they are more private and shared by families. Shorter distances to the latrines will also prevent the protection concerns that existed in Za’atari over women and girls having to travel long distances to access bathrooms, especially at night.

“We hope by grouping families together to share the WASH facilities, we can facilitate a sense of ownership and avoid some of the problems we saw in Za’atari associated with large numbers of people using communal latrines,” Castel said.

“A lot of this camp has been based on what refugees experienced in Za’atari themselves, so we are trying to take on those direct lessons,” she added.

One of the big challenges for refugees living in Za’atari, as well as for aid agencies working there, is its desert location and inclement weather, either scorching hot or freezing cold.

Azraq is located in the middle of the desert, some 20km away from the nearest town of the same name. Its climate is as forbidding, if not worse, due to a propensity for strong winds that create daily sand tornadoes.

“At times it has actually been hard to do our site work,” one aid worker complained, “so it’s hard to imagine how it will be living here for a long period of time.”

After all the desert-related struggles of Za’atari - including sand-triggered respiratory infections and difficulties in providing water, why would authorities and aid workers even consider building again in the desert?

Feda Gharaibeh, director of the Humanitarian Relief Coordination Unit at Jordan’s Ministry of Planning & International Cooperation (MOPIC), which allocated the site, said there was no other choice.

“This is Jordan. Most of our land is desert. There is no perfect place for a camp. You must also remember that there have been people living in villages in Mafraq [governorate] and Za’atari [town] for many years and surviving the same weather conditions as Za’atari [camp].”

The innovative metal shelters are meant to better protect refugees from the harsh conditions at Azraq than the tents initially used in Za’atari. They are six metres long and 4.5 metres wide with raised ceilings high enough for people to stand comfortably and a double-clad steel tube frame to offer winter insulation as well as protection from the heat and winds.

“There are wind speeds here of up to 60 or 70km per hour, so you can’t use tents; they wouldn’t last very long,” said Zakariya Amayreh, a Jordanian project officer with the Norwegian Refugee Council (NRC), which is leading the shelter installation at Azraq.

“That is why we have designed these shelters. It is the first time they have been used in the world and they are a unique design especially for Azraq,” he added with pride.

In each unit, there are two windows that open, ventilation holes, a lockable door onto a side porch entrance for extra privacy, and several metal curtain lines to allow for flexible space division inside the main room.

The only part of the shelter that has not been provided is the floor, which has been left as sand for the refugees themselves to cover.

“Hopefully it will increase their sense of ownership of the structures and help make them feel at home,” Castel said.

Azraq is located in the middle of the desert, 80km east of the Jordanian capital Amman 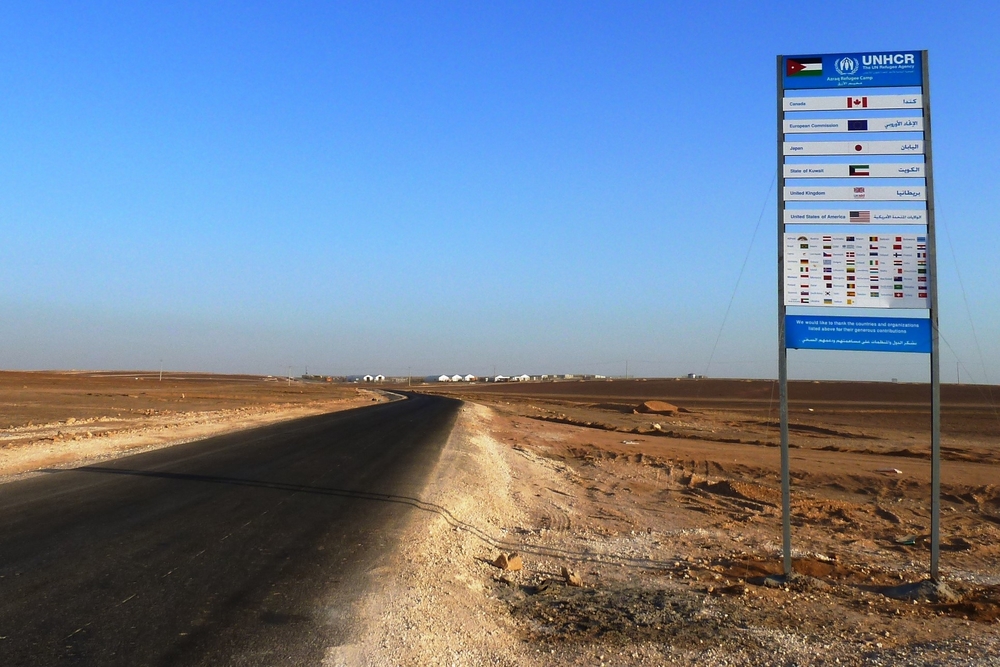 To provide better insulation in winter, the floors will be raised, either with panels or concrete, with the final design still being worked on, Amayreh explained.

With an individual price tag of around 1,450 Jordanian dinar (US$2,050), the shelters are significantly more expensive than tents, which cost up to $850 each including delivery, but they are expected to last much longer than tents, which usually need replacing every six to 12 months.

The shelters, pre-fabricated off-site by three different Jordanian firms, were designed in consultation with Syrian refugees from Za’atari. They are cheaper than the container-style caravans donated by Gulf States to Za’atari, which can cost as much as 2,500 JD ($3,500).

The shelters can be easily removed and transported back to Syria by the refugees, should there be an opportunity to go back.

Just over 200 shelters have been erected so far and the plan is to put up 5,000 in the first phase of the camp, catering for up to 50,000 people across four villages.

But for all the building that is going on at Azraq, and the 600 UNHCR staff that are ready to be relocated there as soon as it opens, there is one key component missing: the refugees.

The site, which staff say is ready to go, had been slated to open in July, but has been pushed back indefinitely. In recent weeks, some NGOs have withdrawn workers from the site, moving them back to Za’atari or to other urban-focused projects. Donors are beginning to wonder what is happening to their investment.

UNHCR’s Harper said it is up to the government to decide when the camp will be used, but added: “It is hard to justify opening Azraq when we are only receiving 300 or so people a day.”

Jordan is home to more than 540,000 Syrian refugees, the vast majority of whom live outside Za’atari camp in towns and cities. In recent months, thousands have returned to Syria while at the same time, some refugees have reported having a harder time crossing into Jordan.

“When we had large numbers crossing the border, we moved forward with preparing the camp,” Harper said, “but since then those numbers have decreased and we’re seeing a decrease in the numbers at Za’atari, so there is some spare capacity there.”

Gharaibeh from the Ministry of Planning told IRIN the government was waiting on the results of a UNHCR survey at Za’atari to know the exact number of people living there. The count is expected to be completed by the end of October.

“It’s very expensive to open a camp and to introduce all the facilities, with food, water, electricity, etc, so we try our best to utilize Za’atari camp to the utmost and then start to move people to Azraq,” she said. “If we receive a sudden influx, then people will be moved to Azraq camp, so it’s mainly for emergency.”

Asked if the camp may not open at all, she said: “It is not clear yet,” repeating: “It’s very expensive to run a camp.”

“Given the size of the operation, the number of people already killed in Syria, that over four million are displaced inside the country, two million more are refugees and no political solution is in sight… it would be irresponsible for us not to be properly prepared.”