He used to earn more than US$2,500 a year from his 2.4-hectare paddy field, located in a Muslim village adjacent to his ethnic Rakhine community, Pike Sake, in Myanmar’s Pauktaw Township. He used to hire Muslim day labourers to cultivate his field.

“I won’t earn anything this year,” the 45-year-old father of three told IRIN. “Everything changed overnight. I lost everything.”

His story underscores the broader implications of last year’s deadly inter-communal violence between ethnic Rakhine Buddhists and Rohingya Muslims, particularly in the area of livelihoods, which has been largely off the radar screens of donors.

“People of both communities, living in IDP camps, face difficulties to have access to livelihoods, such as fishing and farming, and markets to earn incomes,” Ashok Nigam, the UN Humanitarian Coordinator in Myanmar, told IRIN. “The thousands of IDPs in Sittwe who were neither farmers nor fishermen need livelihood opportunities. This is of critical importance for durable solutions towards decreased dependency on humanitarian assistance and to bring hope back to these communities.”

According to the UN Food and Agricultural Organization (FAO), rice production, fishing and aquaculture, and, to a lesser extent, trade, were the primary forms of livelihood in Rakhine State, with rice paddies accounting for an estimated 75 per cent of land usage.

Ethnic violence between the communities in June and October 2012 left 167 people dead and more than 10,000 homes damaged or destroyed. Now, more than one year on, the economic fallout has yet to be fully realized, say experts.

While the international community continues to focus its response on the immediate needs of the more than 140,000 displaced - most of them Rohingyas - in more than 70 overcrowded camps and camp-like settings, little attention has been paid to the vast majority of Muslims still living in their communities, or to neighbouring Buddhist communities, whose livelihoods have been shaken.

It is estimated that 36,000 individuals live in isolated and host communities in Minbya, Myebon, Pauktaw, Mrauk-U, Kyauktaw and Sittwe townships, with little to no access to assistance, the UN Office for the Coordination of Humanitarian Affairs (OCHA) has reported.

And many believe the true scale of the need is much greater.

“The numbers are much higher than [those] being reported, and more complex than we think,” said one international aid worker who asked not to be identified.

In addition to large-scale displacement and the loss of productive assets - including fields, livestock, fish and shrimp farms, farm tools, as well as livelihood-supportive infrastructure - restricted movement and limited access to markets and surrounding natural resources have limited economic opportunities, the UN reported, particularly for Muslim internally displaced persons (IDPs).

According to a World Food Programme (WFP) assessment of non-displaced persons, conducted in January 2013, the historic socio-economic interactions that once existed between Muslim and Buddhist Rakhine communities have largely ceased.

A Rohingya IDP in Pauktaw with his cow. FAO has reported a substantial reduction in livestock through consumption of stock to compensate for lack of other food inputs and sale for alternative income, following two deadly bouts of sectarian violence in Rak 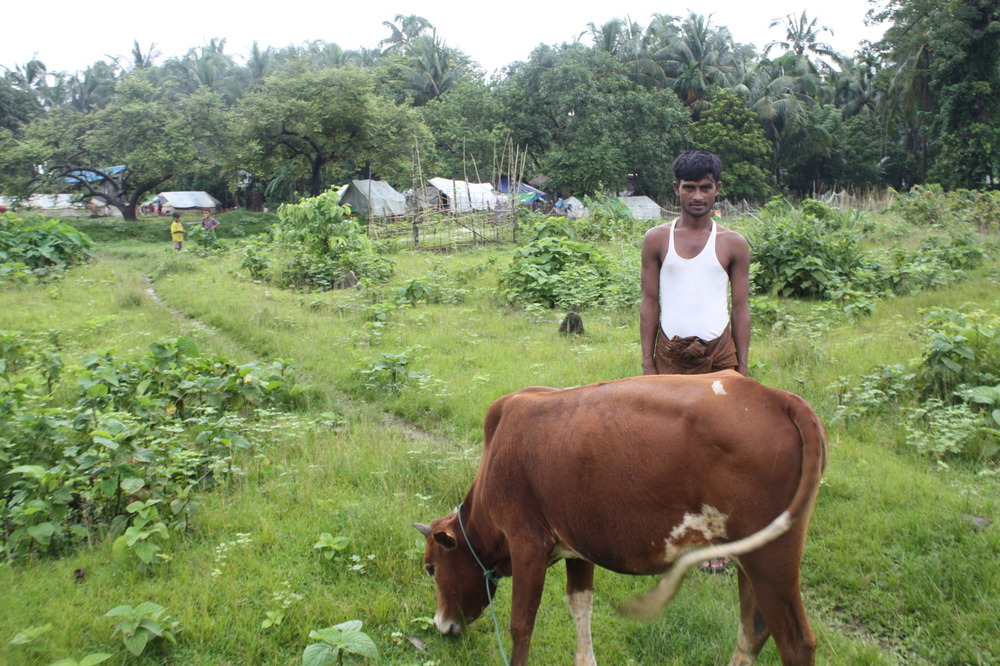 At the same time, movement restrictions, including curfews and fears of attack, continue to have an adverse effect on income-generating activities.

Although Muslim and Rakhine villages are separate in Rakhine State, it is not uncommon for them to be near one another. As a result, mutual cooperation and the sharing of resources were common prior to the conflict.

But today, access to productive lands and activities such as fishing - both in rivers and on the open sea - remain restricted due to communal tensions, the WFP report noted.

“I still have my boat, but wouldn’t dare go to sea now. It’s too dangerous,” said Mg Hla, a 52-year-old Rohingya fisherman from the fishing village of Sin Tet Maw in Pauktaw. The village's population has spiked in recent months to more than 10,000 following the arrivals of some 5,000 IDPs from Kyauk Phyu in October 2012, and another 7,000 IDPs from Nget Chaung, who arrived ahead of the predicted landfall of Cyclone Mahasen in May of this year.

Once earning $120 per month, Mg Hla, a father of seven, is lucky to earn half that amount now.

Many communities used rivers and creeks to access the sea for fishing. But downstream communities are using threats or intimidation to deny ocean access to upstream members of the other community. Many fishermen are finding their river access has been curtailed, as well.

As a result, virtually all rivers and creeks are now divided into areas dominated by either Muslims or Buddhists. Muslims say they are refraining from travelling to the town of Sittwe altogether.
And even when they are able to fish, they are often blocked from reaching the local markets.

“I used to be able to take my fish to the Sittwe market. It’s too dangerous for me to do that now,” Mg Hla said.

According to an FAO needs assessment released earlier this year, undertaken in 17 villages in Sittwe, Mrauk Oo and Pauktaw townships, residents cited access to land as one of their biggest challenges.

Of the 161 to 323 hectares of farmland each village owned, only 25 to 30 percent appeared to be under cultivation when the assessment was conducted, due to security concerns, the report revealed.

Land abandonment appeared to be the result of mutual exclusion, where adjacent Muslim and Buddhist communities denied access to each other’s land through violence, threats and intimidation.

In some villages, there were no threats or violence, but rather the perceived risk of it, which proved sufficient to stop or limit farmers' access to their fields, the report noted.

Mg Hla, a 52-year-old Rohingya fisherman from Pauktaw won't take his boat out to sea due to insecurity following two deadly bouts of sectarian violence in Rakhine State in 2012. Fishing is a major source of livelihood for many residents 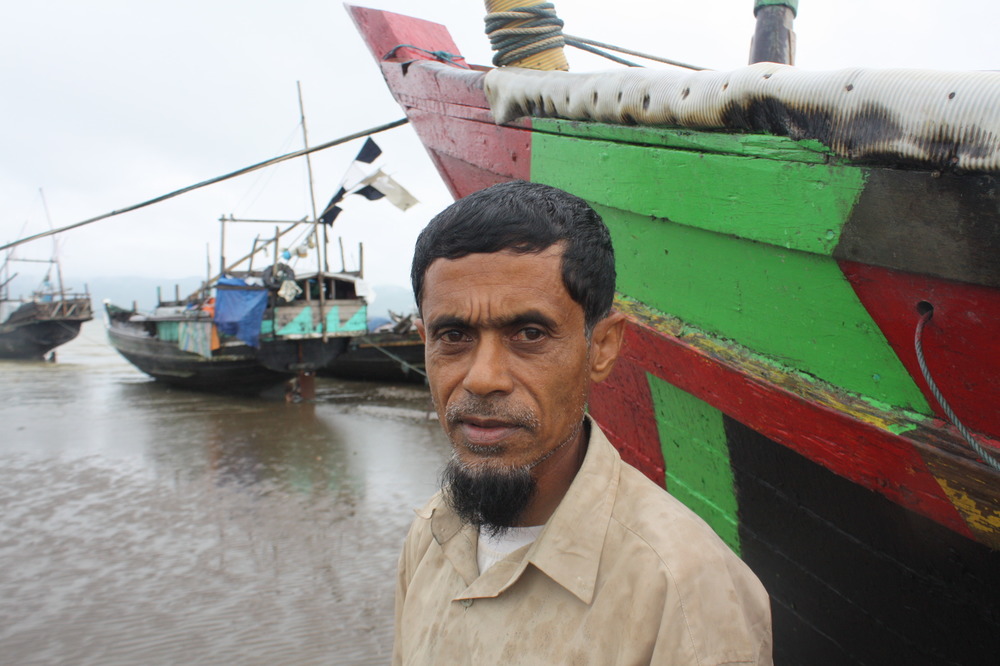 According to a post-crisis livelihood and early recovery sector assessment undertaken by the UN Development Programme in February, Muslim communities cited movement restrictions and restrictions to market access as the main barriers to economic recovery.

Access to the labour force has also been limited. In the past, Muslim villages were net suppliers of labour and Buddhist villagers were net purchasers, due to disparities in land holdings and population sizes.

“I used to have seven Muslim workers cultivate my land,” Hla Win confirmed. “Even if I could access my land now, I still wouldn’t be able to get the labourers to work it.”

According to FAO, Buddhist villages are disproportionately affected by labour shortages and high labour costs, while Muslim villages are suffering from acute unemployment. The cessation of these economic interactions has had a ripple effect, WFP said, limiting productivity for both communities.

Purchasing power has subsequently declined, leaving many unable to afford basic food needs, the January assessment found. This has lowered demand in the marketplace and forced farmers to sell goods at lower prices, making it increasingly difficult for farmers to pay back loans taken to purchase agricultural inputs.

All this is taking place in one of the least developed parts of Myanmar, an area characterized by high population density, malnutrition, low income, poverty and weak infrastructure, compounded by recurrent storms and floods.

According to the latest Integrated Household Living Condition Survey (2009-2010), Rakhine State ranks second worst in terms of poverty (after Chin State), with 43.5 percent of residents living in poverty compared to a national average of 25.6 percent. Ten percent of the state lives in “food poverty”, compared to the national average of 4.8 percent.

The state has also been affected by two major disasters in recent years: flood and mudslides in northern Rakhine in June 2010 and Cyclone Giri in October 2010, affecting 29,000 and 260,000 people respectfully. These events also resulted in the loss of lives and livelihoods, reported the Humanitarian Country Team's $109 million revised interagency Rakhine Response Plan, released in August.

Agencies report that over 800,000 vulnerable people in the northern townships of Rakhine could face chronic humanitarian problems, mainly due to poor access to basic services, restricted movement and lack of clarity over their legal status.