In the northern Iraqi province of Kirkuk, a 58km trench is being dug around Kirkuk City to protect it against violence, as regular bomb attacks and assassinations threaten the safety of its multi-ethnic residents.

But experts say this, like other recent security measures, will ultimately do little because it fails to address the root causes of the violence.

Oil-rich Kirkuk Province is at the heart of a power dispute between the central government in Baghdad and the semi-autonomous Kurdish region in the north, ruled by the Kurdish Regional Government (KRG). In the centre of Kirkuk City, many different languages can be heard; Arabs, Kurds, Turkmen, Sunni, Shia and Assyrian Christians all live together here, and citizens from each group crave security.

The trench is part of a wider step up in Iraqi security this year, nationwide. Rates of violence in July peaked to numbers not seen in five years. Early this year, officials announced the tightening of security check points in the city as deadly attacks continued to kill dozens.

Bomb attacks across Iraq killed at least 58 people on 15 September, following at least 21 deaths in a funeral bombing a day earlier. Coordinated sectarian terror attacks now happen every few days, as local and national leaders argue over the best way to end the violence. The International Crisis Group (ICG) said in a recent report that “a revived sectarian civil war is a serious risk.”

In Kirkuk, one particularly brutal suicide bomb in a cafe left over 30 people dead on 12 July. The police response to this was to close all cafes in the city for three days.

At the end of August, Brigadier General Sarhad Qadir, a police chief in the city, told Rudaw news, an Erbil-based online newspaper, that Kirkuk’s police force could not cope: “The armed groups can carry out attacks anytime and anywhere they choose because they are unhindered.”

At an estimated cost of around US$2.8 million dollars, the trench will be 3m wide and 2m deep when finished, according to Qasim Hamza, a deputy minister in the Kirkuk Provincial Council.

“The project will reduce terrorist attacks against the people of Kirkuk,” Hasan Toran, head of the Provincial Council told IRIN.

But the security trench is already controversial. Arab and Turkmen farmers to the south of the city complain that the trench cuts through their land and cuts them off from their water source.

“Our livelihood is the land,” said Salah Sami, who keeps livestock in the village of Chardaglu, 12km south of Kirkuk. “If they don’t deliver water to us, villagers will migrate from this land…We have nearly 10,000 animals that may die of hunger.”

But Toran said any “attacks against farmers” would be more than offset by the added security the trench brings to the city.

Meanwhile, Arab politicians in Kirkuk worry disillusionment with the majority Kurdish provincial government could further inflame ethnic tensions in the city. Experts say marginalization of Sunni Arab farmers could strengthen terrorist groups operating in the area, who feed off disenchantment with the local government.

Responses to the spike in violence

Analysts say the trench may stop a small percentage of attacks in the city in the short-term, but that armed groups will eventually find ways to adapt.

“So far, there appears to be little appetite by political leaders for the compromises necessary to halt the escalating violence,” ICG said in its monthly CrisisWatch. “Instead, the government has requested from the US additional weaponry and intelligence support in order to ‘combat terrorism’.” In August, the government arrested over 670 people, ICG said, as part of a new military operation called “Martyrs’ Revenge”.

The operation focused on large-scale arrests of suspected “terrorists” in predominantly Sunni Arab areas on the outskirts of the capital, Baghdad, as well as seizures of weapons. While the operation saw some successes, it - like the Kirkuk trench - also poses some risks.

“Any short-term improvements in terms of security could be outweighed in the long-term if the Sunni community feels it is being targeted by the government for a crime they have not committed,” said Hayder al Khoei, associate fellow in the Middle East and North Africa programme at Chatham House in London.

Experts say the rise in violence in Kirkuk Province is linked to the growing strength, nationwide, of al-Qaeda and other extremist groups in recent months. Instability stemming from power-sharing disagreements makes Kirkuk an easy target for the groups.

“There is no equality in power-sharing in Kirkuk,” said Mohammed Alkelal, head of the Arab group on Kirkuk’s Provincial Council. “The security power is controlled by the Kurdish groups.”

In April, security forces of the Shia-led national government violently suppressed Sunni Arab protests against the government in Hawija, south of Kirkuk City. Clashes in the aftermath resulted in dozens of deaths. The incident has led to an increase in violence across the country, analysts said, and Alkelal says violent crackdowns like this have added to Kirkuk’s ethnic tensions.

In order to ensure their protection, a growing number of Turkman in Kirkuk are calling for the establishment of their own police force to secure Turkman areas. 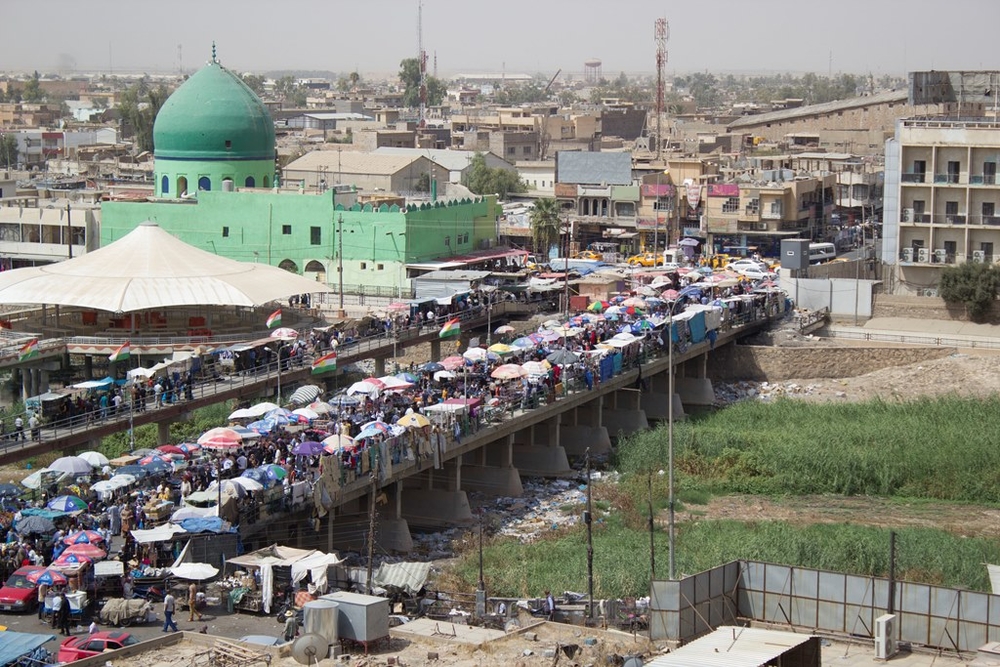 “We want policemen for the Turkmen just like the Kurds have the ‘asayish’,” said Shia Turkman resident Mohammed al Salihe, referring to the KRG’s security forces. “We want power for the Turkmen in Kirkuk and a police force to be in the Turkmens’ streets. We feel this will increase security, and it will be a safer place.”

Al Salihe lives close to a police academy and a Shia mosque - both targets of attacks. The 12 July café bombing was also near his home.

The push for ethnically defined security forces is part of a wider trend, as the central government has called on tribal leaders to re-establish ‘Sahwa’, or Awakening, forces across Iraq, to stem insurgencies and localize security. The Sahwa forces were groups of Sunni Arab fighters established by the US military in 2006-7 to tackle Sunni insurgents, such as al-Qaeda.

It is another example, says Sinan Ismael, a Kurdish journalist working in Kirkuk, of taking the wrong approach to security. He believes the answers to Kirkuk’s problems lie in effective power sharing.

Another political analyst working for an NGO in Kirkuk, who wished to remain anonymous, said a move towards ethnic security forces will only damage hopes for cohesion, adding that elections are the only solution to the city’s problems.

But provincial elections have been delayed for years because of complaints from Arabs and Turkmen about the voter register, which they say includes an exaggerated number of Kurds.

“The first step has to be re-establishing confidence and initiating policies that will be inclusive,” said Ali, of the Institute for the Study of War.