After an absence of more than a year, Phay Ruscome could not wait to get back in the classroom.

"I like learning, and I missed my friends," the nine-year-old said. "I wasn't able to attend at all last year."

The community-led initiative - providing two-and-a-half hours of Burmese and mathematics a day- highlights the unmet needs of thousands of IDP children unable to attend regular school more than a year after sectarian clashes between Rohingyas and Buddhist ethnic Rakhine residents in 2012.

"It's difficult to teach like this, however, we don't have a choice," said Daw Sein Sein Mya, one of eight volunteer teachers now working three shifts a day in the sweltering heat to teach more than 800 primary school children in a 90sqkm makeshift classroom. "We have to think of their future."

According to the UN Office for the Coordination of Humanitarian Affairs (OCHA) more than 176,000 people are in need following two rounds of communal violence in June and October 2012, including more than 140,000 Rohingyas, most of them Muslim, displaced across more than 70 camps and camp-like settings in 10 townships.

One hundred sixty-seven people lost their lives and more than 10,000 homes and buildings were damaged or destroyed in the violence.

But aid agencies are still struggling over how best to respond to the thousands of children still out of school.

Of the 140,000 IDPs in camps, the majority around Sittwe, 60 percent are believed to be children under the age of 18, including an estimated 23,000 primary-school aged children, many of whom who could miss out on a second year of education if further action is not taken.

"Current needs are real - displaced children cannot be left without education for such an extended time," said Bertrand Bainvel, country representative of the UN Children's Fund (UNICEF), which is co-leading the Education Sector with Save the Children. 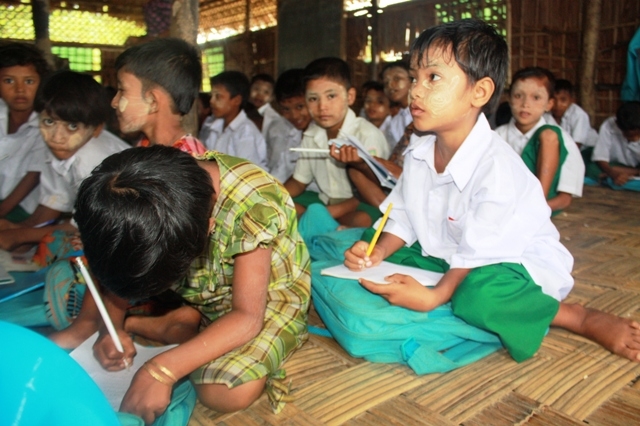 UNICEF considers education an integral part of any frontline humanitarian response - as important as food, shelter and healthcare.

Schools provide protection and help restore a sense of normalcy for children, enabling them to overcome the emotional trauma they have suffered, whether in natural or man-made disasters, the agency says.

But addressing that need in the context of Rakhine State - one of the most complex humanitarian crises today - is fraught with challenges.

The international community is keenly aware of the need to balance the humanitarian imperative against the risk of inflaming hostilities between the two communities. There are continuing perceptions of bias in the delivery of assistance, for example, and concerns that intervention could aggravate tensions further. And with so many Rohingyas living in displacement camps, separate from the Rakhines, there are fears that certain kinds of aid could entrench segregation.

"Initially there was hope that people would be able to return to their places [of] origin, so if you start setting up some more permanent services, it could be perceived as actually promoting and encouraging segregation," UNICEF's Bainvel explained.

Even before the conflict, this part of Myanmar suffered from some of the worst education indicators in the country; infrastructure was insufficient, and there was an acute shortage of schools and teachers.

In Rakhine State, net attendance for primary school-aged children (ages 6 to 10) was 76 percent, compared to a national average of 90 percent. In some rural areas of Rakhine, that rate was reportedly as low as 58 percent, studies revealed.

Illiteracy among the Rohingya community remains stubbornly high, and many Rohingya children cannot speak Burmese, the language of instruction in Burmese schools.

Meanwhile, ethnic Rakhine teachers, who comprise more than 95 percent of the state's teachers, remain unwilling or unable to teach in Muslim schools or areas, often due to pressure from their own communities, leaving a huge gap in the number of qualified teachers.

"This is easily one of most difficult scenarios I have ever worked in," said one international aid worker in Sittwe, who asked not to be identified. "And it's having a severe impact."

Then there is the responsibility of the government to lead the provision of inclusive and equitable education in all areas, however remote, starting with teacher recruitment, training and remuneration in IDP and other excluded communities, as recommended in the Rakhine Inquiry Commission, a 27-member commission set up by Burmese President Thein Sein.

A young Rohingya boy recites his lessons at a UNICEF-established temporary learning space outside Sittwe in western Rakhine State. More than 20,000 primary age children missed out on their education more than one year following two rounds of sectarian vio 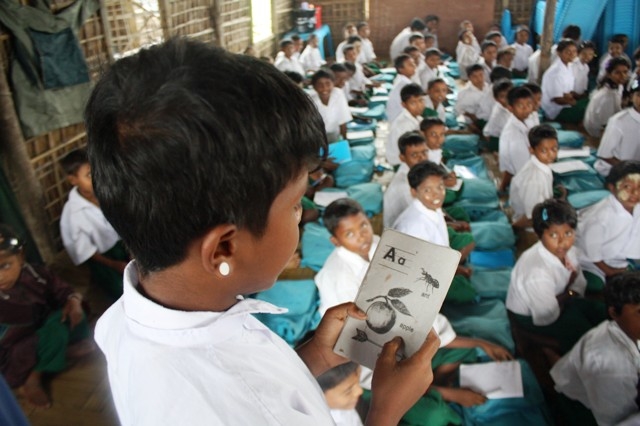 Although it has been involved in some response activities, and attends educator sector coordination meetings in Sittwe, the government has yet to share its own long-term plan for education.

"We hope to improve access to education for all the IDP children. We have limited resources, but would welcome further international assistance," Hla Sein Tun, deputy director of Rakhine State Education Department within the Ministry of Education, told IRIN. He refrained from providing further details.

So far, funding for further interventions has been limited, with donors increasingly looking for more durable educational options instead, as well as a clearer picture from the government of what is ahead.

According to the Financial Tracking System, of the $4.4 million requested for education through the end of the academic year (March 2014), only about $2 million has been secured, which, in turn, has resulted in a slow response by international agencies.

There are currently only three agencies and NGOs on the ground - UNICEF, Save the Children and the Lutheran World Federation - and the latter two are only now starting up.

But according to UNICEF's Bainvel, those activities need to be stepped up. "The children can't wait any more. We need to support temporary learning spaces [TLS] until we find more durable solutions."

Since July, UNICEF, in coordination with the government, has established 26 TLS in 18 camps in three townships - Sittwe, Pauk Taw and Mimbya - covering almost 50 percent of children in need, with plans underway to construct another 35 by the end of the year. Teaching and learning materials will also be provided, as well as volunteer teacher recruitment and support.

Daw Sein Sein Mya is one of eight volunteer teachers working three shifts a day in the sweltering heat to teach more than 800 primary age children at the Thea Chaung IDP camp outside Sittwe in western Rakhine State. Thousands of Muslim Rohingya children 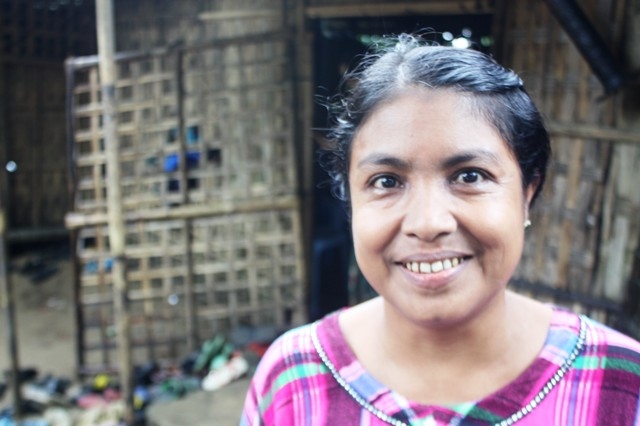 Under the programme, volunteer teachers receive training and a monetary stipend of $35 to $40 per month.

Once in place, the TLSs will cover approximately 85 percent of the emergency education needs of this age group. "These are temporary measures only, not permanent solutions," Bainvel stressed, noting that this is in no way meant to be a replacement for formal primary school education.

But while such interventions will temporarily address the education needs of primary school-aged children, little is being done with regard to the estimated 32,760 youth and adolescents also in the camps.

"There is a significant funding gap for post-primary age groups, and this is a major concern," emergency education coordinator Kitchingman said.

UNICEF and Save the Children plan to start a non-formal primary education programme that will offer a second chance to complete primary education for children 11 to 14 years old who have never attended school. The programme will cover over 9,000 children, leaving a gap of another 9,000 without access to education.

An additional 14,000 children aged 15 to 17 have no learning opportunities.

In addition to the camp population, an estimated 17,000 children living in host communities - many in remote areas only accessible by boat - are also deprived of their right to an education.

"We've got a huge amount of work ahead of us," UNICEF's Bainvel said. "As a way forward, we need to provide temporary learning opportunities to the displaced, but at the same time take a long-term development approach to the education situation in Rakhine."