Aid agencies responding to the Syrian crisis are updating contingency plans and pre-positioning stocks, warning that any US-led military action against Syria could lead to an increase in humanitarian needs.

“It’s already a complex situation with profound humanitarian consequences,” said humanitarian coordinator Yacoub El Hillo, the highest ranking UN humanitarian official in Syria. “If you’re talking about five million people displaced internally and two million people who are now refugees in neighbouring countries; if you have one million refugee children who are now away from their homes and their schools, this is already a dramatic situation. So imagine if this is to be compounded by a military strike? It will only add to the suffering,” he told IRIN, citing possible displacement of civilians, increased exposure to risk, and reduction in service delivery.

“Disruption to life is likely to happen and this will produce a lot of difficulties for civilians, which means more challenges for the humanitarian community to cope [with] and to deliver under these very constrained circumstances.”

On 31 August, US President Barack Obama announced he would seek approval from Congress to take military action against Syrian targets, as punishment for an alleged chemical weapons attack by the Syrian government which the US says killed more than 1,400 people. Syrian President Bashar al-Assad’s government denies responsibility for the attack.

"There is a state of panic in Damascus," according to Sham Land*, an activist in Damascus who documents civilian casualties for the Syrian Network for Human Rights and uses a pseudonym for security reasons. "People are lining up to get bread... Many people are preparing to leave the city, especially people who live near the government security buildings."

In the past week, the value of the Syrian pound has depreciated sharply, and fewer people are walking around on the streets or driving through the city in the evenings, Land, a 31-year-old former dentist, told IRIN via Skype. "Some people are preparing food and storing it. If they have a house in the countryside, they're leaving to go there," he said.

“Pro-Assad people” have started “running away and taking their families out of Damascus,” said Susan Ahmed*, 30, an activist living in a regime-held part of the city. Regardless of their political beliefs, “people are afraid” and some are fleeing to “safer areas”, she added.

More than two years of conflict between government and rebel forces in Syria have killed over 100,000 people, according to UN Secretary-General Ban Ki-moon, and driven more than six million from their homes, either internally or to neighbouring countries. But the capital Damascus has been largely spared from the worst of the fighting.

Although limited and targeted strikes would be unlikely to cause a significant increase in humanitarian needs, aid workers said, “there’s a lot of uncertainty about what the worst case is,” as one aid worker put it.

So far, the UN Refugee Agency (UNHCR) has noted no increase in refugees arriving at international borders.

And while a mass outflow remains unlikely, “we are preparing for it and accelerating all the stockpiling and the preparations at the moment,” said Roberta Russo, communications officer with UNHCR in Lebanon - the closest country for people fleeing Damascus.

On 28 August, UNHCR agreed with the Lebanese government to quickly set up reception areas at the Masna’a border crossing to be able to more easily provide medical care, counselling and referrals to refugees as they cross the border. Thousands continue to cross the border daily, while many simultaneously return to Syria.

Lebanon is already home to more than 710,000 Syrian refugees - equivalent to more than 15 percent of its original population - who are staying with friends and family, renting apartments, squatting in abandoned or half-finished buildings or establishing informal settlements. There are no formal camps for Syrian refugees in Lebanon.

“The shelter options are exhausted,” Russo told IRIN. “We can’t absorb any more.”

UNHCR’s efforts to obtain government permission to establish transit sites that could house 20-25,000 refugees each as a last resort have not succeeded. This could cause challenges in case of a mass influx.

Stocks at the Damascus branch of the Syrian Arab Red Crescent 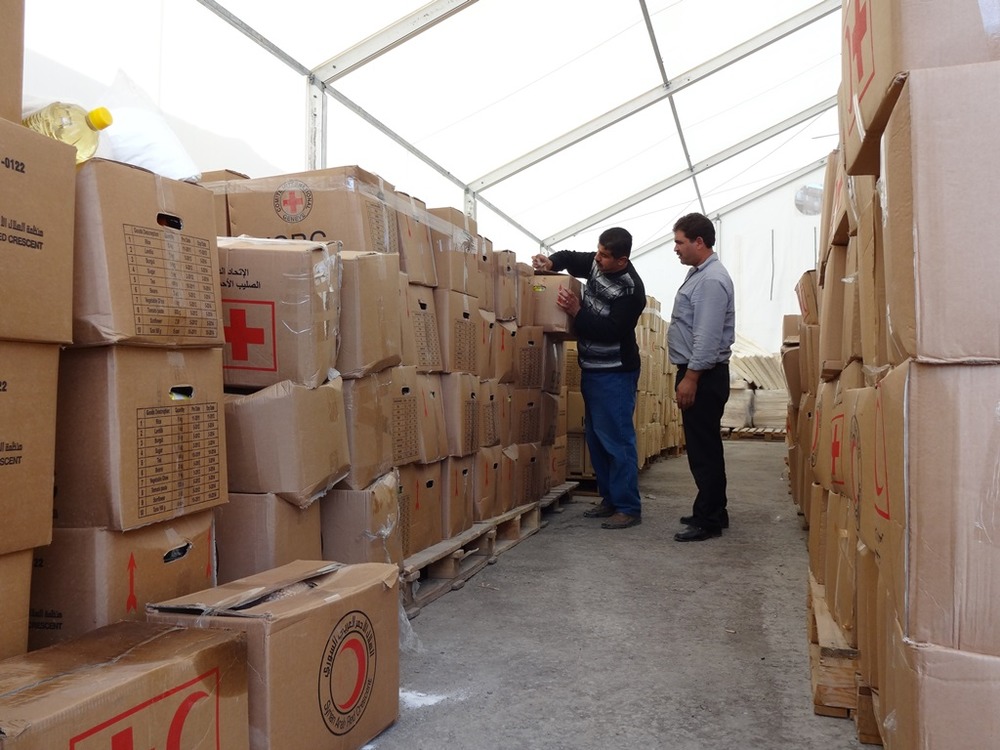 “We have informal settlements mushrooming everywhere. Some are also in flood-prone areas and the facilities are not good enough,” Russo said. “I don’t know what will happen if the government doesn’t agree.”

One major question is whether Lebanon, which has increased entry restrictions for Syrians and refused entry to Palestinians from Syria, and Jordan, which has limited the number of refugees it admits, will provide unrestricted access to anyone seeking refuge in the case of an escalation of violence.

UNHCR in Jordan is “well-placed” to handle any influx, the agency’s representative in Jordan, Andrew Harper, said, having grown accustomed to several thousand new arrivals a day, and with stocks in place for an additional 100,000 people.

Jordan’s Za’atari camp could take in at least 20,000 more people; and a new Jordanian camp, called Azraq, is set to open in two weeks with a capacity of 50,000.

UNHCR has a global stockpile of supplies - including tents, plastic sheeting and kitchen sets - in Dubai, currently enough for 350,000, according to UNHCR regional spokesperson Peter Kessler.

“Our job is to be prepared,” Kessler told IRIN. “We have to work to assist people in need and to plan for eventualities.”

But any influx will necessarily strain services that are already stretched in Za’atari and not yet ready in Azraq.

“It’s not the tents and the places to put them up that is the challenge,” one aid worker said. “It’s all the services and security which goes around the physical location of the new tent site, which is expensive and time-consuming to get ready, particularly provision of water, adjusting food distribution, having adequate security, ensuring the site is adequately drained. All of that is ongoing in Azraq.”

“The big message is,” he continued, “what are donors - over and above their current commitments for the response in Syria and the region - willing to commit for enhanced preparedness, particularly to increase stockpiles, to fast-track preparations for new camps in Jordan and to secure more funds for shelter programming in Lebanon?”

A UN-coordinated appeal for a record $4.4 billion to help Syrians already in need inside and outside their country in 2013 is currently less than 40 percent funded. Aid workers say donors are unlikely to focus on preparing for potential future scenarios as they are already squeezed between many crises and finite aid budgets.

“Our concern is: Are we able to pay for these supplies as quickly as we would need to deliver?” asked Juliette Touma, regional spokesperson for the UN Children’s Fund (UNICEF).

Describing the situation in Syria as a “humanitarian crisis of rarely precedented proportions”, El Hillo, the humanitarian coordinator, said donor funding must be predictable and timely. He said the UN was exploring the unusual step of requesting funding from its Central Emergency Response Fund - usually reserved for responding to actual rather than potential needs - to procure and pre-position supplies to be prepared for any eventuality.

Inside Syria, UN agencies have long struggled to meet rising needs, operating in a complicated bureaucratic and security environment, with limited funding and insufficient implementing partners.

“As it is, we are unable to fully respond to the needs as they exist now in the country because of insecurity, because of the difficulty of access, because of the enormity of the challenge and the needs,” El Hillo said. “There is an expectation that this is going to create new challenges in addition to those that already exist.”

Many Syrians have grown accustomed to violence and see potential US missile strikes as nothing more than what they have already experienced after two years of shelling, street clashes, suicide bombs, snipers and kidnappings. In many respects, daily life in Damascus continues.

But others fear foreign military attacks will kill or injure yet more civilians, even if bombardment has “become something very normal”, as activist Abu Yasin* put it. He said residents have set up bomb shelters for women and children.

“Regardless of what happens, our concern is that children be protected at all times,” UNICEF’s Touma said.

People are trying to stock up on “everyday” supplies, like first aid kits, bread and gas in anticipation of Western attacks, said Ahmad, the activist, but increased demand has meant that many basics - including children’s milk formula and bread - are not available and goods are very expensive. High demand for bread has been problematic on and off for months, she said via Skype, but the news of a possible foreign military attack has exacerbated the problem.

“People stayed [in lines] until midnight [on 29 August] trying to get bread,” she said. Instead of bread, she added, people are eating rice and bulgur.

Another resident of Damascus, who preferred anonymity, said many residents could not afford to stock up on supplies because of rising prices.

In other areas, there is little access in the first place. In the Rural Damascus town of Muadhamiya, there is widespread hunger, according to Omar Hakeem, a doctor. The area also has no communications network, water or electricity due to a year-long “siege” by al-Assad’s military forces, Hakeem, 26, told IRIN.

UN agencies in Damascus have vowed to maintain their operations as best they can despite possible US strikes. Most UN agencies work through local NGOs and the Syrian Arab Red Crescent.

El Hillo said agencies would use “all means possible” to meet any increase in needs, by expanding partnerships with local NGOs, charity organizations, third party deliveries through contractors or private sector arrangements.